Can water drip from a capillary tube top? Perpetual motion?

In a normal capillary tube (ex: tube A), where the water doesn't travel as high as the tube's height, h, the meniscus formed is "normal" (concave, as seen in tube A).

From previous posts, I determined that if the tube's height is lower than the height that the water can travel, the meniscus becomes less and less concave, and will become almost flat (as seen in tube B).

Furthermore, I learned that if the tube is bent downward, the gravitational force will result in the meniscus becoming convex (as seen in tube C). This force of gravity isn't strong enough to "pull" the water away and make it drip, because the force from the surface tension is greater. And this fact has killed many perpetual machines dreams.

However, I began wondering, if many bent tubes were positioned so that their top ends are very close together, allowing the meniscuses (or menisci?) to touch (like tubes D and E, except many more), would the meniscuses combine to create a water drop that will become large enough so that the surface tension force will be insufficient to hold the water up? And thus the water will drip down?

(Let's assume that the tubes are bent almost vertically down, so there is little chance that the water drop, if it forms, will attach to the outer edges of the tubes).

Any help is appreciated. Thanks in advance. 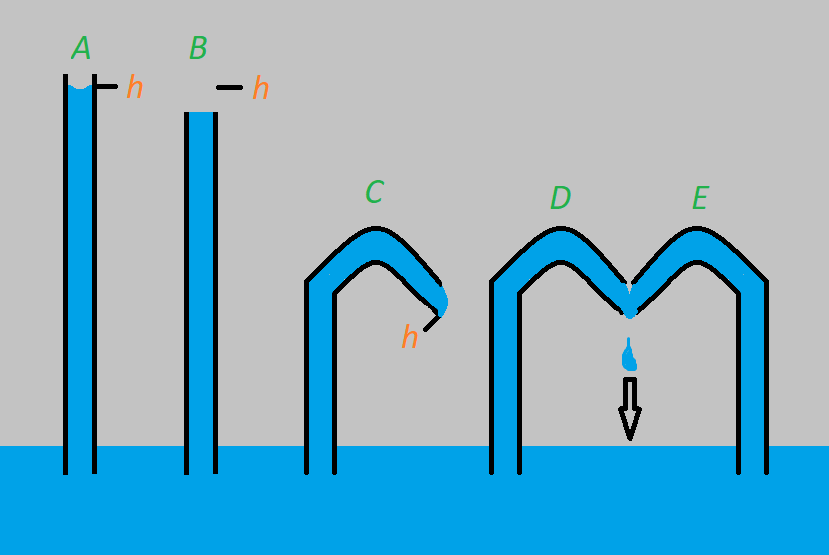 Browse other questions tagged water surface-tension perpetual-motion capillary-action or ask your own question.