I'm learning physics on Khan academy and i have stumbled upon a task that I cant completely understand and I'm a type of person that cant continue the studying until everything that I have read is perfectly clear.

If $m_1$ is a $1\ \rm kg$ mass spinning in a circle of radius $1$ meter and $m_2 = 4\ \rm kg$. What is the angular velocity, assuming neither mass is moving vertically and there is minimal friction between the string and the tube? 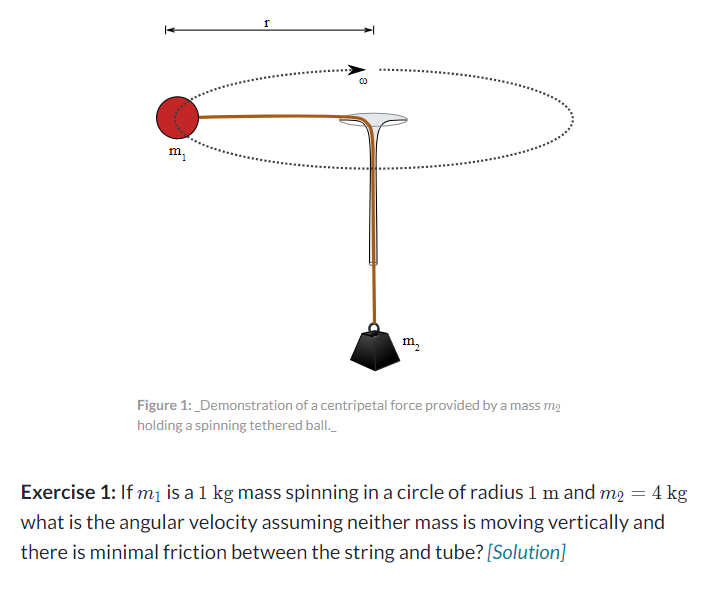 It’s not clear from the problem how $m_1$ is going around in a horizontal circle. One possibility is they drew the picture incorrectly. Another possibility is they are imagining a simpler problem, in which $m_1$ is actually sliding around in a circle on a frictionless table, with the rope going through a hole in the center of the table. They solved the task in a way that the force of gravity that acts on $m_2$ (counterweight) is equal to centripetal force ($F_g=F_{cp}$)

You are correct : the diagram is unrealistic. The entire problem leaves out a lot of important information. It is a very disappointing effort from such a well-known teaching site.

Mass $m_1$ does not appear to be moving on a frictionless horizontal table - although that would be a reasonable assumption. Gravity must be assumed to act on mass $m_2$ otherwise there could be no centripetal force. And the preceding paragraph refers to $m_2$ as a counterweight. Gravity must act on $m_1$ also. Without a table to rest on, mass $m_1$ would not rotate in a perfectly horizontal circle however fast it moved. The string would always be inclined downwards by some small angle (see Conical Pendulum). For this reason alone the centripetal force would indeed be less than the counter-weight.

The tube has a rounded opening or bell which, like a pulley, allows the string to change direction smoothly. The implication is that the tube is frictionless, and that the tension is the same in both sections of the string. If static friction were included the tension in the nearly-horizontal section of the string could be greater or less than that in the vertical section, because friction could act in either direction.

The bell opens out horizontally. Perhaps the person who devised the question intended that this would ensure that the string remained horizontal when it left contact with the bell, so that mass $m_1$ is guaranteed to travel in a horizontal circle. If so, this is a naive assumption which is incorrect. The string will change direction abruptly at the rim where it is no longer supported by the bell.

Lastly, it is not stated that $m_2$ hangs freely, but that seems to be implied. Like $m_1$, counterweight $m_2$ could also be resting on an invisible horizontal surface, so that part of its weight is balanced by the normal contact force.

The length of the string is fixed, and the problem states that $m_1$ moves in a circle, therefore $m_2$ does not move vertically. It is held in equilibrium by the upward tension in the string and the downward force of gravity. It is not necessary to assume that $m_2$ rests on a horizontal surface. The fact that $m_2$ is not moving vertically (ie that it is not falling) does not mean that it is resting on a horizontal surface which stops it from falling.

Not the answer you're looking for? Browse other questions tagged homework-and-exercises newtonian-mechanics rotational-dynamics centripetal-force or ask your own question.

0
Shape of the orbit in tethered ball?