Why put a radio telescope in space instead on the Moon?

Currently, only Spektr-R is operating; the other two have long ceased operations. Zond-3 was sent into interplanetary space, and contact was eventually lost; the other two were sent into Earth orbit, a necessity for simultaneous use with terrestrial radio telescopes.

Martin Beckett and JEB have already talked about one advantage of a telescope in space, namely, that Very-Long-Baseline Interferometry (VLBI) can be performed. VLBI involves placing multiple telescopes far apart; the larger the separation, or baseline, the greater the resolution. You don't have to build one giant telescope to get greater resolution; you can just put dishes really far apart. This is what HALCA and Spektr-R were intended to be used for - they could achieve baselines hundreds of thousands of kilometers long when used in conjunction with telescopes on Earth.

The thing about interferometry is that the collecting area of two small telescopes with baseline $X$ isn't the same as the collecting area of one large telescope with diameter $X$ - it's substantially less. Therefore, having a space-based interferometer doesn't drastically increase collection area, unless the telescope itself is huge. Additionally, the dish size is limited by technical constraints from the rocket launching the telescope, which is why the space-based dishes are so small compared with some of the radio telescopes used for VLBI on Earth. This was done 20 years ago, when HALCA was used with the Very Large Array and Very Large Baseline Array.

I could imagine something like the James Webb's primary and secondary mirror setup, which involves panels unfolding while in space, to get around the size limit. That could be possible for a space-based telescope, but I doubt you could increase the size significantly - you certainly won't get anything greater than a few dozen meters in diameter, barring significant advances.

Another advantage of having a telescope in orbit or on another celestial body is that the area might be radio-quiet - that is, there would be no distracting signals from man-made sources (radio frequency interference, or RFI). That's a big reason why the far side of the Moon has been under consideration for a radio telescope. On Earth, radio astronomers either have to work in radio-quiet zones (e.g. the Green Bank Telescope in the United States National Radio Quiet Zone), or accept and try to remove radio noise, which is a pain in the neck - you can lose information when you take out certain frequency bands (I can confirm from experience that zapping out noise is annoying!). Even things like cell phones can pollute a signal. Putting a telescope on the far side of the Moon or in space would likely remove this sort of problem.

Then again, a lunar radio telescope would have one major problem: communication with Earth. The whole point of putting it on the Moon would be to block it from radio signals. That would require going through a satellite in lunar orbit acting as a sort of middleman to transmit data to Earth. Telescopes based in space wouldn't have that problem, but they'd have to deal with contamination from signals from Earth - including signals they'd themselves be sending, to transmit data. On the plus side, RFI from Earth would only be a problem in a small region of the sky, and would get weaker farther from Earth.

A middleman satellite in lunar orbit adds a layer of complexity - which means another possible point of failure. Plus, if you want to operate the telescope from Earth manually, you need the satellite to be in just the right position, allowing transmission from Earth and the telescope simultaneously. Granted, of course, it's far more likely that the telescope would run automatically, via pre-written observing scripts, but telescopes often have a human operator on-site to take manual control if needed; you can't easily do that here. And anyway, being beholden to that satellite might make people uneasy.

The radio window that JEB mentioned doesn't extend to frequencies in the millimeter and submillimeter wavelengths. Telescopes observing at those bands, like ALMA, have to use specific windows to avoid absorption from the atmosphere. One way to get around this is to launch a telescope into space to operate at these wavelengths. SWAS is an example, operating since 1998.

I would expect that you could build a space-based dish capable of operating at the millimeter range and at longer wavelengths, able to perform millimeter observations and observations at lower radio frequencies. I don't know how much the size limitations would restrict its operating range, but it's a possibility. SWAS, for example, works at frequencies an order of magnitude or two higher than many radio telescopes. In other words, the main benefit of this space-based telescope (as opposed to a telescope on Earth) would be for millimeter and submillimeter astronomy, on the side.

A lunar radio telescope also wouldn't have problems with this absorption, of course. The Moon's atmosphere is incredibly tenuous, and there are no signification absorption bands (the atmosphere is largely composed of argon, helium, neon, sodium and potassium, all with extremely low number densities - too low to matter). The big advantage here is over Earth-based telescopes.

Construction, transport and use

Say you want to build something like the Very Large Array. That involves 27 telescopes, each 25 meters in diameter - with a total collecting area of about 13,000 m2. If we're limited by rocket size to telescopes 15 meters in diameter, we need 75 telescopes to get the same collecting area. That requires a number of rocket launches - and that takes energy, time and money - and a way to land the thing on the Moon. I don't know what the cost would be, but it would take a massive effort.

Then, unless you can have the array installed remotely by robots - and I doubt you can - you need humans on the Moon, and not just one or two. A telescope array is a complicated object that needs to be carefully placed and calibrated, and getting humans on the Moon is yet another point of failure, another thing to worry about. And the only advantage over an array on Earth? Reduced RFI. It's not worth it.

It's debatable as to whether having 75 telescopes in orbit is worth it, either, but they would be a lot easier to get into position. Now, keeping them aligned would be a problem, compared to an interferometer on Earth or the Moon, but we're developing technology allowing for pinpoint accuracy - see eLISA, slated for launch in a decade or two.

@Kyle Kanos is correct, there is a "Radio Window":

Also: radio telescopes are huge. Arecibo's receiver platform is 900 tons, or 33 full Space Shuttle payloads. The cost would be ridiculous.

I'm not sure of the power requirement, but that is always a challenge for space based platforms. Ground bases antenna allow for radar astronomy (on the order of megawatts Tx), which is a unique thing in astronomy: the astronomer actively illuminates the target.

Nevertheless, there is one advantage to space based systems, and that is interferometric baseline. There is a mission to do just that, in conjunction with ground based telescopes:

Some advantages of space over the moon:

Radio telescopes need to be big - the latest on earth is 1 square km (total area) !

There is no reason to put them in space, (most of) the wavelengths pass through the Earth's atmosphere so there is no real advantage to being in space and it would be expensive.

The main advantage in space is you can have much longer baselines and so more resolution. There are a couple of space telescopes that link with Earth based telescopes to give baselines longer that you can fit on Earth.

The other answers are solid, but I'd like to focus on one important point.

Generalized question: "Why don't we do [activity X] at [space location Y]?"

Using non-fictional rocket engines, there are terribly few activities that make more sense to do in space than on the ground. Pretty much, if it's possible to do something on the ground, doing it in space is a lot more expensive.

And the same relationship holds true when comparing Low Earth Orbit to geosync/lunar/solar/etc orbits. If you can do something in LEO, doing it on the Moon is a lot more expensive.

This is a graph of gravitational potential energy for different orbits: 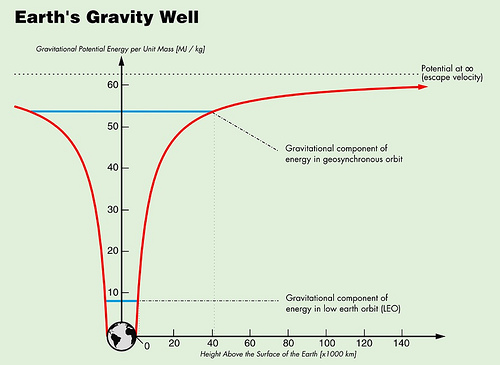 The Moon would be up above geosync, around the 60 mark but a way off to the right.

"Space is big. Really big. You just won't believe how vastly, hugely, mind-bogglingly big it is. I mean, you may think it's a long way down the road to the chemist, but that's just peanuts to space." - Douglas Adams

In addition to the other answers - landing on the moon is risky.

You are intentionally launching something relatively delicate, unmanned (enforcing at least a 2s delay), with a desire on it's orientation; at a large solid object which will accelerate your delicate object towards it.

If it goes wrong - it would not be unreasonable to expect to lose everything.

Further to this, you can not direct the sensor to anywhere you want it to in good time. You have a massive chunk of rock one side of you, blocking out at least 50% of your field of view. A satellite in orbit has the Earth, blocking a modest chunk of it's view - sure, but the rate at which that is moving is much more significant, meaning any blocking done will not remain for long.

That said, the first point does also highlight the significant advantage of planting the object on the moon. Space junk. By sending it into the moon, if anything goes wrong, the moon will clean up any debris, allowing you to launch any number of times as you require with no risk of hitting previous attempts (except on landing - but I don't see how this risk vs the risk of hitting a random rock is different).

Not the answer you're looking for? Browse other questions tagged astronomy telescopes radio-frequency space-mission or ask your own question.

11
Why is this radio telescope's reflector spherical and not parabolic?
8
Exoplanet detection via space-based parasol
8
Could many widely separated space telescopes be combined for VLBI on IR/visible wavelengths?
1
Any projects to build a telescope in space?
12
What prevents digital interferometry in an optical telescope array?
0
Is it possible to have a strong antenna receiver pick up signal in great distance from a weak transmitter?
3
Antenna Array Radio Telescope
6
How did Jocelyn Bell aim her radio telescope (phased array)?