On the following Higgs $\rightarrow$ Tau Tau plot, since we are plotting the ratio of $\frac{\sigma}{\sigma_{SM}}$ on the y axis, shouldn't the expected for this be 1? i.e., shouldn't the expected 68% and 95% be centered at a dotted line at 1? Anything else seems to imply we are expecting something other than the Standard Model... 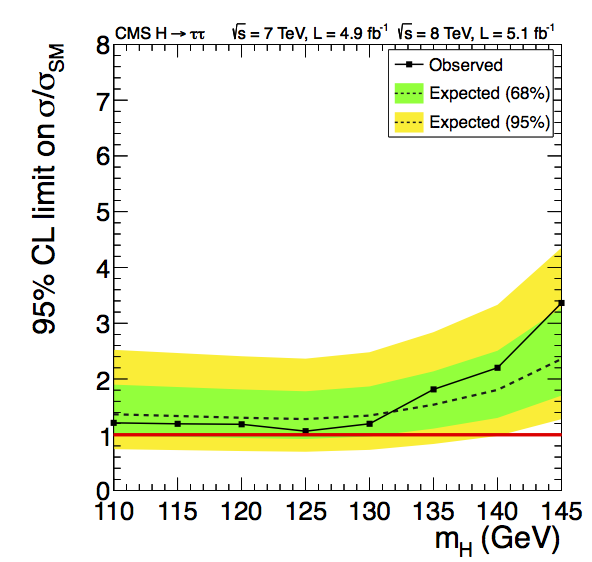 Let me explain what is done.

You have computers that may "simulate" the LHC according to the laws of the Standard Model without the Higgs boson included. Well, this assumption is mostly true. You run the "simulation" many times and you get a certain number of events of a given type, for example the $\tau^+\tau^-$ final states discussed in this chart. None of these events is really caused by the new particle – in this case the Higgs – because the simulation assumes that there is no new particle (and Higgs is considered new at this stage).

From this number of collisions with a specified outcome, you determine what the cross section $\sigma$ for the Higgs production is. It's only positive if there is a statistical upward fluke in the number of these final states – over the known non-Higgs, old physics events that are known as the "background". You get this cross section for the Higgs production with some error margin etc., more precisely with some distribution.

From running many simulations of this kind, virtual LHC runs, you may determine the whole distribution of "expected upper bounds". The average or median value is drawn on the graph as the dashed black curve and the green and yellow "Brazil" (named after the flag) bands around it indicate the 1-sigma and 2-sigma intervals. So for every value of $m_H$, you may read the intervals: 68% of the simulation runs were able to deduce that the Higgs cross section is smaller, at 95% certainty, than a point in the green band; 95% of the simulation runs were able to determine that the Higgs cross section must be, at 95% certainty, smaller than a point on the $y$-axis in the green or yellow band.

Now, you run the real experiment, the LHC. If the LHC works according to the Standard Model - in this case, we mean the Standard Model without the Higgs contributions because we consider the Higgs boson to be "new physics", not yet a part of the "null hypothesis" – then the real LHC run will behave exactly as one of the random simulation runs. So the chance should be 68% that the upper bound you will be able to impose from the real-world LHC collisions belongs to the green band, and 95% that it belongs either to the green or yellow bands.

In reality, the full black line near 145 GeV, you see that we got about 3 times the Standard Model. That means that there was an excess of these events so we could only say, based on the real LHC collisions, that the cross section isn't greater then 3 times the Standard Model (with the 145 Higgs). So this is milder, less informative inequality than expected. Either way, essentially because the signal-to-noise ratio is poor over there (the noise is the "background" while the signal is the hypothetical "Higgs contribution") it's not enough to decide whether there is a 145 GeV Higgs or not. The non-Higgs "null hypothesis" without a 145 GeV Higgs implies that the Higgs cross section should be 0. The 145 GeV Higgs non-null hypothesis predicts that the Higgs cross section should be $1\sigma_{SM}$, at the red line. But the data are inconclusive, they only say that the right number is below 2 (expected) or 3 (observed) which means it may be both 0 or 1.

On the other hand, the expected and observed upper bounds may get closer to the red line or below it. It means that for those parameters (and/or for those colliders, channels, and/or datasets), the LHC experiment in this particular channel becomes sensitive (the signal-to-noise ratio becomes good enough) and able to decide whether the null hypothesis is viable or whether new physics has to be added. In particular, when the full black observed line gets beneath the red line, it may exclude the non-null hypothesis that the new particle – the Higgs bosons of a given mass, in this case, exists.

You see that it hasn't happened in your chart: the full black line is never beneath the red line level. Paradoxically enough, they get very close for the 125 GeV Higgs mass, so for this value of the mass, this experiment looking at the $\tau\tau$ channel is able to exclude the 125 GeV Higgs (the Higgs boson we know to exist from other channels!) at nearly 95% level, it could be over 90%. Unless this is a sign of some new physics (the 126 Higgs doesn't interact with the taus as much as expected by the Standard Model), and the evidence for this new physics is so far very weak, the "near exclusion" near 125 GeV is just due to a downward statistical fluctuation in the particular collisions that were used, and it will go away when more collisions are collected.

In addition to referring you to the previous question and answer that David linked, I will try once more to postulate my interpretation of these graphs, called "Brazil bands".

In my opinion they are the phenomenologist's attempt to extract limits out of very few events. Once there are enough events this type of plots and their yoga positions ( catching your right ear behind your back with the left hand) are abandoned, as the Higgs mass plot of CMS shows . 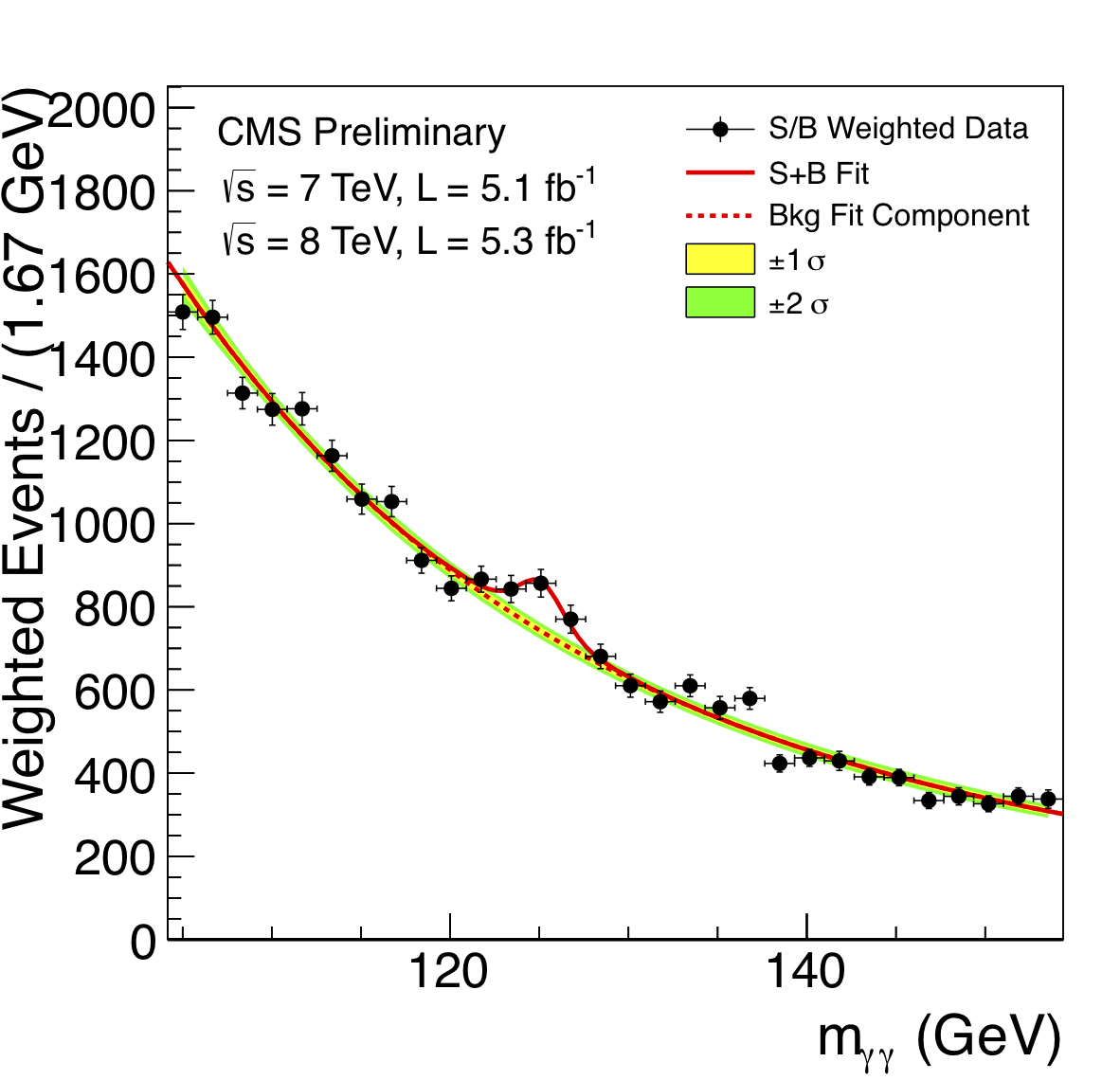 The use of these Brazil plots is to concentrate the attention to regions which are not excluded even by scarce data, and thus give a hope of finding a desired higgs there. Now that we have it they are useless.

The confusion arises because there are two Monte Carlo simulations entering the "expected" plot. The reason is that one is necessary to get the theoretical value , since it cannot be found analytically, to large enough accuracy so that statistical errors would be irrelevant.

The expected curves are curves that in the numerator immitate the data, i.e. if the data has 10 events a monte carlo is generated with 10 events and passed through all the limitations of the experimental setup, and the denominator the pure theory monte carlo. This ratio is distorted : The fewer statistics as the mass increases in collusion with the detector limitations and errors from the ideal Higgs mass at each point create the distorted from 1 ratio seen in your plot.

When one has adequate statistics, the one and only Higgs would appear as 1 in the observed ratio and all the rest of the x axis would be depressed bellow 1, since the computed crossection would be much larger for the putative higgs mass over what the data has at that value , since the Higgs is at 125 GeV and only then will the ratio be 1. The expected over observed would be at 1 all the way through, as you observed.

As I said when one has enough statistics this type of plots are useless.

Not the answer you're looking for? Browse other questions tagged particle-physics experimental-physics higgs or ask your own question.