Why does compressible flow never choke in a thin-plate orifice?

According to this Wikipedia article on orifice plates:

Further to this, there is a reference given, which states the following:

Cunningham (1951) first drew attention to the fact that choked flow will not occur across a standard, thin, square-edged orifice.[10] The mass flow rate through the orifice continues to increase as the downstream pressure is lowered to a perfect vacuum, though the mass flow rate increases slowly as the downstream pressure is reduced below the critical pressure.

Is this true? If so, how/why is this the case? Surely an orifice provides a minimum flow area, which should impose a limit on the mass flow rate, beyond a certain critical pressure drop?

If anyone thinks that the Wikipedia article or the reference are incorrect, then I would be very interested in a reliable reference that contradicts it.

There are practical considerations involved in sizing an orifice plate and the associated piping. For the piping that is carrying flow to the orifice plate, you want a maximum gas or vapor velocity of approximately 200-300 ft/s, and a maximum liquid velocity of approximately 10 ft/s, because higher velocities lead to too much pressure drop per foot of pipe, meaning that too much energy is lost due to friction effects. For the associated orifice plate, you want a reasonable estimate of the flow rate through the pipe, but you also want to somewhat minimize the pressure drop across the orifice plate, because this also represents lost energy. This means that the hole diameter of the orifice plate is "substantial" when compared to the diameter of the piping that contains it. Thus, to answer the question, there is never choked flow through an orifice plate because the orifice plate and associated piping system are deliberately designed to avoid those flow conditions.

I've been thinking about this, and I'm going to have a go at answering it myself. 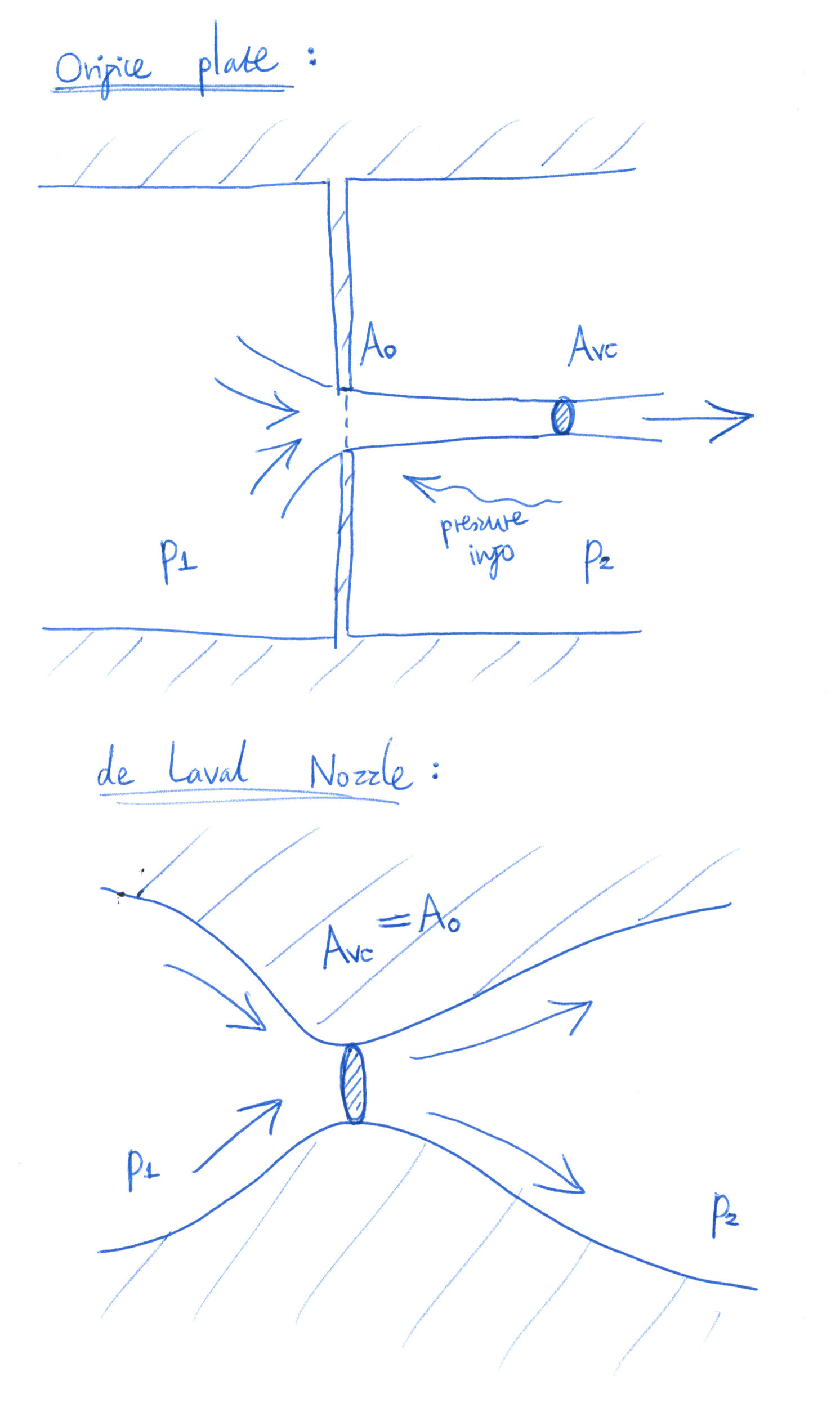 Because of the separation that occurs in the orifice, and the fact that the jet streamlines are never going to be perfectly horizontal, it seems reasonable to conclude that the vena contracta for the orifice plate must occur somewhere downstream of the orifice. Therefore, the vena contracta is 'floating in space' and is not constrained by any solid boundary.

Therefore, even after sonic velocity is reached in the vena contracta, if the downstream pressure ($p_2$) continues to decrease, then the streamlines of the jet will become more horizontal and the vena contracta will increase, hence the flow rate will continue to increase.

This is enabled by the fact that, because the vena contracta is 'floating' in the flow, sonic flow is not 'blocking' the flow passage, which means that (unlike with the nozzle), pressure waves can travel upstream to and past the orifice, so reducing the downstream pressure can continue to affect the flow through the orifice.

For the orifice plate, the vena contracta area ($A_{vc}$) will never reach the same size as the orifice ($A_o$), because of the flow separation from the edge of the orifice. So, in a way, it could be said to be 'less efficient' than the nozzle, in terms of passing flow.

In the case of the de Laval nozzle, because it is designed to prevent separation of the flow, the vena contracta is constrained to always be at the point of minimum flow passage area. Because of this, it can't increase, so once sonic velocity is reached there, it is not possible to increase the mass flow rate any further. Also, because the sonic vena contracta completely blocks the flow passage, pressure waves are prevented from travelling upstream past it, so reducing the downstream pressure cannot have any effect on the flow conditions upstream of the v.c.

2
Flow Rate and Orifice Diameter
5
Must flow be supersonic for disturbances not to affect upstream?
1
2D aerofoil fluid analysis - find velocity ratio
3
How can I justify the formula for orifice flow rate?
1
Pressure near a submerged orifice?
1
How does one calculate the expected leak rate through a hole, and the pressure drop due to that leak?