A DC voltage source supplies electrons that move in a single direction, producing a current $I$ distributed through the conductor's cross-section.

As per Ohm's law, a change in voltage changes the force on the electrons, causing an increase in the speed (and hence the current) of the electrons.

Electrons under the influence of a DC voltage don't move in a straight path, as they are attracted by the positive charge of atomic nuclei in their path.

When we apply a sinusoidal AC voltage to a conductor, electrons alternately accelerate, slow, stop, and reverse direction.

When we apply high frequencies, like $300$ MHz, I assume that the alternation of voltage direction is so fast that electrons don't move, they only hesitate in one place. But if this is true, that electrons are standing still, then how do antennas oscillate current to create $EM$ waves?

What is the reason for the energy difference between the higher and lower frequency waves?

If I generate a $300$ MHz $EM$ wave through an antenna with a $1$ V voltage source, will that EM wave have higher energy than a much lower frequency wave produced by the same antenna but with a $200$ V amplitude? If so, why? 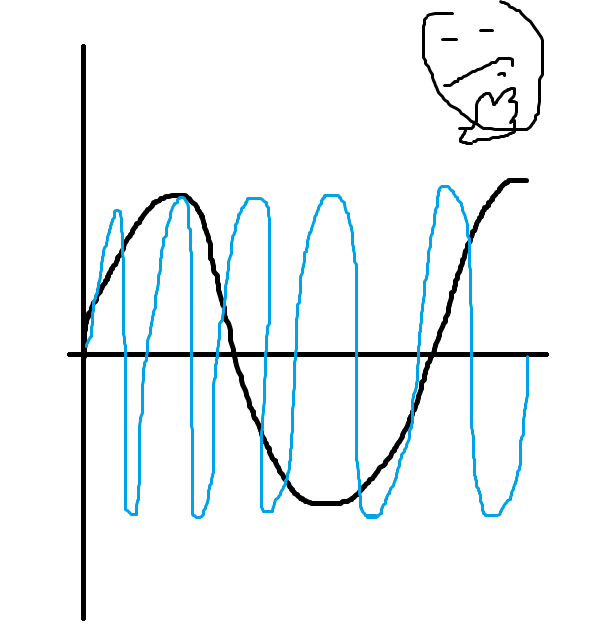 So the motion of the electrons is not what limits our ability to transmit high frequency signals over wires.

There are two more important limits on transmitting high frequency signals over wires:

The power of a radio transmission depends on how many photons per second are radiated. We could work it out: for example say we have 1 kW transmitter at 300 MHz, and we assume the antenna, feedline, and other practicalities are 100% efficient. 1 kW is 1000 watts, and 1 watt is 1 joule per second. So the sum of all the energy of the radiated photons in one second must add up to 1000 joules.

At this frequency the photon energy is:

The transmitter power multiplied by the reciprocal of the photon energy gives photons per second:

A higher transmitter frequency would mean more energy per photon, so assuming transmitter power is held constant, there must be fewer photons per second radiated.

But how, then the antennas oscillate an em waves, if electrons almost standing?

1
Do a receiving antenna interfers with an emitting antenna?
2
Is it possible to synthesize an EMW which is not quantized?
3
How far do electrons go in an antenna?
3
How do antennas generate photons?
4
Antenna Radiation
0
Do the concentration of electrons in a circuit affect the magnetic field?
1
What change in an EM field is required to create an EM wave?