How does tilting a bike make it turn sharper?

Note that my question is not why do you tilt your bike when on a curve. It's about the reduction in turning radius when one tilts the bike inwards. 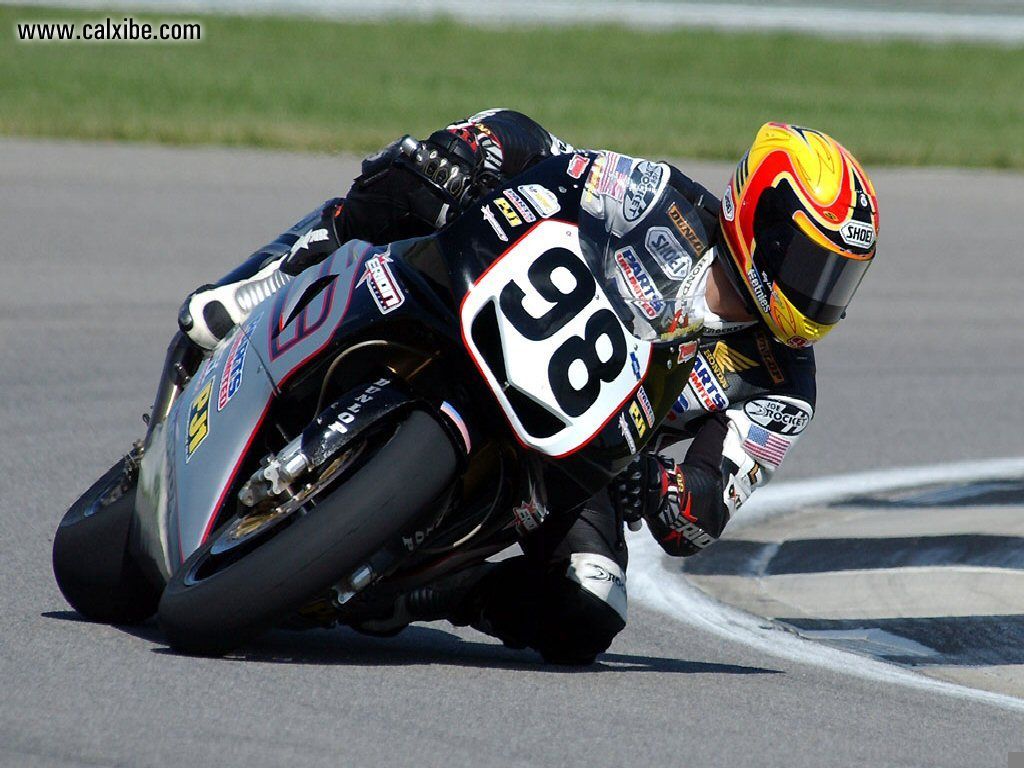 It is actually not the tilting that causes more turning. You could in theory turn just as much while being straight up by just turning your steering wheel.

But if you do that straight up, you fall. The torque produced by the friction from the turned wheel is unbalanced and will flip you over. When you turn on a bike, your body automatically leans in and tilts slightly - not because that tilting does the turning, but because it keeps your balance.

By tilting your bike, you move your centre-of-mass sideways, so that gravity causes a larger and larger torque in you. When this gravity-torque counteracts the friction torque exactly, your turn is stable and you won't fall while turning.

Notice that when the biker tilts more, the torque due to gravity increases(taking pivot to be any point other than point of contact or center of mass as then centrifugal forces would be needed to balance torques in an accelerated frame). Also notice that it is friction that is the counter/opposing torque to the torque by gravity. Hence as the biker tilts more, the frictional force must increase. And as frictional force is the centripetal force: $$F=\frac{mv^2}{r}$$ $$r=\frac{mv^2}{F}$$ So as $F$ increases, the radius of the turn must decrease. We can derive further with the reaction force having components $Rsin(\theta)$ equal to gravity so $$Rsin(\theta)=mg$$while the frictional component is $$Rcos(\theta)= \frac{mv^2}{r}$$. From these we can derive directly the relationship between the angle of tilt and the radius of the turn for a constant speed. It follows that $$\frac{Rsin(\theta)}{Rcos(\theta)}= tan(\theta)= \frac{gr}{v^2}$$ Thus it is again clear to see that the radius,$r$ is proportional to $\theta$ which is angle with the horizontal so the lower the angle, the more the tilt and hence lower the radius. 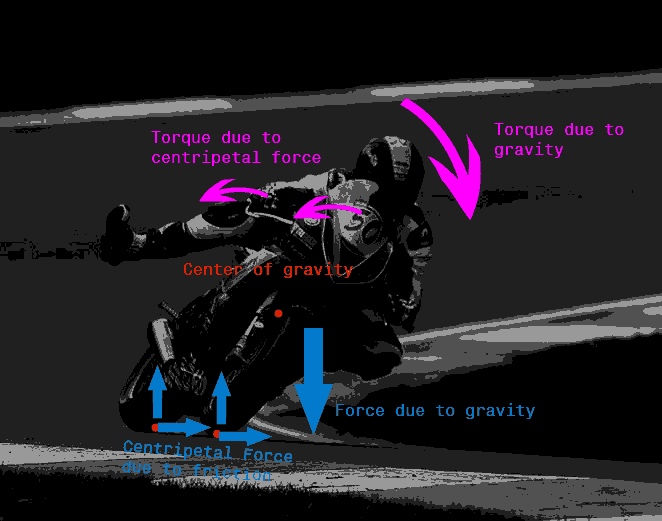 Note: Of-course the causality does not go on that bending more means shorter turns but rather, for stability as has been assumed in this derivation, bending more leads to shorter turns as quoted in previous answers or smaller $r$.

This is called countersteering. see an in-depth physics explanation here.

As you turn, the top part of the bike wants to go keep going straight (because of inertia), whereas the wheels are bound to the ground by friction. This is experienced by the bike as a torque trying to flip the the bike in the direction opposite to the turn (i.e. if you turn left there's a counterclockwise torque).

It's basically something very similar to the imaginary "centrifugal" force one experiences while spinning a bucket of water.

An effective way to counteract this torque is to push down the bike on the opposite side. This will put it off-balance and, if the bike was not turning, it would fall down. If you think about it, gravity acts as a torque in the opposite direction as the centrifugal torque above. Gravity is a force, but since the wheels are bound by friction it acts as a torque with respect to the center of mass.

An experienced driver will twist the bike just enough so the two torques cancel out. In this manner, all the centripetal force is focused pushing the wheels down on the asphalt -- this is great for racing because

Note that unlike what the top answer says, it is indeed this tilting that makes the bike turn. In fact, due to the geometry of wheels, bikers have to unintuitively turn the wheels left to turn right (countersteer) while applying this technique -- otherwise the bike does not go down as it should.

See a biker demonstrating this quite clearly on this YouTube video 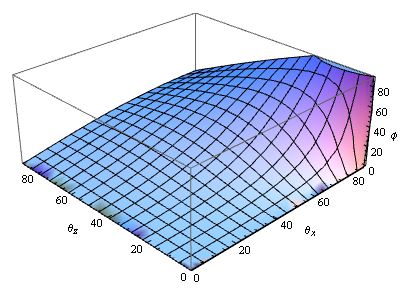 Figure 1. Here we assume a rake of 25 degrees. $\theta_x$ is the tilting angle and $\theta_z$ the turning angle with respect to the handlebars. $\phi = \theta'-\theta$, where $\theta$ and $\theta'$ are the angles the tire makes with respect to the forward direction before and after tilting the bike. (Note that due to the rake of the bike, $\theta_z\ne\theta$.) 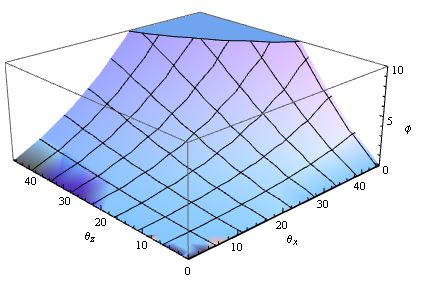 Figure 2. One can see that for small turning angle that tilting the bike has little effect, agreeing with our intuition, but that for any turning angle the effect grows with tilting angle and can become a large effect. 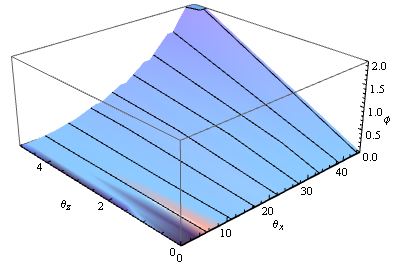 Figure 3. For a turning angle of two degrees the effect of tilting 45 degrees is appreciable.

Figure 4. Here we assume a rake of 25 degrees and let the turning angle be ten degrees. The tilting angle varies from zero to 45 degrees.

Figure 5. A top view of the situation depicted in Figure 4.

I am sure the answer lies in the point of contact of the wheels with the ground.

I think you are right. You don't need torque or centripetal forces or gyroscopic forces to understand this. Two wheels also complicates this unnecessarily. The answer lies in geometry.

If you take a (e.g. lego) wheel and stick an axle through it and balance it, it will roll forward in a reasonably straight line on a flat, level surface. Now move the axle to one side so that it is leaning slightly. Push it forward and it will turn the in the direction of the lean.

Another way to think about it is like a cylinder and a cone. A cylinder rolls straight, a cone rolls in a circle. You might think that has something to do with the point of the cone but you can slice off the top of the cone and it still works. If you shortening the cone until it is just a sliver (balanced such that it's base is at the same angle,) it will continue to roll in the same manner. This situation is a reasonable approximation to the geometry of a tire that is leaning.

Another way of seeing this that you would fall faster when the bike is tilted more. So you are more in a hurry to move the contact point with the road below your center of gravity.

The key point I'm making in my answer is that the linear component of this is the same regardless if the bike is falling or not. Centripetal acceleration is equal to the centripetal force exerted by the pavement on to the contact patches of the tires divided by the mass of bike and rider (force = mass x acceleration, so acceleration = force / mass), regardless if the bike is leaned properly or not (falling inwards or outwards).

The purpose of leaning properly is to keep the bike from falling inwards or outwards during a turn.

In a coordinated turn, the bike needs to lean inwards enough so that the outwards torque related to inwards centripetal force at the tire contact patches and the outwards reaction force at the center of mass is exactly countered by the inwards torque related to gravity pulling down at the center of mass and the pavement pushing up at the contact patches.

In an uncoordinated turn, such as dodging around a pot hole, a bike can be quickly turned to get the tires out from under the bike to go around the pothole, but the bike ends up leaning the "wrong" way, and this lean has to be corrected for after passing by the pothole.

In case the OP is asking how lean angle effects steering inputs, I'm adding this geometrical explanation in this part of my answer.

In a steady turn, the path of a bike is a circle, and the radius is from the path of bike to the center of the circle. Ignoring factors such as tire deformation or slippage, the radius is a function of steering angle and lean angle.

In the imaginary case where a bike was vertical and not leaned, the center of the circle would be where the imaginary extension of the front and rear axles intercept. In the case where a bike is leaned over, the intercept point is below the pavement, and the center of the circle would be a point on the pavement directly above the intercept point below the pavement, and the circle and radius would be smaller. I'm thinking that the effect of lean angle probably multiplies what would be the "vertical" radius by the cosine of the lean angle. So if leaned at 45 degrees, the radius is cos(45) ~= 70.7% of the "vertical" lean angle radius.

Note that this doesn't have anything to do with balancing of the bike, it's just the geometrical combined effect of steer and lean angles.

With the bike upright and either no turn or a very slight one the most outer circumference is in contact with the roadway.

When you lean in a sharp turn the inward torque will balance the outward torque created by the centripetal force (preventing tipping over) and the bike moves off the outer circumference and contacts higher up with a leading vector advancing towards the direction of the turn. The portion of the front wheel's rubber after the former lowest point is no longer in contact.

With the rear wheel, which is much fatter and doesn't turn, it's simply the side that pushes and it plays no role in the turning.

Not the answer you're looking for? Browse other questions tagged newtonian-mechanics forces everyday-life free-body-diagram centrifugal-force or ask your own question.

0
Cyclist leaning when rounding a bend
20
Does leaning (banking) help cause turning on a bicycle?