Can ultrasonic waves become audible after "hitting" some object?

I recently found this article published in an Asian magazine, which claims the possibility of turning ultrasonic waves into audible sounds after "hitting" an object.

A Japanese enterprise specialized on highways and roads is supposed to commercialize an ultrasound system to warn drivers and to avoid crashes.

"Speakers about 130 centimeters high and 60 cm wide will be installed at intervals along expressways. They issue ultrasonic waves, which cannot be heard by humans due to high frequencies, toward the expressways.

When the ultrasonic waves hit windows and bodies of moving cars, the shapes of the waves change, enabling drivers to hear the sounds inside their vehicles." 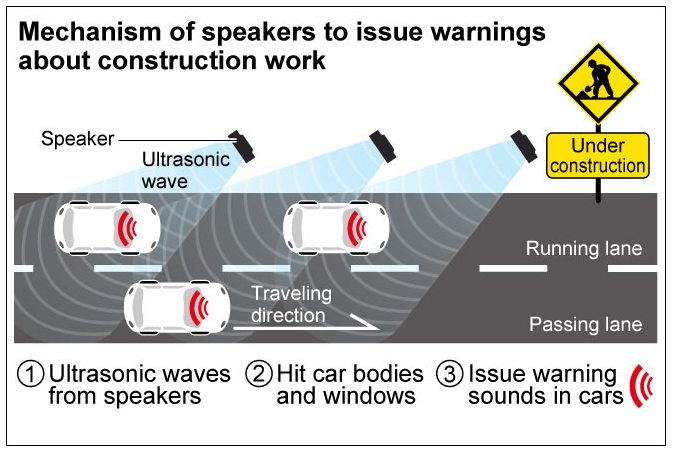 I have no idea how can this be possible. Ultrasonic waves can become audible after "hitting" some object?

Another possibility is that the ultrasound is used as a carrier modulated by an audible frequency. In this case, non-linearities in the windows or other parts of a car would cause demodulation and the resulting low frequency component would be audible.

Here is a related article about a potential use of AM modulated ultrasound as an alternative to hearing aid. Among other things, it states that such signal won't be perceivable by humans if transmitted through air.

Not the answer you're looking for? Browse other questions tagged waves acoustics frequency diffraction wavelength or ask your own question.

14
Is it possible to create an audible sound source in mid air by intersecting ultrasonic sound beams?
3
Can ultrasonic signal be guided through a tube?
5
Can sound travel in the form of transverse waves?
0
Negative (absolute) acoustic pressure in ultrasonic waves?
0
Ultrasonic waves through moving fluid
0
Why do waves disappear after some time?