What actually is the EMF in a current carrying wire?

My basic idea of what a DC current is that, when a potential difference is applied to the ends of wire it creates a force which propagates through the wire all the way to the other end. It propagates in this way - Since the only mobile charges are electrons therefore positive part of the battery applies an EMF which pulls the nearby electrons from the wire connected to positive terminal and which subsequently leaves the blank positively charged site which is then filled by the nearby atom and so on. This happens throughout the wire, and at the end, near the negative terminal fresh electrons are supplied constantly. So in a current, blank positive sites are constantly created which then pulls the nearby electrons.

Now, my query is that - Is it necessary that the blank positive site created has the EMF equal to that of the battery at the end ? If so, why ? Will it not depend upon the amount of blank positive sites created at one point (in other words "concentration") which will eventually pull the electrons with more force ? What if the wire is very thin ? 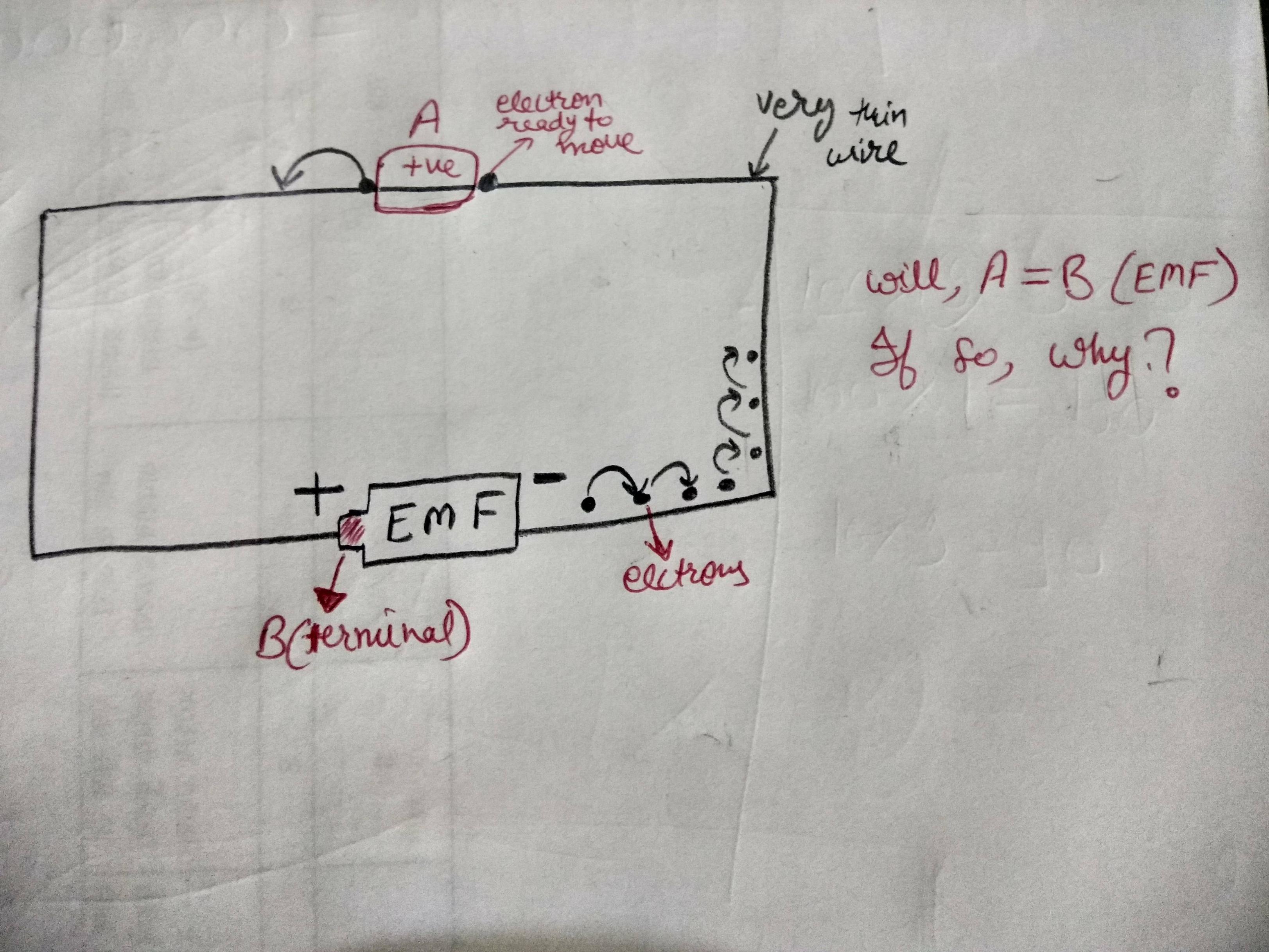 Is it necessary that the blank positive site created has the EMF equal to that of the battery at the end ?

We simply can't talk about "the EMF of point A". We have to talk about "The EMF between point A and point B (along path S)", or "The EMF around a loop from A back to itself".

We can however talk about the potential at certain point (with reference to some previously chosen reference point). So let me rephrase your question,

Is it necessary that the blank positive site created has the EMF potential equal to that of the battery at the end ?

This depends on whether you want to consider the wire as ideal (0 resistance) or real (non-zero resistance).

If the wire is ideal, then (in the lumped circuit approximation) it has the same potential at all points.

In this case, however, you seem to be modelling just a wire connected between two terminals of a battery. For this circuit, the ideal wire model is not sufficient, since it implies the same potential at the two terminals of the battery.

So you need to treat the wire as a distributed resistor. The potential will vary along the path of the wire from the value at one terminal of the battery to the potential at the other terminal. If the wire has a uniform properties and cross-section, then the variation will be linear.

If you want to consider effects outside the lumped circuit approximation, you need to consider the actual path of the wire through space, and the magnetic flux through the surface surrounded by the wire. In this case the electrostatic approximation is invalid, and you can't talk about "the potential at point B". But you can talk about the EMF along the path of the wire from point B back to itself.

1
What would happen if you attached a wire to an electrically charged sphere?
5
Why doesn't current flow when the wire is open?
1
Some questions related to circuits and flow of electrons
3
How the current moves in the battery and outside the battery?
0
Impact of +ive terminal of the battery on the wire (Conductor)
3
What is “electric field causes current in a conductor (metal wire)” exactly?
7
Does an electric current flow in an open circuit?
1
Does the electron in wire too move because of voltage difference?