How presence of metastable state ensure that there is first order phase transition?

Recently, I took a lecture in which professor showed a graph which was similar to following figure 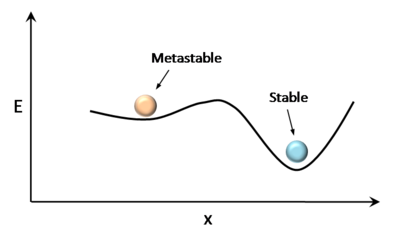 Professor told that if there is a metastable state, it means that there must be some kind of first order phase transition. I questioned him, how? And he replied that according to "X" theory in statistical mechanics, if there is a metastable state then there will be a first order phase transition for sure. Unfortunately, I couldn't remember the name of theory.

It does makes sense that if there is a metastable state then system will have to go toward completely stable state BUT I want to read more about that "X" theory. Is there any theory which says that metastable state ensure first order phase transition?

I am sorry for stupid question.

It's not a stupid question. I'm surprised that no-one has answered it. I believe that your professor was referring to the Landau theory, which is a standard starting point for the discussion of phase transitions. In your plot, the vertical axis represents the "free energy" of the system (not the energy) as a function of some order parameter (such as the magnetization).

The idea is that, as one changes some parameter, such as the temperature, the form of this curve will change, but in the region of interest (near the phase transition) it will have two local minima, as you illustrate: one (on the left, in your diagram) higher than the other (on the right). However as the temperature changes, the free energy of the minimum on the right will become higher than that on the left, so the identity of the stable minimum will change, and the system will convert into the newly-stable state. Exactly at the transition temperature $T_c$ the minima will have the same free energy, with a barrier between them. The result is that the order parameter of the system will change discontinuously, as the temperature passes through $T_c$, and this is the characteristic feature of a first-order phase transition. There is a useful picture and a discussion at 1st order phase transition, superheating/supercooling, metastable state

Edit: Landau theory is more famously applied to explain continuous phase transitions, and the Wikipedia page concentrates exclusively on this aspect. But when the appropriate terms in the order parameter (e.g. cubic terms) are added to the free energy, a first-order transition can be described.

Not the answer you're looking for? Browse other questions tagged quantum-mechanics thermodynamics statistical-mechanics phase-transition or ask your own question.