a flow through a pipe submeged in a moving fluid

There is a classic problem by which a fluid having a uniform velocity profile enters a tube. The pressure at the outlet is atmospheric, and the dimensions of that tube (diameter and length) are known. Pressure and velocity fields can be quite easily be calculated using a CFD tool. By reviewing the results it seems that there is a pressure difference between the inlet and outlet, which is very reasonable since there is a flow resistance to overcome.

However, how the pressure in the inlet is generated? If I wanted to allow this kind of flow, I would need to use a pump generating this pressure.

In the case the tube is just laid in a field of moving fluid - what would happen?

I must miss something...

One way to generate needed pressure difference will be to use some kind of pump as shown on the first picture:

You can also consider another setup: 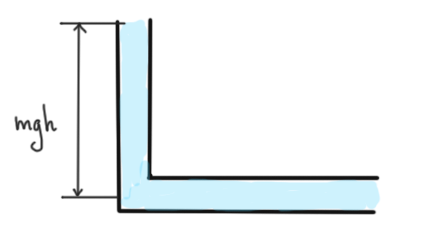 Finally you can of course place your pipe into stream of fluid. In this case you will just have to fix it so it doesn't move. In this case this pipe will be somewhat secondary in the sense that it will have nothing to do with generation of pressure difference. It may be produced in external liquid by any of aforementioned methods.

Flow produced the same way as in previous case enters pipe while having uniform velocity profile. We imply so called no-slip condition which states that speed of fluid layer near the pipe surface equals zero. Due to presence of viscosity($\approx$ friction between the molecules of fluid) aforementioned layer starts to slow down the one nearest to it and so on. This forces uniform velocity profile to change itself as shown in the picture: 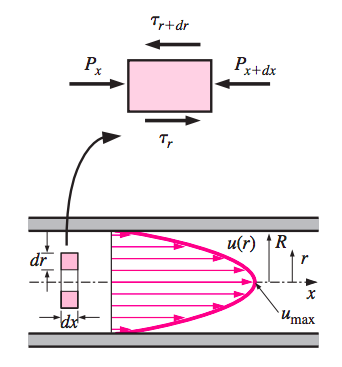 Since speed of every such volume is constant we state that sum of forces acting on it equals zero. From one hand there are $\tau_{r+dr}$ and $\tau_{r}$ - shear stresses due to interaction of the nearest layers of the fluid. Since $\tau$ has radial dependence there appears disbalance in forces acting on a given volume. This generates the same(up to sign) pressure difference in x direction.

PS: Aforementioned explanation is heavily based on the following article. See 8-3 and 8-4.

Not the answer you're looking for? Browse other questions tagged fluid-dynamics flow navier-stokes or ask your own question.

0
Determining fluid flow velocity from experimental volumetric flow rate data
0
Inlet with variable pressure profile
0
How to calculate the flow rate?
0
Velocity driven Poiseuille flow using the incompressible lattice Boltzmann method
0
Temperature Profile of Flowing Fluid within a Pipe and the Temperature Profile of the Pipe Itself
1
Why does the garden hose swing back and forth? Is my explanation right?