Point particle with a magnetic dipole?

Where John Rennie's answer says that electrons do have an electric dipole moment and we imagine that in math with a cloud of virtual particles.

Now that cloud has a shape and that is what he is referring to to be spherical.

Now the electron has a magnetic dipole moment too, and it is related to the spin.

How do you fit a dipole in an electron?

Now none of these talk about how the electron can have a dipole moment, when it is a point particle.

The word dipole comes from the words two poles. Magnets do have two poles, we can call them north and south, but there is no magnetic monopole.

The physical picture is that the effective magnetic moment of the electron results from the contributions of the "bare" electron, which is the Dirac particle, and the cloud of "virtual," short-lived electron–positron pairs and photons that surround this particle as a consequence of QED. The small effects of these quantum mechanical fluctuations can be theoretically computed using Feynman diagrams with loops.$^{[51]}$

[51] "Revised value of the eighth-order QED contribution to the anomalous magnetic moment of the electron" (Feb 20 2008), by T. Aoyama, M. Hayakawa, T. Kinoshita, and M. Nio:

See Page 6: "The amplitude of the magnetic moment contribution of a diagram is obtained by applying Feynman-Dyson rules of QED in the momentum space." and appendix B on page 38.

where $I$ is the current and $A$ the area it encloses. An electron that makes $\mathcal f$ rev/s in a circular orbit of radius $r$ is equivalent to a current of $- e \mathcal f$ (since the electronic charge is $-e$), and its magnetic moment is therefore 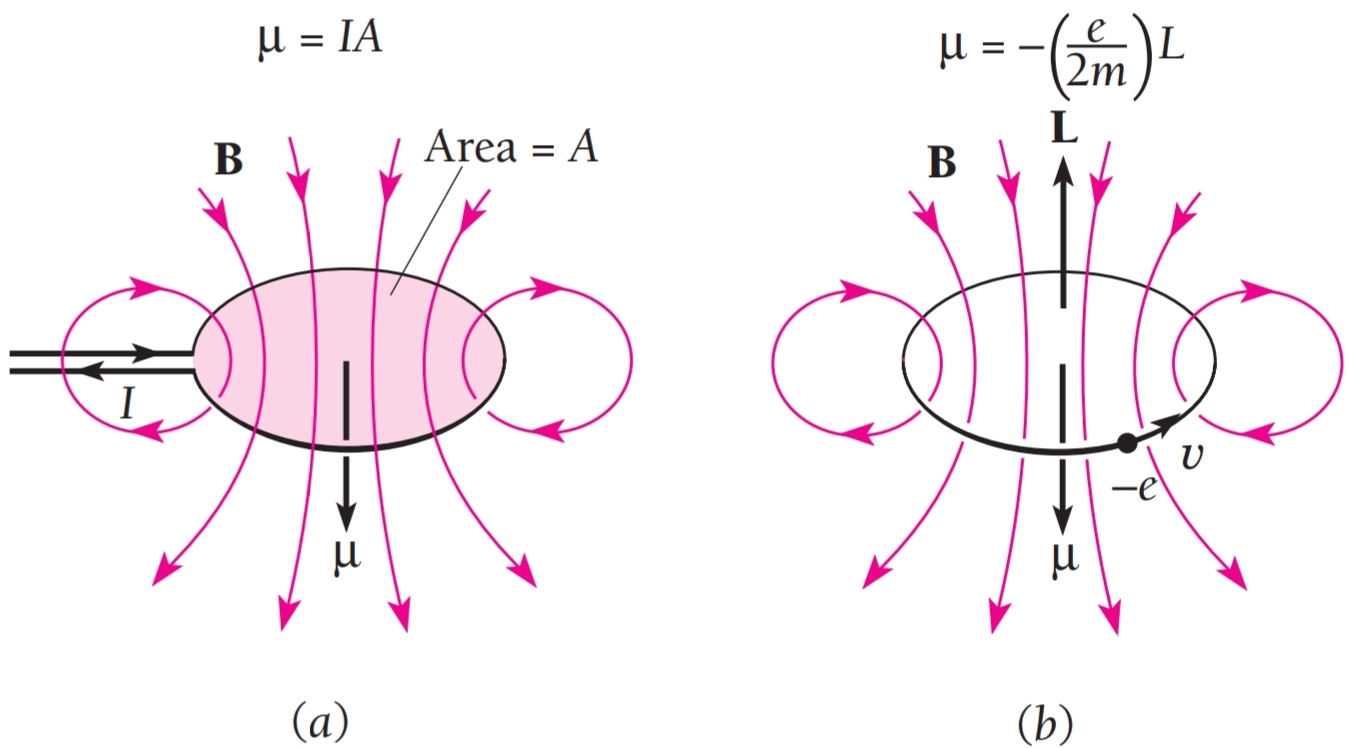 for an orbital electron (Fig. 6.16). The quantity ($-e/2m$), which involves only the charge and mass of the electron, is called its gyromagnetic ratio. The minus sign means that $\mu$ is in the opposite direction to $L$ and is a consequence of the negative charge of the electron. While the above expression for the magnetic moment of an orbital electron has been obtained by a classical calculation, quantum mechanics yields the same result. The magnetic potential energy of an atom in a magnetic field is therefore

which depends on both B and $\theta$.

Not the answer you're looking for? Browse other questions tagged magnetic-fields electrons magnetic-moment dipole point-particles or ask your own question.

1
Why are electrons inherently magnetic?
5
How do you fit a dipole in an electron?
2
Will an absorbed photon always be re-emitted with a different wavelength?
2
Subluminal Photons
1
Are contravariant basis vectors and basis 1-forms identical?