Why does a tire need to be filled with air?

The Mini 4WD's tires aren't full of air, and it can run. Also, the tank doesn't have tires with air. So, the question is: why do real cars on the road need to be filled with air? What is the idea behind it? 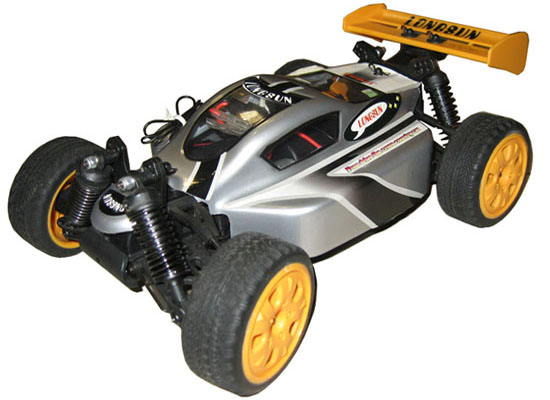 You don't want to lose energy – not only because of energy efficiency but mainly because the desire to achieve high speeds and reduce the deterioration of the wheels – when the wheels are changing their shape due to the pressure caused by the weight of the vehicle.

If you want to squeeze the wheels with rubber by a centimeter, you need a substantially greater force if the tires are filled with air whose pressure is many atmospheres than if you have "just the rubber". So inflated wheels at 4 atmospheres guarantee that the wheels are more rigid and the ride is smoother.

This advantage becomes more important at higher speeds because the wheel could get deformed many times a second at higher speeds. And it becomes more important for greater vehicles (relatively to toys) because their mass grows as $R^3$ with the radius $R$ while the area of the wheel is expected to grow as $R^2$ only. So the pressure – force per unit area of wheels – becomes greater for greater vehicles. Not an issue for toys but large vehicles need to have wheels that are resilient under much higher pressures.

Tanks are a different issue because the rubber is relatively very thin (relatively to "whole wheels made out of rubber") and it's the metal "right beneath" the rubber that is resilient and doesn't resist the pressure. Moreover, their speed is lower and they are going through a non-uniform terrain in which the adjustment of the shape of wheels or their counterparts may be a good thing.

Another question, kind of opposite to the original one, would be why the wheels are not just made out of metals. Well, that would be an uneasy ride and the metal would be damaged very quickly, too. One needs some "spare room" so that the tires' thickness may change by a few centimeters if it's really needed. On the other hand, one doesn't want the tires to change easily. A layer of the air at high pressure is a great and simple answer to both conditions.

Air is a good spring.

That toy car weighs only a few 100g, a real car weighs 2000kg. The ride on that car is very rough, you wouldn't be very comfortable driving over bumps in it.

Air is the best engineering solution. It works pretty well and it's light and cheap.

You need some compliance in the tyres for comfort and to help them grip the road. In principle you can make a solid tyre with the same compliance as a pneumatic tyre, but it would be more expensive and heavier.

Solid tyres are used where weight and comfort isn't a problem and/or speeds are low and the tyres need to be very robust. One example is on construction machinery. As you point out, in specialist applications like tanks tyres aren't used at all. But this is hardly representative of everyday driving: you can't ask people to stop firing at you while you fix a puncture :-)

The usage of air mainly lies in the fact - "The wheels of road vehicles have to encounter a marvelous number of obstacles along their way". Air (more specifically gas) has lower density, viscosity, has higher expansion coefficient and also exerts lower & much more uniform pressure on each and every surface of the tube. Moreover, it provides a medium for contraction and expansion to the tire regardless of the rubber or any other material (i.e.) Air contracts or expands easily. Thereby, it reduces the wear and tear caused by friction of rubber with the rim of wheel.

It should be noted that race cars & air crafts use Nitrogen instead of air because of its quality based on pressure and mainly humidity. That's another topic...

The Tires of Mini 4WD and many other toy cars don't require air because of their high-friction tires and less body weight. A toy car's body weighs some 400 g and its high dia tire weights some $20\times4$. Well, that's about 80g. Most toy cars have half (atleast 30%) of their weight loaded up in their tires in the form of rubber. Configuring a car like that would be air-less for sure...

But I can't imagine, "What happens to your BMW or Mercedes when loaded with airless rubber tires weighing half times the total body weight. Manufactures would become beggars overnight :-)

There are airless (non-pneumatic) tires which could be traditionally used..! Have a look over its practices. Military tanks, Bulldozers and several other heavy-duty vehicles use Continuous-tracks. Because, they've to move through rough surfaces and sometimes climb harder slopes easily (don't need a puncture). But, efficiency & velocity matters here. They can't go faster than 30-40 km/h. They have a lot of disadvantages like "gallons" of fuel requirements, damaging softer surfaces, etc. which make them worse than road-tires...

My question is, "Could you do a drift, drag, or add nitrous with these air-less tires?

Don't forget the tank wheel system (called 'chenille' (caterpillar) in french) is bullet proof, maybe mine proof. It requires much more energy since it's more friction (on top of a tank being VERY heavy) than conventional wheels.

Formula 1 have very big tires, but very tough metal springs. Tires are much better than suspensions since they are in direct contact with the road.

The smaller an object, the lighter it is, on a scale of cube root (I think): if you reduce the length of a car by 2, you divide its volume hence its weigth, by 8. If you put soft gum on RC cars, it's sufficient I think. (considering the car dimension are still proportional).

Because air is a cheap, light engineering material.

Now you can engineer a tire with many or all of those features that doesn't require air, but it will likely be more expensive, and heavier.

The heavier part is actually a pretty big deal - inflated wheels, for the load they carry, are very, very light weight. When you are accelerating, you would lose a lot of energy in speeding up the wheel if it had a higher mass, and when braking you'd have a harder time again with that stored energy. At high speeds these four flywheels can significantly alter the dynamics of the vehicle the heavier they are.

But if you have a laminated sequence of materials forming a thin shell, and air, you can have all the above benefits in a very low weight and low cost wheel.

The RC car in the OP is lightweight enough that the rubber shell itself provides sufficient support without adding pressure inside. The supportive abilities of rubber (and the various materials they use now) don't scale to the level of 1,000 pound vehicles in a thin shell.

Not the answer you're looking for? Browse other questions tagged everyday-life friction air or ask your own question.

-3
Is there any metal having the properties of rubber?

21
Why do people recommend wider tyres in car for better road grip?
41
Does car tire pressure change with weight of car load?
5
Why do racing tires (slicks) provide more traction with the road?
0
Pressure rating on a container underwater with hole and partly filled with air
1
Why does a corner slow a car down?
3
Heat reduction based on compression
1
Cars' wear resistance, quietness and water drainage dependence on thread pattern on tires?
2
Why do motorbikes' tires have very little to no tread, while cars' tires must have deep treads?