The James Webb Space Telescope (JWST) is expected to be launched in 2018 and operate in the L2 vicinity, about 1.5 million km from Earth. 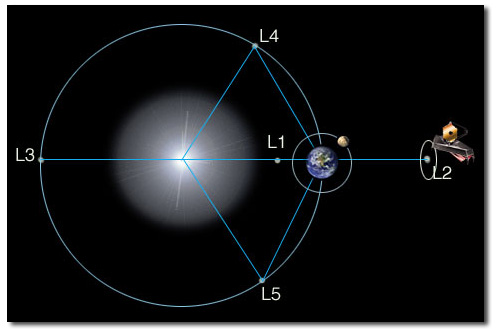 It will be placed in a halo orbit around the unstable L2 saddle point with a semi-major axis of about 500,000 km and a period of about half a year. I thought it interesting to determine the hypothetical mass at L2 to produce those orbital factors ignoring all other bodies. Using Kepler's third law, ${p^2} = {{4{\pi ^2}} \over {G({M_1} + {M_2})}}{a^{^3}}$, resulting in a mass of over ${10^{23}}$ kg, similar in mass to our Moon. Of course, JWST's halo orbit is determined by the complex interactions of the Sun's and Earth's gravitational fields and not by a lunar sized body located at L2.

What are the semi-major axis size limits that can be achieved in L2 halo orbits, and is halo orbit stability affected by these sizes?

This answer is an interpretation of the paper helpfully referenced by John Rennie.

First of all, as you note, the L2 Lagrangian point is an unstable equilibrium, so all orbits about it are unstable, requiring active station-keeping to damp out perturbations.

Orbits around the Lagrangian point are categorized as either:

Halo orbits are preferred for spacecraft, because the sun is never in-line with the spacecraft and the earth, minimizing communication interference (I think).

Lyapunov (in-plane) orbits. The small-signal stability analysis of in-plane motion yields 4 eigenvalues (natural frequencies): one real stable, one real unstable, and a pair of (complex conjugate) oscillatory eigenvalues. With just a single oscillatory mode, there are periodic orbits of arbitrarily small amplitude. (Again, station-keeping is required to damp out any appearance of the unstable mode.)

Halo (3 dimensional) orbits. Allowing out-of-plane motion adds another pair of oscillatory eigenvalues to the list (now at 6). Crucially, this new frequency is in general not related rationally to that of the in-plane oscillatory frequency, so periodic halo orbits do not exist at small amplitudes.

Back to the halo orbits. Qualitatively, as the orbit amplitude increases, the natural frequencies shift, and eventually a pair of complex eigenvalues becomes real (one stable, one unstable). (See Figure 3 in the paper. The analogy here is a root locus plot.) Since there is already an unstable eigenvalue, one more isn't that big a deal. The important thing is that now there is only a single complex pair of eigenvalues, corresponding to a single oscillatory mode, and periodic solutions become possible.

For the earth-sun L2 point, the paper reports the minimum amplitude for halo orbits to exist to be about 210,000 km (in the radial x direction), and calculates orbits in the range of 500,000 km.

Not the answer you're looking for? Browse other questions tagged newtonian-gravity orbital-motion stability or ask your own question.

9
Orbit through L4 and L5
13
Mars just collided with Earth! A question of eccentricity
6
What is the precise definition of Gravitational Sphere of Influence (SOI)?
6
How “large” is a Lagrange point?
0
Can the constant $k$ from Kepler's third law be independent of the mass of the planet?
4
Is it possible to have stable orbits around Lagrange point $L_1$?
4
Kepler's 3rd law applied to binary systems: How can the two orbits have different semi-major axes?
1
Are there “eccentric seasons”, where do they occur, and why don't we hear more about them?