"If many coplanar forces are acting on a body, then the algebraic sum of torques of all the forces about a point in the plane of the forces is equal to the torque of their resultant about the same point." 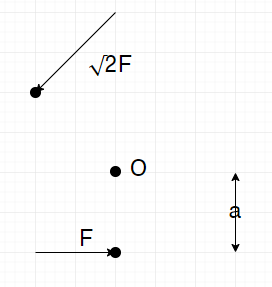 Clearly Varignon's theorem breaks down in this case. I've read elsewhere that Varignon's thorem doesn't apply for cases where a couple of forces is involved. And that's obvious. Because resultant of couple is 0 force which gives 0 torque - and that is wrong.

But in this case, the two forces don't seem to form a couple. The horizontal component of √2F force does form a couple with the bottom force, but that way, in a generalised problem with n forces, many components can form a couple. So how do we know when not to apply varignon's theorem?

Varignon's theorem is applicable only for concurrent forces. The quoted part is incorrect and has been fixed (). For non-concurrent forces, the point of application of resultant force will change according to the moment.

"But resultant of the two forces = F in downward direction gives us the torque Fa" That is wrong!!!!

You must find the point where you can apply the sum of the force : here it is (-3a,-a) from the point O! So you find the same result 3aF for the moment at the point O :-)

You have misunderstood the application force explanation, you can't sum the force than choose a point of application wich is one of the 2 forces, it's impossible. Regards

Not the answer you're looking for? Browse other questions tagged newtonian-mechanics forces rotational-dynamics torque statics or ask your own question.

1
Do supports exert torque?
40
Is torque as fundamental a concept as force?
1
Finding net torque on an object when all forces pass through a common point by finding the net force first
1
Would the rod translate in this case, or only purely rotate?
0
How is there moment for a group of forces which its resultant equals zero?
3
Where should the reference point be considered during torque measurement?
4
How are force couples free vectors?
1
Why do internal torques cancel?