Why possibility for X-ray to excite inner electrons higher than outer electrons?

It seems X-ray absorption spectroscopy is usually ascribed to the interation between photons and inner electrons. Does it mean inner electrons are much preferred by X-ray photons to outer electrons? If so, why? Thank you very much!

From the wikipedia article on x-ray absorption spectroscopy:

X-ray absorption spectroscopy (XAS) is a widely-used technique for determining the local geometric and/or electronic structure of matter. The experiment is usually performed at synchrotron radiation sources, which provide intense and tunable X-ray beams. Samples can be in the gas-phase, solution, or condensed matter (i.e. solids).

XAS data are obtained by tuning the photon energy using a crystalline monochromator to a range where core electrons can be excited (0.1-100 keV photon energy). The "name" of the edge depends upon the core electron which is excited: the principal quantum numbers n=1, 2, and 3, correspond to the K-, L-, and M-edges, respectively. For instance, excitation of a 1s electron occurs at the K-edge, while excitation of a 2s or 2p electron occurs at an L-edge (Figure 1). 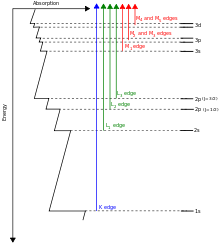 If you read further you will see that this is a photoelectric effect , where the X-ray scatters and kicks off a bound electron, i.e. a transition from n=1 or 2 or 3 to infinity.

The reason Xrays scatter off inner orbit electrons is because when the frequency of the X-ray is the same as the energy level of the electron it can transition to infinity ( the quantum mechanical probability of transitioning is high) and the result is seen as the absorption of the X-ray at that frequency/energy. X-rays ( as TMS also observed) are too energetic to be absorbed totally by outer electrons. The transition is a quantum effect, i.e the probability of scattering as a compton scattering is very low, and it will not show in the absorption spectrum as a distinct transition.

I was wondering this myself! I found part of the answer and thought I'd share it here for others.

As a side note, this is something that must be kept in mind in x-ray photoelectron spectroscopy (XPS).

Moreover, one should bear in mind that the cross-section for excitation is different for different electron levels, which greatly affects the shape of the spectra. For example, x-ray photons also eject electrons from the valence band, not merely from the deep core levels. However the valence band features in the XPS spectrum are very weak (see Fig. 5.20) due to very low photoelectric cross-section for shallow valence band levels at typical XPS photon energies. In general, photoemission has a maximum probability at photon energies close to threshold and drops off rapidly when the photon energy exceeds sufficiently the electron binding energy. Therefore, XPS is a tool to probe mainly deep core levels.

A little googling sheds some light on the second part. From J.J. Yeh, Atomic Calculation of Photoionization Cross-Sections and Asymmetry Parameters The atomic subshell photoionization cross section in the dipole length approximation is

The important part here seems to be the terms

$$ R_{l\pm 1} = \int_0^\infty P_{nl}(r)rP_{\epsilon,l\pm 1}(r)dr $$ $P_{nl}(r)$ is the radial wavefunction for the bound electron (before it is emitted) and $P_{\epsilon,l\pm 1}$ is the radial wavefunction for the ejected electron (after it is emitted). So, in hand-wavy terms, the probability that a valence electron is emitted seems to be smaller due to a smaller overlap between the wavefunction of the high-kinetic-energy emitted electron and the wavefunction of the bound valence electron. I think this gives a little more insight, but perhaps the answer is a little more skewed towards "because quantum mechanics says so".

As you maybe already know, in hydrogen atom energetic levels are proportional to $1/n^2$ where $n$ is main quantum number (orbit number), so the bigger $n$ (the further our orbit) makes $\Delta E$ smaller, thus we need less energy to excite the electron, but as you know X-Ray has relatively high energy, so to be sure that our high energy photon will be absorbed by some electron, we need this electron to have next nearest energetic level relatively far to jump to (remember Bohr's postulates, when election jumps from one orbit to another he will absorb/emit photon with energy equal to the difference of energetic levels that he jumped between)

Now what related to far orbits, electrons there can be excited too, anyway that not because we have "some" photons in our X-Ray with smaller energies, but because electrons can not only jump to nearest orbits but can "skip" couple orbits and jump further if they have excited by high energy photon, anyway, quantum mechanics says that probability of such jump (with skips) is quit small comparing to usual jumping.

I never did the quantitative calculation.

But possibly it can be understand in this way. Note that a free electron cannot absorb a photon. Therefore, it is not so surprising that a loosely bound electron has less possibility to be kicked out by a high energy photon.

4
On-shellness of photons
2
Emission of Characteristic X Rays
0
How does frequency mixing work in a non-linear crystal?
0
Can core electrons emit (visible) light?
0
Doubts about Quantum Physics: Collision by electrons
1
Why is the screening coefficient, $\sigma_K$, in Moseley's law only constant for high $Z$ and how can it be anything other than unity?