How does visible light generate heat?

I work in a chemistry laboratory. We are currently trying to understand photochemistry. In our studies, we typically use LEDs of different wavelengths. For example, 365 nm, 405 nm and 450 nm. When I shine the LEDs on surfaces such as a bench or skin and try to measure the temperature of the surface, the temperature goes up as the wavelength increases. My understanding was that IR light is associated with thermal heating. Could someone explain how in the series of LEDs I am using, longer wavelengths tend to generate more heat compared to shorter ones? I think all 3 LEDs are of similar intensity.

There is no universal law saying that the absorbance for infrared light should be greater than the absorbance for visible light, so the outcome of experiments like yours, will depend on the absorption coefficients of irradiated objects with respect to specific wavelengths.

As an example, the graphs below (copied from this site) show the absorption coefficient spectrum for different skin components. 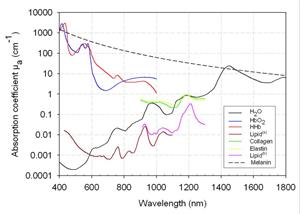 So, what you've observed in the lab may say something about the light absorbance properties of the objects you've tested, but is not an indication that light with a longer wavelength produces more heat.

There is a lot going on here.

First, individual photons are very small packets of energy. Visible light is in the wavelength neighborhood of 500 nm.

And each visible light photon has energy $E=h \nu$ in the neighborhood of $3 \cdot 10^{-19}$ Joules. So for you to feel the warmth from visible light there has to be a very large number of photons per second. Shorter wavelength means higher frequency and higher energy per photon.

The number of photons per second is going to depend on the details of the light source. And different color LEDs could very easily be very different in their efficiency.

As well, they could be generating different amounts of heat internally, so you need to be careful in your experiment not to be contaminated by, for example, heated air around the LED. I will assume you have been quite careful in this regard.

Next, you have efficiency of absorbing the light. For example, if you have red light falling on red paper (to make an extreme case for illustration) then a lot of that light will simply be reflected. Blue light falling on the same paper will tend to get absorbed more. The fraction of light that is absorbed is tricky to determine. You would need to measure the total and the absorbed. Or the absorbed and the reflected. Or all three, ideally. Different materials will definitely absorb different wavelengths differently.

So, putting that all together, you get a very complicated picture trying to figure out which LED is putting out more light energy and which will heat a given target more.

As to infrared being associated with heat. This has a few aspects.

When an object is glowing hot, such as the element on an electric stove, then it tends to put out a lot of photons in the near infrared. If you get a camera that can "see" in infrared then it can, in some cases, see when the amount of visible light is extremely low. This is how some kinds of night vision goggles work. When you use such things, warm objects tend to appear much brighter than cold objects. So infrared gets associated with heat.

Additionally, there is a thing called a heat lamp. This is a device that has relatively low output in visible light, but has high output in the near infrared. And usually it has a spot-light sort of profile to concentrate the light. You see such things in some restaurants to keep the food warm between the time the chef puts it on the counter, and the wait staff takes it to serve. This is done more because the light is not uncomfortable to look at as a very bright visible light might be.

Not the answer you're looking for? Browse other questions tagged thermodynamics visible-light photons or ask your own question.

7
Why is infrared radiation associated with heat?