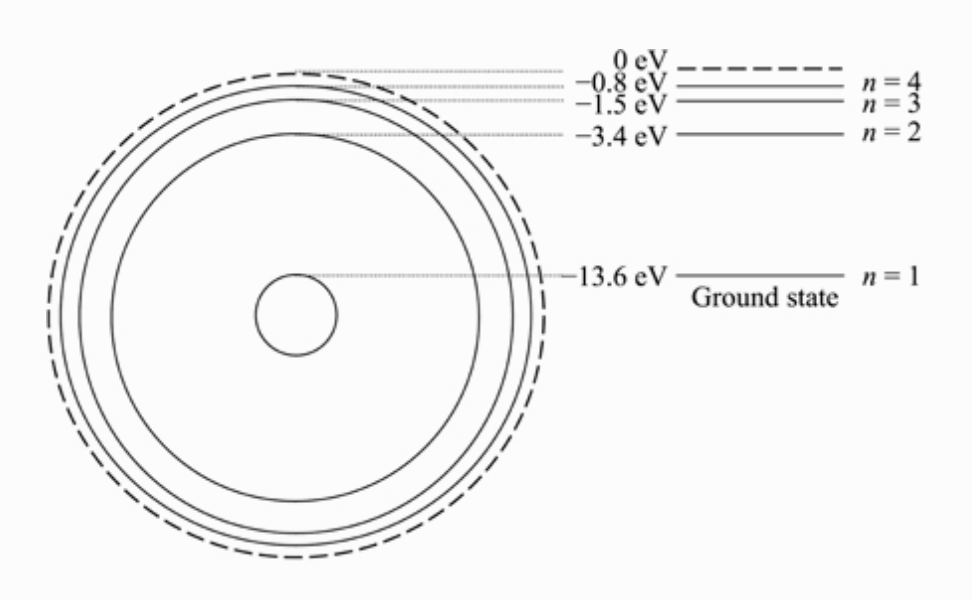 However, in this Khan Academy video https://www.khanacademy.org/science/physics/quantum-physics/atoms-and-electrons/v/atomic-energy-levels at 9:22 the narrator states that if an electron has more than zero energy then it is ejected, which is what I would think would be true.

In other words, the ionization energy is the energy required to remove an electron from the ground state to the vacuum state where it has zero kinetic energy.

In the hydrogen atom of your illustration, the electron is assumed in the ground state, i.e. it has fallen into the potential releasing a photon of 13.6eV . To separate the electron and proton from the potential, energy has to be supplied equal to 13.6eV by a photon ( since this is the electromagnetic force that binds atoms). Once supplied you would have an ion ( the proton) and the electron at rest with each other, and unless they interacted with some other particle, they would fall back to the ground state, releasing a 13.6eV photon.

If an incoming photon with higher energy than 13.6 eV hits a neutral hydrogen atom there is a quantum mechanical probability that the hydrogen atom will split to an ion and an electron carrying away positive energy and possibly a degraded photon. This is a quantum mechanical problem that has been studied as you wills see if you google "hydrogen photon scattering" and is not simple, even for such a simple atom.

The ground state energy is a level in the potential, so energy has to be supplied either to go to higher allowed states our break away from each other.

I would disagree with the statement : "if an electron has more than zero energy" because in principle it is a system of two particles that will be gaining or losing energy, the proton and the electron. One in quantum mechanics speaks of energy levels of the bound electron, but it is the system that has the energy. If more than the ground state energy is supplied to the system the two particles will separate. The electron and the proton are equally ejected from the bound state, except that the proton mass gives it small motion with the equal and opposite momentum of the electron , necessary for momentum conservation, since its mass is so much larger.

Your book's claim is correct, and both of the definitions you quote are equivalent.

We normally fix the zero level of energy by specifying that, at zero energy, the electron is no longer bound to the nucleus, and it is therefore free to escape - but it has zero remaining kinetic energy when it (asymptotically) reaches infinity; in the Kepler problem, this corresponds to a parabolic orbit. Electrons in such a state are definitely unbound, and if you add a static extraction field (as in photoelectric-effect experiments) then that field will take the electron away.

The core role of the ionization energy is as a threshold. It is defined as the difference between the ground-state energy and the zero-energy level, and thus

To that, your natural next question is almost certainly "and what if you supply the electron with exactly the ionization energy?", to which the answer is: you can't.

That said, mathematically speaking, there is a state at zero energy, described in more detail in this MathOverflow thread - but really, I would leave the question of what happens there until you've had a proper go at the full mathematical toolkit of quantum mechanics.

As to why your book has drawn it as a dashed line - it's because the ionization threshold acts as an accumulation point for the Rydberg-state energies, which 'bunch up' as $n$ increases. Instead of drawing all of them (which is just not possible) we often draw their limit point as the dashed line in your book. How you went from a dashed line to "that level is imaginary" is a bit beyond me, though.

3
Ionization Energy and Bohr
0
Do electrons collapse into nucleus, if electrons in the atom are constantly excited?
3
Does the energy of ground and/or excited states have uncertainty?
4
Effect on electron shells energy levels during nuclear decay
2
Necessary photon energy for electronic excitation
7
Does ionization process release energy?
1
Ionization energy meaning in terms of Bohr model