How does the pressure change with the change of temperature in this device? and why every time the mercury level should reach Zero in the first tube? I understood that two pressure points are measured, at the ice and the steam points. Then we plot these two pressure and temperature values. After that, we can know any other temperature from the graph.

How does the pressure change with the change of temperature in this device?

The pressure changes with temperature according to the Gay-Lussac's law, which says (according to Wikipedia) that "for a given mass and constant volume of an ideal gas, the pressure exerted on the sides of its container is directly proportional to its absolute temperature".

why every time the mercury level should reach Zero in the first tube?

The mercury level does not reach Zero by itself - it is brought to Zero by physically moving the second tube up or down. Since the mercury in the first tube is kept at the same level, the volume of gas does not change and we can apply the Gay-Lussac's law.

You should be able to see how it works if you look at the diagram below (based on the image copied from this document). 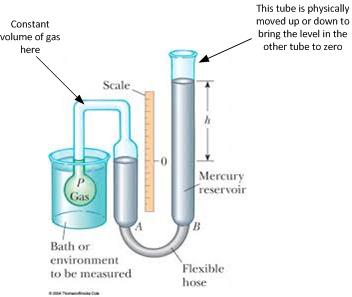 When the temperature rises, the gas expands and pushes the mercury in the left tube down until the increased difference of mercury levels between the two tubes equalized that pressure. By manually moving the right tube up, we put still more pressure on the gas and force it to shrink to its original volume. The resulting difference in the mercury levels will be equal to the final pressure of the gas.

To see how it is done, you can check out this video.

9
How does the temperature of the triple point of water depend on gravitational acceleration?
2
Constant Volume vs. Constant Pressure?
1
How constant volume gas thermomether keeps the volume constant?
2
Is my thermometer faulty?
0
Understanding calculations about phase changes
2
Gas expanding into vacuum
0
Specific Volume vs Temperature Graph
1
Defining the Ideal gas thermometer
0
Calculate volume of void in a thermometer