Is there a possible solution here to who carries more weight? [closed]

I am usually skeptical of riddles online that have to do with Physics but this one struck me as they had an oddly specific answer to it. So my question is for the following picture: 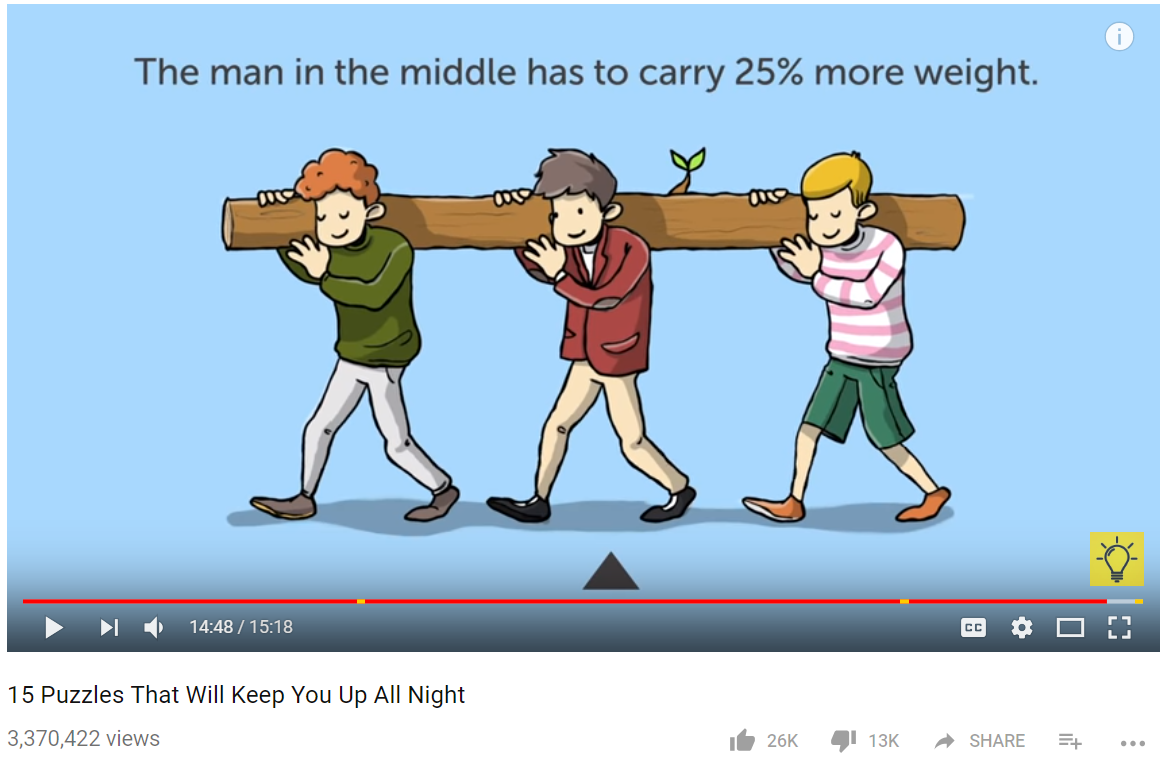 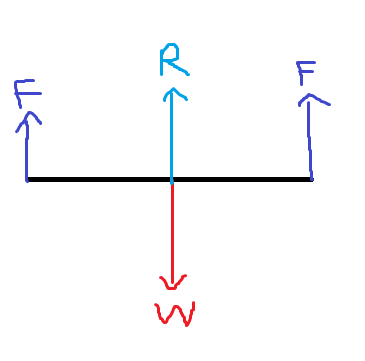 I simplify a bit with placing the two men at the very ends and the middle man at the exact center of the log in line with its center of mass(considering log to have weight $W$). I know I have to find the normal reaction force on the middle man, suppose it to be $R$ and I know by solving moments that the normal reaction for two men on the sides are equal, both equal to suppose $F$. Now even if I solve using both resolving vertically and using moments I end with the same result of : $$2F+R=W$$ Even if I consider the two men at the ends to be not exactly at the ends but at a length $l$ from either side, we get using moments $2Fl+Rl=Wl$ which again ends up as $2F+R=W$.

This is a problem of Mechanics of solids. You are right in using the concept of moment equilibrium to get the equation 2F+R=W. But the thing is that this is a statically indeterminate problem. I'll tell you why, in the above equation you have two unknowns F&R. So for two unknowns you need two distinct equations, but here if you apply the other static equation of equilibrium (sum of all downward forces = sum of all upward forces) , you get the same equation W =2F + R. Statically indeterminate problems are solved by basically two methods: force method and displacement method. I have a similar problem in my book solved by Castigliano's theorem. I will present the solution briefly. Let the length of wooden log be 2a. We can consider the situation in riddle as a beam of negligible self weight, under the action of the same weight W but with it being uniformly distributed over length 2a, having load intensity w, such that w*2a = W. Also the three men are replaced in beam analogy by three rigid(non-deformable) supports.

Now, under the condition that the two men on the ends are both totally extreme i.e 'a' distance away from the middle man and that they both exert equal force F on the log, then the man in the middle will have to exert a force R= 5/4 wa = 5/8 W; since w*2a =W.

Unless there is more to the puzzle than the image suggests, it seems to me fairly straightforward to show that the two outside men carry an equal amount of weight and the inside man carries any weight not carried by the outside men. If either outside man carries more weight than the other, the log tips over. The middle man can carry any amount of weight (he could even not be there).

This riddle is wrong because a log is far stiffer than a person, so the appropriate assumption is that the log does not bend, but people are squished down by an amount proportional to the weight they carry (replace people with springs).

If the log remains horizontal and does not deflect, then each person is squished by the same amount, and thus each carries $1/3$ of the total weight.

4
A simple (?) problem of static equilibrium

5
Why do your fingers alternate then meet at the center of mass of the object?
3
Can two bodies of different mass attached at ends of string passed over a frictionless pulley produce equal tension on both sides?
1
Distribution of weight of an inclined object
0
Time taken to experience a force
0
What is the direction of Tension Force in a rope pulled at its two ends with equal forces?
1
Static equilibrium - Ladder against a wall, how far can person ascend
0
Confused about forces acting in this simple statics problem
0
How can the center of mass accelerate in this case?