What exactly is happening in a laser's gain cell when the irradiance is greater than the saturation irradiance?

Also can someone offer a clear conceptual treatment of the gain-coefficient and its connection to the effective pump rate densities.

I apologize if my question is vague, I'm just having trouble seeing their connection.

Below is a diagram of a 4-level gain medium (courtesy of wikipedia). 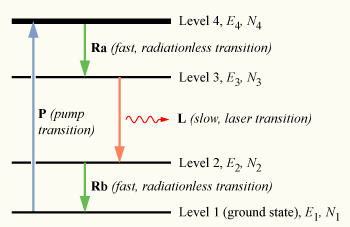 Conceptually the following steps occur to get to the saturation point:

The gain medium is like a self-damping system, the more photons (higher irradiance), the faster $N_e$ is depleted, and the fewer $N_e$ states exist for stimulated emission, so the gain in irradiance will slow down. Pumping takes time and the pumping rate is fixed, so there will exist a point at which the pump can no longer maintain a population inversion, in fact the system can dip into absorption for very short periods. The irradiance at this point will be the maximum possible.

Not the answer you're looking for? Browse other questions tagged optics visible-light laser or ask your own question.

2
Does the gain medium in a laser need to be replenished?
6
Why not just pump directly to the $3^\mathrm{rd}$ level directly in a $4$-level laser system?
0
About the flow of light energy through any medium
0
Gain medium and the speed of light
0
Can any material be used as a laser medium in principle?
0
Why gain medium of a solid state laser are polished from sides facing mirrors and the rest is unpolished?
1
Why is four-level laser more efficient than three-level laser?