If the bound states to the infinite square well are stationary waves, why does the ground state consist of half a wavelength?

For a stationary wave, you need two counter-propagating travelling waves that 'reflect' off the boundaries of the well at either end then superimpose in the middle to produce a stationary wave.

If this is the case, then, for the infinite square well why is the ground state a travelling wave?

I call it a travelling wave as it doesn't have a long enough wavelength to 'reflect' of the walls and produce it's own standing wave. The image below may put my confusion into context: 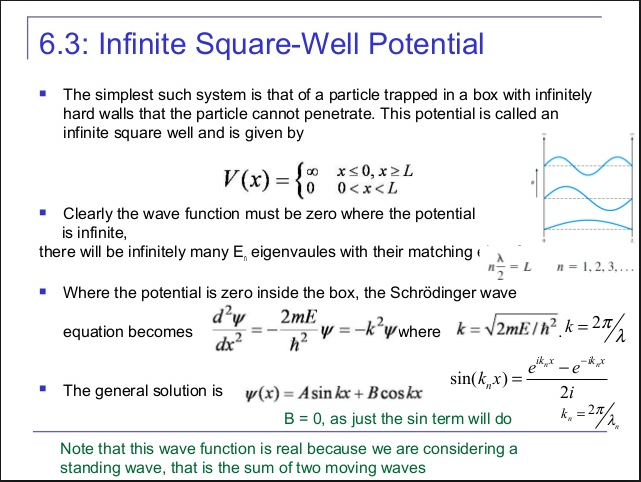 The text in green at the end says it all, and it confuses me even more as it just raises yet another question: Do all of the bound states (1st excited, 2nd excited etc.) need 2 counter-propagating (travelling) waves to produce their standing waves?

But, that was solid state physics, not quantum mechanics.

Is there perhaps something else I am missing here?

We have found a standing wave, where $A(x,t)$ is a product of a function of $x$ only, and a function of $t$ only. Finally, if we add another closed end to the pipe at $x=-\ell$, we only get a standing wave if also $\sin(-k\ell) = 0$. This makes only certain frequencies / wavelengths admissible: the length $\ell$ of the pipe will have to be a multiple of half the wavelength.

Finally, the boundary conditions here are the same as for the pipe with two closed ends, and the lowest energy solution is only half a wavelength. This is no reason not to call this a standing wave. In other physical situations, possibly sometimes in solid state physics, the boundary conditions will be different and the ground state will contain a full wavelength. The infinite square well is not one of these situations ;)

Not the answer you're looking for? Browse other questions tagged quantum-mechanics waves wavefunction schroedinger-equation wavelength or ask your own question.

4
Finite potential well problem - calculating the ground state
3
Heat diffusion: evanescent waves?
1
about to create a standing wave
1
Standing waves due to two counter-propagating travelling waves of different amplitude
0
When QM particle in a box is in the first excited state, will it be ever found at the middle point, ie. at the nodal point?
2
Why is a single string's vibration very weak but on the other hand, a guitar's string can be very loud?
1
Are there two kinds of boundary conditions for Density of States of electron in 1D/2D/3D bulk?
0
Infinite square well bound states
2
Why standing wave conditions don't include a phase difference of π
1
Can the Helmholtz equation be applied for a system with multiple frequencies?