Why aren’t photons re-absorbed into the electromagnetic field?

I understand that the quanta of electromagnetic field is a photon.

But why don’t the photons (which are each their own anti-particles) annihilate somehow and become re-absorbed by the electromagnetic field, whose mechanism is the photon?

Here is my understanding/definition of a virtual photon as explained in Virtual and Real Photons:

Here is my answer to what I think is your actual question: "why don’t the photons (which are each their own anti-particles) annihilate somehow? "

This can happen only if the photons get back into exactly the same phase and relative position as when they were created. This is practically excluded by statistics for the case of an electron positron annihilation reaction. In principle the reverse reaction can occur under the right circumstances.

I understand that the quanta of electromagnetic field is a photon.

The electromagnetic wave is a solution of the classical maxwells equation and is out of electric and magnetic fields. It is not a field by itself.

There is no classical electromagnetic field. The quanta which compose light are the photons, and the classical fields emerge from zillions of photons.

There is no absorbing by the electron field, ( or photon field or...)which is a type of coordinate system that allows calculation of cross sections and decays.

And the process of electron-positron annihilation releases two photons when the matter/anti-matter pair are re-absorbed into the electron field. 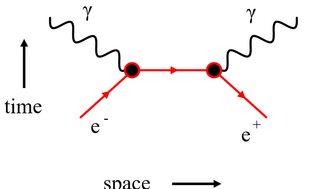 Again this is a misrepresentation of the model used in calculating electron positron annihilation. There is no re-absorption

Not in the sense you are thinking about it. In the diagram, a creation of an electron which becomes virtual and annihilates with the positron into two photons is mathematically represented.

And the process of electron-positron annihilation releases two photons

when the matter/anti-matter pair are re-absorbed into the electron field.

There is no re-absorption. The electron field as well as the positron field exist whether there is an interaction or not. The interaction happens with the creation and annihilation operations.

This is how I understand the process.

You have to rethink.

The photons emerge at an angle, defined by the invariant mass of the e+e- system, and leave the interaction region with velocity c, as a disturbance on the photon field with consecutive creation and annihilation operators , if you want to visualize it, on the field. In fact if one wants to really model the leaving photons ( or specific particles) one has to use wave packets.

So they cannot meet at an interaction vertex to annihilate.

The second reason is because the all pervasive photon field is like a coordinate system, a Lorenz invariant aether, it does not contain particles, just possibilities to calculate Feynman diagrams.

and become re-absorbed by the electromagnetic field, whose mechanism is the photon?

So there is no re absorption . It is not within the quantum field theory model.

Not the answer you're looking for? Browse other questions tagged electromagnetism electromagnetic-radiation photons quantum-electrodynamics virtual-particles or ask your own question.

9
What's the relation between virtual photons and electromagnetic potentials?
6
Photon as the carrier of the electromagnetic force
1
What does “Information” and Virtual Particles mean?
9
Is there a “difference” between photons that act as virtual particles and photons that act as the quanta of EM radiation?
6
In QED, why is the $e^- + e^+\leftrightarrow\gamma$ process forbidden on-shell?
1
How to describe the phase change for a charged matter wave in an external magnetic field using virtual photons?
4
Electron interaction with the field vs. wave
3
How much virtual photons does an rest electron emits instantly, per time?
3
How are photons of the electrostatic and magnetostatic fields different from electromagnetic radiation?