Is Fermi Level a property of the material?

I have gotten myself confused about the band structure explanation of semi-conductors vs insulators. The Wikipedia picture

and the explanation surrounding it seem to suggest that Fermi Level is a property of the material. I understand how Fermi-Energy is a property of the material: it is the highest energy occupied by an electron at zero temperature. But Fermi level as shown in the picture doesn't make sense to me as there is nothing special about that level intrinsically for semi-conductors and insulators. Furthermore, there is no state there to occupy.

If I think of Fermi-Level as the external voltage (or chemical potential in the grand canonical ensemble) the pictures make sense but then its not an intrinsic property of the material (which is not the way its usually stated) and in that case I also do not see the difference between a semi-conductor and an insulator.

Take a look at the Fermi-Dirac Distribution Function.

$f(E)=\frac{1}{e^{(\frac{E-E_F}{kT})}+1}$, and the Fermi Energy is the maximum energy such that $f(E)=0.5$, i.e. the probability of the quantum state being occupied by an electron is exactly half. By judging this equation, we can safely say that the Fermi energy is an intrinsic property of a material.

For an insulator, notice the large band gap. Take diamond, for instance. Diamond has a band gap of $5.5eV$, which is extremely large. However, for semiconductors, the band gap a relatively smaller, such as $1.1eV$ for silicon, which can be easily achieved when a potential difference is applied. In my opinion, the image there isn't a very good picture fo what happens. Check out the image below. 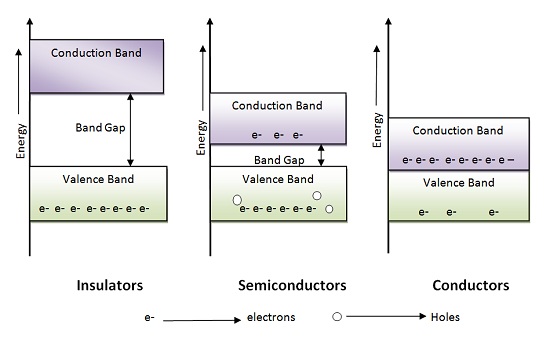 For the different types of semiconductors, such as p-type and n-type ones, the Fermi levels are lowered and raised due to the addition of trivalent or pentavalent elements respectively. For p-type semiconductors, the addition of trivalent elements result in more holes than electons, carrying a more positive charge. Hence, Fermi level drops down with less negative charge carriers. The opposite happens for n-type semiconductors. Hope this clears your doubt.

TL;DR: You can obtain the Fermi level from the band structure plus knowledge about the electron density of the crystal, both of which are intrinsic to the material.

Suppose the independent electron approximation (cf. Ashcroft & Mermin) holds valid for your crystal under consideration. Furthermore, assume that the crystal is finite with periodic boundary conditions (which does not affect the thermodynamic limit and hence can readily be assumed). Then the band structure of the crystal is an intrinsic property of the crystal. Indeed, it is just a clever way of visualizing the energy eigenvalues of electrons in the crystal and since we have a finite crystal there are only finitely many allowed crystal momenta. Hence, below any chosen energy value there are only finitely many energy eigenvalues of this system. Now assume there are $N$ electrons in our crystal. Note that the electron density is an intrinsic property of the crystal, hence the number of electrons $N$ is intrinsic as well as soon as we know the size of our crystal. If we now fill all of the $N$ lowest energy eigenstates of our crystal(/band structure) we end up with a highest occupied energy level, which we just call the Fermi Level. There is a slight variation of the definition in the case that above the highest occupied state there is a band gap, but still the Fermi level is completely instrinsic from our considerations.

What is now interesting is that since the number of allowed crystal momenta scales linearly with the spatial extent of the crystal, the number of eigenstates below any threshold scales proportional to the number of electrons in the crystal. Therefore, the Fermi level is even independent of the size of our sample and it is even more an intrinsic property.

In my considerations I assumed that I can think of filling up the energy level with "single independent electrons", which ignores a part of electron-electron interactions. Therefore, my argument will not extend to crystals in which the independent electron approximations breaks down.