Why is the de Broglie wave the shape it is? [closed]

Why is it that de Broglie waves or any other type of waves (quantum level) fluctuate? What causes them to rise and fall in shorter and longer wavelengths? In other words, what's preventing them from traveling in straight lines? Is it an effect of the space-time continuum?

Edit: It has become unclear as to what exactly I am asking here. To put it in simple terms: Why do things travel in waves? Why can't they just travel in straight lines and make it much more easier to not stray off course?

My apologies if this is not new to you, (unless I have it badly wrong:).

Take this from another point of view, that is, rather than ask why it takes the form it does, ask instead why do we need to use a wave equation in the first place, especially one that resembles a classical wave?

We observe a physical phenomenon and we need to explain it, in mathematical terms ultimately, but as we think in 3D we need a mental picture to visualise the effect and to help us predict the result.

Say in this case it's the bands of electrons on the back screen on the double slit experiment.

We need to explain why we see this (the blue dots below), when we project quantum particles through the slits : 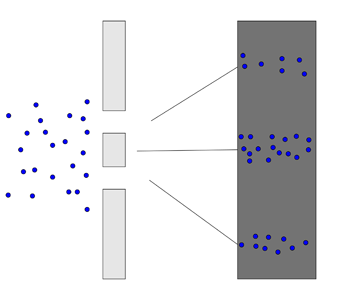 The easiest method of explaining the effect is to "imagine", (our best guess, backed up mathematically), that the electrons travels like a wave and arrives like a particle.

So we can use a wave equation, that is the solution to the Schrödinger Equation, to calculate the probability that an electron will appear where it does.

So the fluctuations in the wave are because we need to explain the diffraction effect and how the waves being out of phase can produce the bands of electrons. Without this phase difference, (that is with a plane wave, or without wave packets), we would not be able to explain this banding effect.

These features of the probability wave mimic the classical water wave to a large degree.

And that's great, up to a point.

The problem, depending on how sanguine you are about the many different possible interpretations of quantum mechanics wave/particle duality, is we (well, some of us anyway), would still like a better explanation of this behaviour. From my count, we have at least 8 different interpretations of this fundamental quantum phenomenon.

This is completely opinion based, but I would be prepared to bet that if other problems such as quantum gravity (the fusion of General Relativity and Quantum Field Theory) are ever solved, we will need to subsume the Schrödinger Equation and the (temporary but very useful) mental picture of a fluid like wave it provides and we will end up with a more sophisticated, (but possibly simpler in the right mathematical setting,) version of the wave we have today.

To sum up, we don't know what causes the wave, we only know that it currently "explains" many quantum theory based effects.

Not the answer you're looking for? Browse other questions tagged quantum-mechanics waves or ask your own question.

6
Do composite particles that are electrically neutral but have charged constituents radiate?
0
Particle Wave and time

18
What does a de Broglie wave look like?
2
Interpretation of de Broglie wave
1
Question about De Broglie Wavelength
2
Why Shock wave propagation is faster
1
Influences on wavefunction path analysis
0
Derivation of the De-Broglie wave relation
0
Why doesn't the sunlight supersede the effects of the bodies of water and the ground on the temperature of the atmosphere?
1
Acoustic Standing Wave and Shape of Pipe