Why is there no magnetic field around a wire connected to electricity at home?

Is it true that an electric current that flows through a conductor creates a magnetic field around the conductor?

If yes, then why doesn't the magnetic sensor of my mobile device react in any way to changes when I bring the device near to the wire connected to 220 V electricity at home?

There are two wires, the second wire carries the equal (!) return current. The magnetic fields from the two wires cancel out, except at very short distance. For measuring the current from the field you must clamp only one of the wires.

The field at a distance can be further reduced by twisting the wires ("twisted pair") or by adopting a coaxial structure ("shielding"). There you have one of the first principles of electromagnetic compatibility: the magnetic field is proportional to the area of the current loop. Two wires close together don't form much of a loop, and that is why UTP ethernet works so well.

On the other hand, if you deliberately make a large loop, say a few windings around your living room, and you feed an audio current through it, then a hearing aid in the "telephone" mode will easily pick up the audio signal. Every auditorium or theater has this service, for the hard of hearing.

I can see 2 possible reasons why your phone does not detect a magnetic field.

First, a magnetic field is generated when current flows. A simple wire carries no current. So, unless the wire is part of an active circuit (e.g. a lamp that is turned on) there will be no magnetic field.

Even if there is a current flowing, it will be a 50 Hz current, so the current and the magnetic field reverse 50 times per second. That is probably too fast for your phone to detect.

There are a number of reasons as to why you have been unable to detect the magnetic field due to a mains cable carrying current.

First of all it might help to be conversant with some of the characteristic and position of the magnetometer in a smartphone. 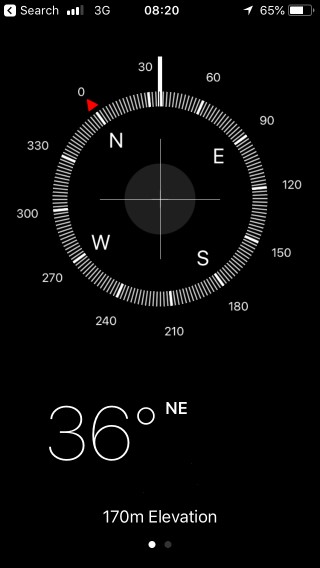 A step forward would be to get an app which increases the sensitivity of the displayed magnetic field.
The one which I have used is Sensor Kinetics which is available for both the iOS devices and Android devices.
The opening display might look like this noting that I have eliminated the displays for the other sensors which are contained within a smartphone. 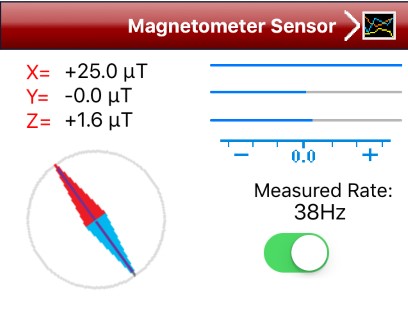 This display shows one of the problems with the detection of the fluctuating mains magnetic field at $50\,\rm Hz$ - the sample rate of $38 \,\rm Hz$.
However the x,y and z-components of the magnetic field are displayed to a reasonable sensitivity.

Although you can use this screen activating the time varing screen (top right hand icon) will produce a screen with the magnetic field as a function of time. 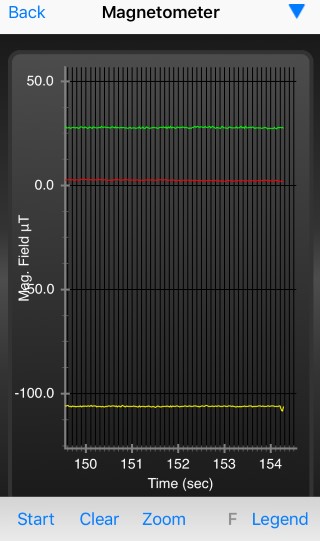 Using this screen and a jeweler's (small) screwdriver (do not use a permanent magnet) you can locate the position of the magnetometer watching the display whilst moving the screwdriver around the screen
Mine seemed to be top left of the phone.

The act of putting a mains cable which is carrying no current will disturb the magnetometer reading before settling down. 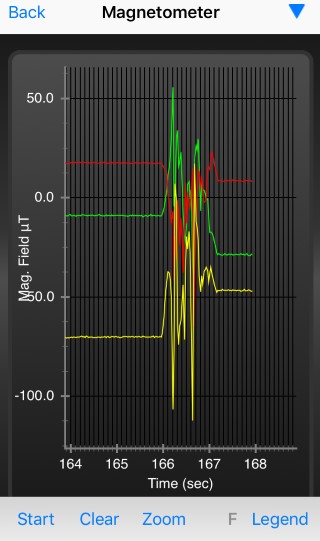 Switching on the current (to an electric kettle) shows the effect you were looking for. 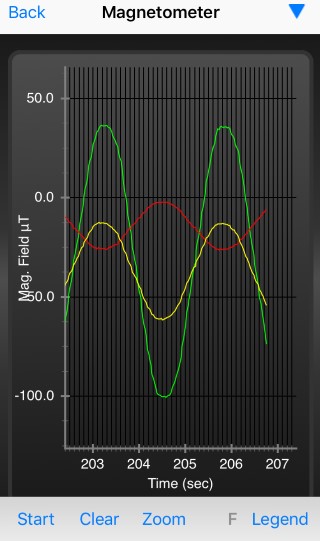 The variation of magnetic field is not shown a being at $50 \,\rm Hz$ because the sample rate is not great enough.

So you are trying to detect a magnetic field which is varying at $50 \,\rm Hz$ and is actually smaller than one might suspect in that the detected field is due to two currents which are travelling in opposite directions through the live wire and the neutral wire so their magnetic field almost cancel each other out.

Just detecting the magnetic field from only the live wire carrying an alternating current should produce a larger effect.
Perhaps it would be safer to investigate the field due to a current driven by a lower voltage eg from an unrectified and/or unsmoothed low voltage power supply?

Is it true that an electric current that flows through a conductor creates a magnetic field around the conductor?

Yes. Indeed, if that were not the case, the millions of clamp ammeters (like these) sold would be useless. 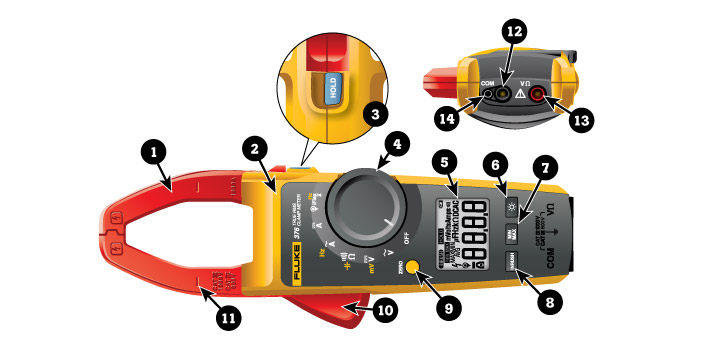 Notice the construction of the clamp ammeter and, in particular, the fact that jaws must enclose just one of the current carrying wires.

Yes, it is true that an electric current that flows through a conductor creates a magnetic field around the conductor. This is how all electric motors work, simply by the magnetic effect of currents flowing through conductors. Why is this not visible using your magnetic detector?

First of all, is the wire carrying current, not just voltage? For example is it connected to the washing machine while it's washing or a switched-on vacuum cleaner?

Second, take a look inside a motor, and notice that the wires are wrapped around and around, and often using an iron core to increase the magnetic field. If you loop the wire connected to 220 V electricity around and around, and then switch some item on, you will get a much stronger magnetic field. However please note that can be a little dangerous if you wrap it too many times. It's better to use low voltages for this experiment.

Third, of course I don't know the sensitivity of your detector.

As other answers established, there IS a 50Hz or 60Hz alternating field, though it is usually not very strong due to parallel wires resulting in small loop areas and cancelling.

However, anyone who designs a device that is supposed to be sensitive to magnetic fields knows about this (or will quickly be reminded while testing the prototype), and will implement some kind of lowpass or bandstop filter dealing with interference at 50Hz, 60Hz and the harmonics. In some cases, a slow sensor will in itself act as a lowpass filter, though relying on it can be bad design: If a fast alternating field will not register much on an instrument but can still saturate the sensor or circuitry downwind of it, your measurement will be compromised.

There are two wires and both carry the current in opposite direction and cancel out each other magnetic field.for detection of field you have to either check it for very short distance or remove one wire

Not the answer you're looking for? Browse other questions tagged electromagnetism electricity magnetic-fields or ask your own question.

85
If you are vacuuming your carpet and you wrap the cord around your body do you become a magnet?