According to the inflationary paradigm, the exponential growth of the scale factor during inflation caused quantum fluctuations of the inflaton field to be stretched to macroscopic scales, and, upon leaving the horizon, to "freeze in". At the later stages of radiation- and matter-domination, these fluctuations re-entered the horizon, and thus set the initial conditions for structure formation.

$\bullet$ What are these (length) scales that we often talk about? Do we mean the wavelength of some Fourier modes of something?

$\bullet$ If yes, do we mean the Fourier modes of the density fluctuations $\frac{\delta\rho}{\rho}$ or that of the inflaton field fluctuation $\delta\phi(\textbf{x},t)$ itself?

$\bullet$ Why should these scales leave or re-enter the horizon?

$\bullet$ What is (are) the observable effect(s) of these scales?

$\bullet$ How do we distinguish between the roles of those length scales which first left and then re-entered the horizon with those which always remained inside the horizon and never left it?

I would like to understand both the mathematical meaning of what do we mean by these scales and a pictorial understanding. I apologize since these questions may be too naive for the specialists. After @bapowell gave his first answer, I added the fifth, closely related question as the last bullet point.

$\bullet$ What are these (length) scales that we often talk about? Do we mean the wavelength of some Fourier modes of something?

Yes, these are the comoving wavelengths of Fourier modes (see next)

$\bullet$ If yes, do we mean the Fourier modes of the density fluctuations $\delta\rho/\rho$ or that of the inflaton field fluctuation $\delta\phi(\textbf{x},t)$ itself?

These are essentially one in the same: fluctuations of the inflaton field gives rise to curvature perturbations which manifest as density perturbations after inflation ends.

$\bullet$ Why should these scales leave or re-enter the horizon?

Here's a picture of how this happens during inflation:

$\bullet$ What is (are) the observable effect(s) of these scales?

These redshifted fluctuations give rise the well-known temperature anisotropies observed in the CMB. They eventually grow to form the large scale structure we see around us in the universe: galaxies, galaxy clusters, and so on.

It's really just a matter of scale. Perhaps this graphic will help: 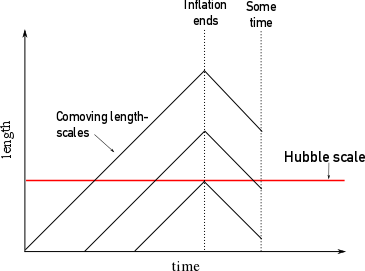 Now, there is an important difference between the 'always subhorizon' and 'once superhorizon' modes in terms of the matter perturbations that they source. Superhorizon modes undergo a 'classical-to-quantum' transition, where they are manifested as curvature perturbations. As they re-enter the horizon, they source acoustic oscillations in the post-inflationary plasma; those that enter earliest oscillate for longer and so damp the most by the time the CMB is generated at recombination. So, the longest-wavelength modes are most evident in the temperature spectrum of the CMB (these are the large, broad peaks in the correlation spectrum).

Modes that never leave the horizon are in some sense "not real" because they never undergo the classical-to-quantum transition. They don't ever become bonafide curavture perturbations. Phenomenologically, this theoretical distinction is irrelevant, though, since any perturbations generated by such small wavelength modes would be damped out by recombination.

Not the answer you're looking for? Browse other questions tagged cosmology cosmological-inflation or ask your own question.

1
Structure formation: growth of density perturbations in sub-horizon vs super-horizon scales
0
In cosmology, what is meant by a 'scale', e.g. 'scales smaller than the horizon'?
3
Reheating and the Horizon Problem
1
Difference between causal horizon and particle horizon
0
Meaning of “observable scales” in cosmology
1
Why can't primordial fluctuations be super-“horizon” without inflation?