Sorry for my bad English, seemly, I did not make it clear. In fact , I don't care what is wave or particle and how to let wave become particle. I care about how wave become particle. In fact, as my intuition, differet things can't natural transition, some time, particle is wave, some time, wave is particle, it means they are one thing. The wave and particle just like two sides of coin. Now, what is the coin (I don't want a really thing, just a mathematic description/model)? And, when two coin interact, how the coin overturn (there should be a PDE describ it )?

Thanks, it is hard to describ my question, if there are any doubt, tell me. 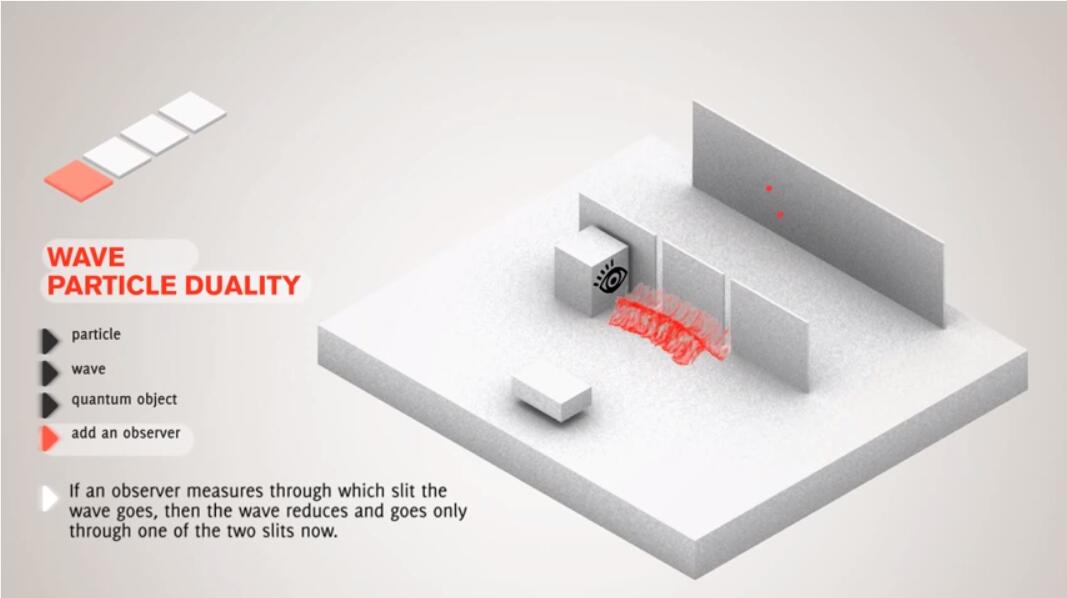 This can be explained on the basis of dual nature of matter...

WAVE AND PARTICLE DUALITY OF MATTER :-

The concept of wave nature of matter arose from the dual character of radiations which sometimes behaves as a wave and at other time as a particle.

For example :- Radiation is considered as a wave in propagation experiments based on interference, diffraction and polarisation. These experiments prove the wave nature of radiations because they require two waves at the same position at the same time. On the other hand it is impossible for two particles to occupy the same position at same time. Radiations is considered as particle in interaction experiments like Photoelectric Effect and Compton Effect. In these experiments Radiation in the form of particle (i.e. photon) interacts with matter. However, radiations can't exhibit both particle and wave properties simultaneously. This dual nature of Radiation was not accepted because of the contradictory aspects of two nature.

1. A wave spreads out and occupies a relatively large region of space.

2. A particle occupies a definite position in the space and hence occupies very small region of space.

According to DE-BROGLIE matter has dual ( particle as well as wave like) characteristic just like radiations. His hypothesis about the dual nature of matter was based on the following observations :-

(a) The whole universe is composed of matter and electromagnetic radiations.

(b) The nature loves symmetry. As the radiations has dual nature, matter also posses dual nature.

Consider a photon whose energy is given by

If a photon possesses mass (which is only by virtue of its motion i.e. it's rest mass us zero), then according to theory of relativity, it's energy is given by

If instead of photon we consider a material particle of mass m moving with velocity $\nu$ ,then momentum of particle, $$p=m\nu$$

Therefore, the wave associated with this moving particle is given by

There is also a experimental verification of DE-BROGLIE hypothesis that a moving particle has a wave property associated with it. This experiment namely called Davisson and Germer Experiment.

The electron waves suggested by de-Broglie were first detected by Davisson and Germer were studying the reflection of electrons from a nickel target and accidentally subjected the target to such heat treatment that it was transformed into a large group of crystals because of which the reflection becomes anomalous i.e.maxima and minima appeared. They got an idea that this anomalous behaviour may be because of X-ray diffraction, suggesting thereby that electrons do behave like waves. To verify this fact, they prepared a target consisting of a single crystal of nickel. 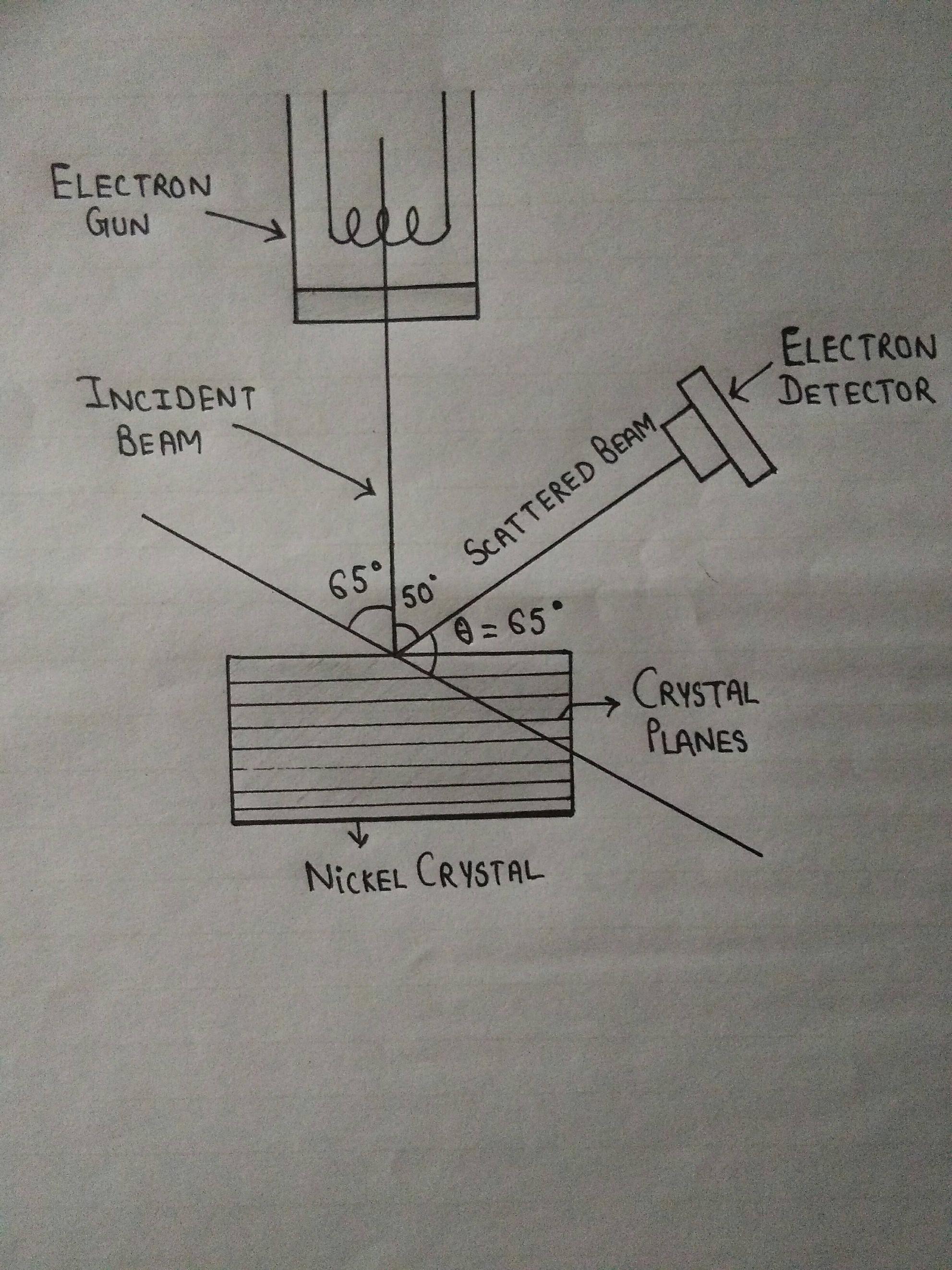 The electron beam is produced by the electron gun. It contains a filament which is heated to dull-red, electrons are emitted by thermonic emission. These electrons are accerlated and the resulting beam is allowed to fall on a large single crystal of nickel. The electrons are scattered from the crystals in the different directions, the angular distribution being measured by electron detector.

Now, according to Bragg's Law, for maxima in the diffraction pattern

Assuming n=1, the de-Broglie wavelength of diffracted electron is

Now, for 54 volt electrons, the de-Broglie wavelength is given by

This, two results are in excellent agreement with each other. Hence, Davisson-Germer experiment provides direct verification of DE-BROGLIE hypothesis of the wave nature of moving particle.

The idea of wave-particle duality is fundamental to modern quantum mechanics. Though there is not an agreed upon interpretation of what exactly this means physically (see any source on Interpretations of Quantum Mechanics for more), it is well agreed upon that the theory works well to model real problems. This phenomena has been observed on scales ranging from fundamental particles to molecules, but not for macroscopic objects due to the very short wavelengths you would need to measure.

Now consider how this fits into QM formalism. Under the Copenhagen interpretation of QM (one of the more common ones), it is the act of measurement that collapses the wave function into a single, measurable, value. So prior to measuring, even if I know the wave function, I can at best predict the probability with which I find an object at a given value.

However, once I measure the property of the object (ie momentum, position...), I get a value and the object now behaves like a particle (ie if I had measured position it now has an actual location in space that I measured) whereas before it behaved like a wave with probability of having a variety of measured values.

If you want an overview of how the Copenhagen interpretation treats measurement in the context of wave mechanics, I suggest Griffiths Intro to Quantum Mechanics, it will help you get a better feel for how measurement works in the Quantum world.

All these phenomena are observed due to probabilistic nature of the quantum mechanics. I will try to explain it in simple terms.

If you consider a particle in the free particle (without any potential barriers), quantum mechanically it can exist in any position in the space. We only know the probability function (which is uniform continuous like a wave)which gives us the probability of the particle being in different positions.

Immediate after measurement, the particle again evolve according to Schrodinger equation which changes delta probability function to a uniform distribution. That's why you see wave after it is measured.

You can also learn how measurement in quantum systems can affect its quantum nature by referring to Schrodinger's cat phenomena.

Not the answer you're looking for? Browse other questions tagged wave-particle-duality or ask your own question.

6
What does it mean (how is it visualized) for a particle to act as a wave?
1
Relation/meaning between momentum and contours of constant equal phase of a wave function
1
Why complex functions for explaining wave particle duality?
4
Photons to Represent a Wave
2
Why does a real/virtual photon interact only with charged particle?
3
Is the Uncertainty Principle a logical consequence from the Wave-Particle duality?
2
Wave particle duality/double slit experiment
0
Is electron/photon wave or particle in Feynman sum over histories formulation?
0
Higgs Mechanism and Wave-Particle Duality