I'm not quite sure how keep track of physical units when differentiaion is involved. I find it important to keep track of units because I want to be able to check the units afterwards.

I will discuss a specific case, to illustrate my confusion with regards to the units.

It can be shown that $s$ is given by

In another case, say, we want to know the impulse response function $h = h(t)$; i.e. the voltage $V_{out}$ that we measure over the capacitor if we hook up an impulse input voltage $V_{in}(t) = \delta(t)$, where $\delta$ is the Dirac delta function.

It can be shown that $h$ is given by the derivative of the step response $s$:

How on earth would I be able to use dimensional analysis in this case to check my results?

In the last expression $\delta(t)$ should now be in units volts per time for the equation to hold.

Your understanding of the step response function is pretty flawed, though it's hard to pin down exactly how as you've not given a formal definition for what you're using.

To start with, the formula you've given is completely wrong, as it produces a discontinuous output, i.e. if you plot $(1-e^{-t}\theta(t))$ what you get is this: 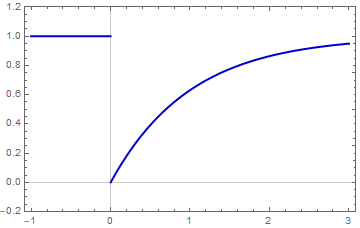 This makes it pretty clear that the correct form for the response function should be $$ s(t) = \mathrm{const}\times (1-e^{-t/RC})\theta(t), $$ with the theta function as a global multiplier to make everything vanish before the voltage ramps up.

Now, as to the value of the constant, that's really up to how you define it, but there's really no reasonable understanding under which that constant should equal $RC$. You say that "it can be shown" that that is the correct form, but you don't give any details that would enable us to help you pinpoint where the mistake is inside your derivation, but it's simply not a workable relation.

Instead, you have two different options for the normalization of the step response function

Generally speaking, since the response function is best thought of as a property of the system, to be used in a convolution (or other similar mathematical device) with the actual driving voltage applied to the system, it is normally better to use the second understanding, and to include the units of volts on the actual physical driver and the actual physical response, while leaving the system's response unit-neutral.

And finally, just to emphasize this: the number $1$ is always dimensionless, as is $\theta(t)$. If your formalism indicates that that's not the case, then you're doing things wrong: there's no such thing as "one, but with units of volts", there's only "you had a constant $V_0 = 1\:\rm V$ and you were sloppy with your constants", which you should never do.

There is a nice tutorial explaining how to obtain the voltage step-response of the system here.

Not the answer you're looking for? Browse other questions tagged units dimensional-analysis or ask your own question.

15
units and nature
2
How to interpret the appearance of time units in the units of a physical quantity?
7
What are units actually?
32
What do units like joule * seconds imply?
5
Units inside a logarithm
3
When can two quantities be added together?
179
Are units of angle really dimensionless?
2
Do we cancel units on division?
1
Units for dimensionless quantities
1
Convert SI units into natural units