Why does the friction force on a smoothly rolling wheel cause the centre of mass to accelerate?

I don't understand how the friction force is transmitted from the bottom of the wheel to the centre of mass.

It's because the wheel is rigid and forces at any point on the object are distributed through to other portions of the object.

For linear momentum problems on rigid bodies, $F_{net} = ma$. The location where the force is applied does not matter.

The force does not act at two different points, but it can certainly have two different effects (changing the linear momentum of the object and simultaneously applying a torque to the object).

A bigger wheel (larger radius) will accelerate slower than a smaller wheel of the same mass and a lighter wheel will accelerate slower than a heavier wheel with the same radius. The location of the wheel’s mass is also important when determining the wheel’s acceleration. A “hoop” in which all the mass is concentrated around the perimeter will have a lower acceleration than a solid wheel of the same mass and radius:

If you can imagine swinging a baseball bat with all of the weight at the far end vs one with the same mass that has the weight concentrated near your hands you can understand how the distribution of mass makes a difference.

You are right on the point that friction cannot act on both centre of mass and point of contact at the same time.If we try to solve the problem by using newton's second law at the point of application of friction, the problem would turn out to be very complicated.

It's our own way of simplifying the problem...

For example,you may have seen problems like the one below ,a lot of times.The tension due to the string is acting on the edge of the block ,but we assume the force to be acting on the center of mass of the block.It's the same analogy. 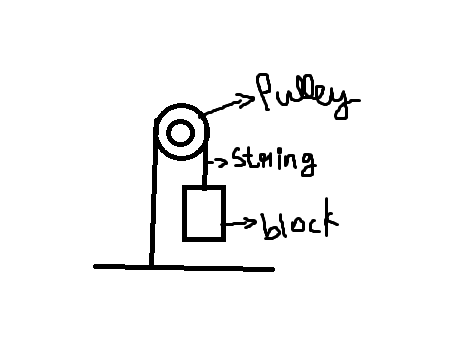 This way of solving problems can be used only for rigid bodies.For no-rigid bodies mass is not always concentrated at center of mass.

2
Does friction act on a wheel rolling at a constant speed
2
Consistent method for finding direction of static friction
3
Rolling resistance and friction force in FBDs
10
Does rolling friction increase speed of a wheel?
2
Why does friction not accelerate a wheel?
0
Where does the equivalent friction act on a block sliding on an incline?
2
Rolling of an object down a slope
9
Why do wheels roll if the force of friction does not depend on surface area?