Using a pulley system as a plant dryness scale/indicator

I have a hanging potted plant for which it is difficult to check the moisture level. I want to use a pulley system to create a sort of "scale" which gives a visual indication of the relative dryness of the plant.

My main concern is about friction -- is the difference between a wet/dry plant enough to overcome the static friction? I am keeping my eyes on the situation, but it hasn't moved yet.

For instance, a gun tackle has an advantage of 2. It seems that I could use this to double the mass of the counterweight. Am I correct in thinking that more weight in the system will make it easier to overcome static friction?

Alternatively, it could be set up the opposite way where the counterweight is half the mass of the plant. This would magnify vertical movement of the plant by 2x, possibly leading to more prominent visual feedback. Yet the system becomes lighter, which seems like it would hinder its ability to overcome friction.

Does any of this make sense and is there some better method?

The one other I was thinking of was to just go with a lever which seems like it would be more sensitive (but more boring) while using a smaller counterweight, e.g.:

And here's a photo of the current setup for illustration: 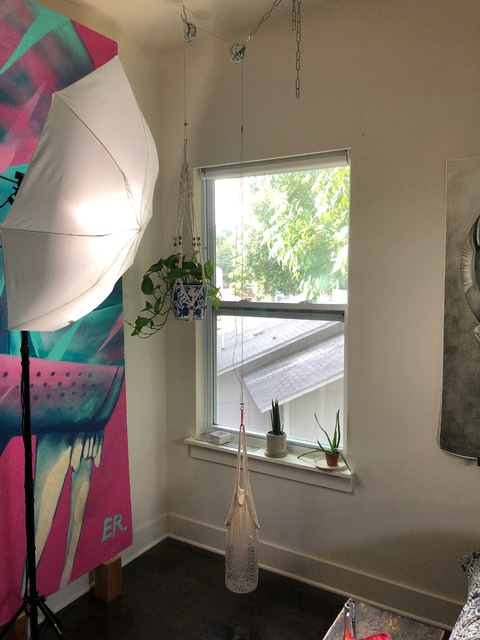 The difference between moving reliably in one direction vs. the other is approximately 150g.

The pot holds approximately 2L of soil. A quick search suggests a normal watering might be around 20% of the soil by volume. It's possible a pot without drainage needs less, say 10%. That would be a delta of about 200g, enough to move in either direction confidently.

However, after removing the extra weight (all on the plant side), it gently slid up until the counterweight touched the ground. It had been at rest for a few days. I guess this means static friction increased over time until playing with it loosened it up.

The issue is sensitivity, and that relates to friction. The block and tackle will increase friction, because there are additional points of contact.

Slipperier more flexible rope. Smoother bearings. Try the pully with weights on either side, and add coins or whatever increments you have until it moves.

Or, some kind of spring. You could have a platform as limiter to stop it over stretching the spring when fully watered. Tricky to get right spring..

You might be better putting your ingenuity into irrigation..

The issue with your current pulley setup is that it will start moving (and once started, will keep moving until the bottle touches the floor) as soon as the weight of the lost water exceeds the static friction.

So, basically, you rely on the friction (and nothing else) as your reference, which is not the best idea. For instance, if you perfect such system and make the friction very low, you may have hard time even balancing it in the first place and it would move after a minuscule amount of water evaporates.

Alternatively, you can make the bottle a little lighter than the watered plant and have the plant initially rest on the floor with the bottle up in the air, a couple of inches above the floor. When enough water is lost, the plant would move up and the bottle would land on the floor. In this system, you use the weight of the bottle as your reference, which is easier to control, and reducing the friction will reduce the error.

You can view this system as an analog of an electronic comparator, with the weight of the bottle serving as the reference voltage and the static friction playing the role of the hysteresis.

If you use the same approach with the lever system, the friction (error) will be lower, but the exact placement of the plant and the bottle on the arms of the lever would be critical.

Not the answer you're looking for? Browse other questions tagged newtonian-mechanics forces newtonian-gravity friction work or ask your own question.

1
Two problems with free body diagrams. Contradictions (solutions are provided)
4
Blocks stacked on an incline connected by rope around pulley
1
Moving wedge and pulley system
1
Equilibrium when it shouldn't be?
0
Finding the acceleration of a mass/pulley system without knowing the direction of the displacement
2
Is there a way to determine the exact value of static friction in this situation?
1
Coefficient of friction in pulley system