What determines the surface temperature of the sun?

The core temperature of the sun is on the order of 15 million degrees kelvin while its surface temperature is around 6000k.

What are the main factors which determine the surface temperature of the sun?

For example, would it change significantly if the core temperature increased. Such as if gravity were stronger or the speed of light were faster (since E=mc2, thus the fusion process would be hotter) or perhaps it would just expand in size and keep the same surface temperature.

So for instance, what would a ten-fold increase in the speed of light change the surface temperature of the sun?

This formula suggests that all things remaining equal, a higher luminosity would increase the temperature rather mildly while making the sun smaller would have a bigger effect. However, as the question indicates, luminosity and radius are not independent. If the energy production increases the star would tend to become larger because of a higher central pressure. But obviously there is a bit more complexity to how hydrostatic equilibrium interacts with the nuclear reaction rate and the energy flow.

What determines the surface temperature of the sun?

Mass and age play the biggest role in determining the temperature of a main-sequence star like our sun, with chemical composition playing a minor role.

The tight interrelation of temperature, pressure, mass, and rate of nuclear burning means that a star of a given mass and age can only achieve hydrostatic equilibrium at one set of values. That is, every star in our galaxy of the same mass and age as the Sun also has the same diameter, temperature, and energy output. There is no other way for everything to balance. If one generates a very hard-core astrophysics graph known as a Hertzsprung-Russell Diagram (H-R diagram for short), the relationship between a star's mass and its other properties becomes more clear. Luminosity is connected with the radius (because it depends on the irradiating surface), while the temperature is connected with the mass (the more is the mass, the more is the pressure at the center of the star).

This shows how our sun entered the main sequence: 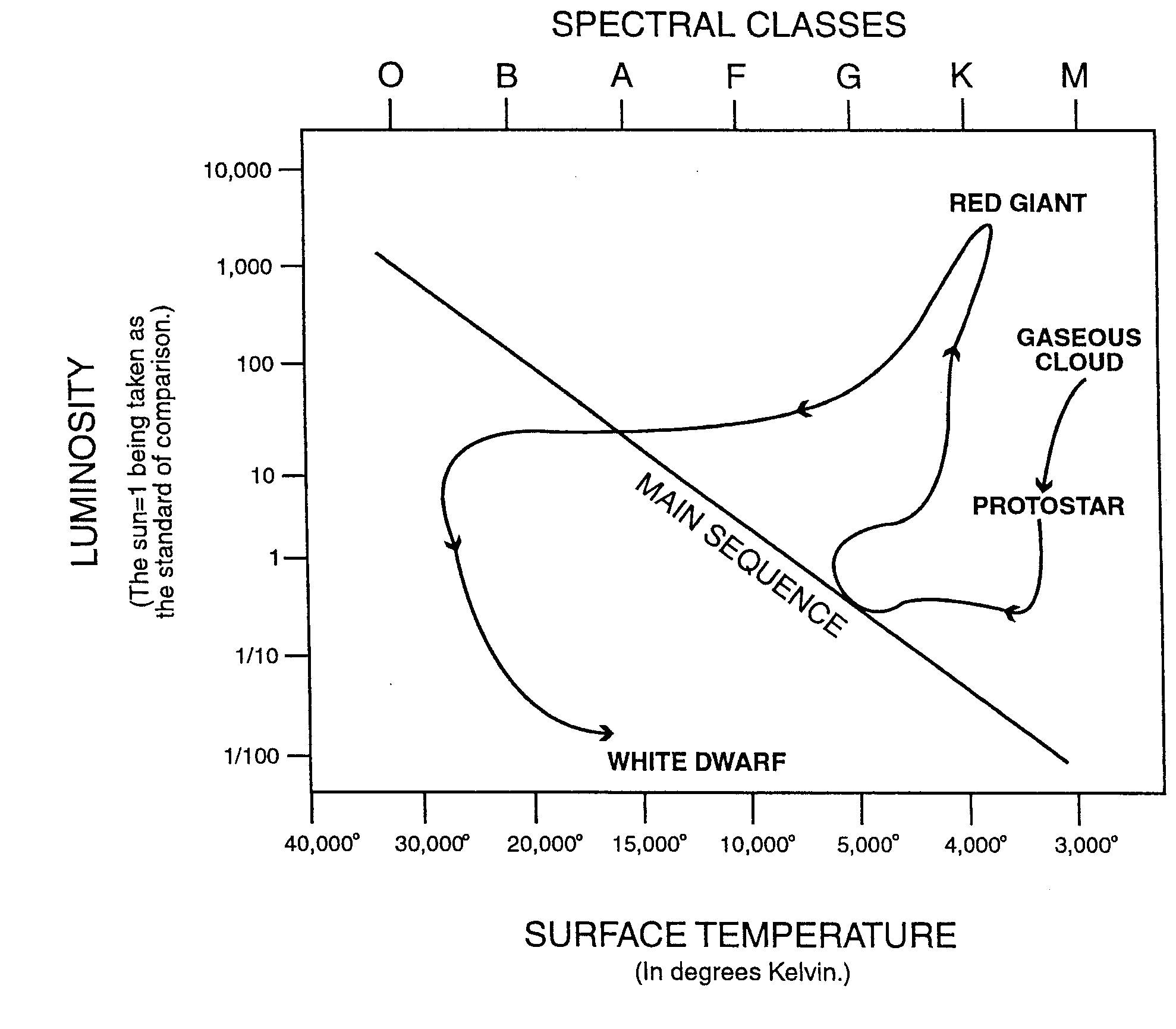 An H-R diagram is shown below:

Check out the HR Explorer where you can move the star to obtain new mass, luminosity, radius and temperature calculations. Wikipedia's mass–luminosity relation and Stefan–Boltzmann law webpages can be consulted for the calculations. The Australia Telescope National Facility webpage: The Hertzsprung-Russell Diagram also explains the graphic.

All stars spend the majority of their existence as main sequence stars, fueled primarily by the nuclear fusion of hydrogen into helium within their cores. However, stars of different masses have markedly different properties at various stages of their development. The ultimate fate of more massive stars differs from that of less massive stars, as do their luminosities and the impact they have on their environment. Accordingly, astronomers often group stars by their mass:[61]

How stars are created and evolve over their lifetime is explained on Wikipedia's stellar evolution webpage. Low mass and high mass star formation is thought to occur by different mechanisms, see the prior two links for more in-depth information. The formation of low-mass stars, like our sun, is by the gravitational collapse of rotating density enhancements within molecular clouds.

The compression caused by the collapse raises the temperature until thermonuclear fusion occurs at the center of the star, at which point the collapse gradually comes to a halt as the outward thermal pressure balances the gravitational forces. The star then exists in a state of dynamic equilibrium. Once all its energy sources are exhausted, a star will again collapse until it reaches a new equilibrium state.

The initial composition of the molecular cloud determines the nature of the nuclear fusion reaction: it's temperature, size, and density at which the fusion starts. This is, for the layperson, somewhat analogous to the lower flammability limit or flash point, but that describes a chemical reaction.

The requirements for nuclear fusion are quite different. A substantial energy barrier of electrostatic forces must be overcome before fusion can occur. At large distances, two naked nuclei repel one another because of the repulsive electrostatic force between their positively charged protons. If two nuclei can be brought close enough together, however, the electrostatic repulsion can be overcome by the quantum effect in which nuclei can tunnel through coulomb forces.

To overcome this barrier, nuclei have to collide at high velocities, so their kinetic energies drive them close enough for the strong interaction to take place and bind them together.

According to the kinetic theory of gases, the temperature of a gas is just a measure of the average kinetic energy of the particles in that gas. For classical ideal gases the velocity distribution of the gas particles is given by Maxwell Boltzmann. From this distribution, the fraction of particles with a velocity high enough to overcome the Coulomb barrier can be determined.

In practice, temperatures needed to overcome the Coulomb barrier turn out to be smaller than expected due to quantum-mechanical tunnelling, as established by Gamow. The consideration of barrier-penetration through tunnelling and the speed distribution gives rise to a limited range of conditions where the fusion can take place, known as the Gamow window.

In physics of stars, their workings and their evolution, is a goldmine of problems in statistical mechanics and thermodynamics. We discuss many examples that illustrate the possibility of deepening student’s knowledge of statistical mechanics by an introductory study of stars. The matter constituting the various stellar objects provides examples of equations of state for classical or quantal and relativistic or non-relativistic gases. Maximum entropy can be used to characterize thermodynamic and gravitational equilibrium which determines the structure of stars and predicts their instability above a certain mass. Contraction accompanying radiation induces either heating or cooling, which explains the formation of stars above a minimum mass. The characteristics of the emitted light are understood from black-body radiation and more precisely from the Boltzmann-Lorentz kinetic equation for photons. The luminosity is governed by the transport of heat by photons from the center to the surface. Heat production by thermonuclear fusion is determined by microscopic balance equations. The stability of the steady state of stars is controlled by the interplay of thermodynamics and gravitation.

For a shorter and more approachable explanation see: "Giant molecular clouds: star factories of the galaxy" (9 Oct 2013), by Clare Dobbs.

For example, would it change significantly if the core temperature increased. Such as if gravity were stronger or the speed of light were faster (since $E=mc^2$, thus the fusion process would be hotter) or perhaps it would just expand in size and keep the same surface temperature.

As explained above: The tight interrelation of temperature, pressure, mass, and rate of nuclear burning means that a star of a given mass and age can only achieve hydrostatic equilibrium at one set of values. The star will increase it's burning rate or shed excess matter to rebalance itself.

So for instance, what would a ten-fold increase in the speed of light change the surface temperature of the sun?

There are no links for that since such an increase is not possible. You might want to play with the HR Explorer linked above, you could also multiply $c$ by 10 in the above equations linked to; the equations and their results are not expected to be valid under those conditions.

Not the answer you're looking for? Browse other questions tagged astrophysics temperature sun stars or ask your own question.