Why can waves (audio, eletromagnetic, etc.) be represented by a circle?

I found an intuitive reason for the sine function, but want one that can be used for all kinds of waves. I've found a good explanation summarized in the following figure:

It is logical because a circle is symmetric and starts to change in height fast near the x axis, but gets slow near the y axis. But intuitively, why is it just a circle?

where $k$ is positive. This kind of system is found very commonly in nature, because it's a linear approximation for a ton of other systems (which are generally more complicated, but we can usually ignore the details if we disturb the system gently enough). Basically anything that moves back and forth in a potential well will eventually be describable by sinusoidal motion, for small enough oscillations.

Sine and cosine functions are also the solution to a particular partial differential equation called the wave equation:

This describes the motion of traveling waves on a string or another continuous body. This equation is, again, very common in nature, because it's also a simple approximation of lots of more complex behaviors in the limit of small disturbances.

There are also many other differential equations that have sine and cosine functions as the solution, but even with these examples, it shouldn't be surprising that we see sine and cosine everywhere.

On a more technical level, sine and cosine functions are also useful because they form a basis of the space of sufficiently smooth periodic functions. It's a mathematical fact that any repeating signal or pattern can be decomposed into a sum of a bunch of sine and cosine waves, as long as it doesn't include too many "jumps" (this process of decomposition is called the Fourier transform). As such, they're extremely important in the study of any kind of repeated motion, because oftentimes it's much easier to solve such problems after taking the Fourier transform.

On the deepest level, sine and cosine functions get all of the above properties because they are intimately related to the exponential function, through Euler's formula:

The circle is just one way to see those oscillations (the x component of a circular movement is a sinusoidal function).

Fourier analysys tells you how any shape can be achieved by summing sines and cosines.

So we want to work out with the simplest case, as the complex ones are linear combinations of these.

Thanks to QuirkyTurtle98. I should clarify that this answer does not apply to wave packets. Wave packets are composed of numerous periodic waves, but are not themselves periodic. You would not represent a wave packet as a circle.

A wave is periodic. If your system exhibits wave (or any oscillatory) behavior, it is periodic and will continuously return to the same configuration given sufficient time. So the path that your system follows in phase space is closed. That path doesn't have to be a circle, but a circle is the simplest example (any path that is not self-intersecting can be transformed into a circle).

In the specific case of the sine function depicted in your animation, you have one degree of freedom (the y axis). You get your second dimension (the x axis), and therefore a circle, by treating the velocity as an additional degree of freedom. Positive y represents the function's value being positive, and positive x represents movement in the upward direction on the graph, or a positive time derivative (positive because the second graph (depicting the sine function) has it's zero of time ($t=0$) to the right of the x axis, so that time is continuously increasing at the origin).

A wave changes as time passes. Imagine that you have many time slices, each one being just one moment. In each one the wave is slightly different. Because the wave repeats itself, every time slice will be identical to some time slice before it. Each point on the edge of a circle represents one time slice. When you move along the edge of the circle, you're moving through all the time slices, and the wave "moves" like in a flip-action animation:

Why a circle, as opposed to e.g. a square (also closed)? Imagine a loop made by tying some string. No matter what shape you twist the loop into, you can always stretch it out into a circle:

So although a wave could be represented as another shape, you can always transform that shape into a circle. It is easiest to just use a circle, though it is correct to note that you could have some waves represented by different shapes.

After much research, I found a posted answer that does not depend on such arbitrary facts as assuming Hooke's law is true.

Suppose Energy(E) as a continuous function of displacement (y)

$\color{blue}{E(0)}$ is a constant which depends on reference. It can be considered as $\color{blue}{0}$ and selected as, for instance, the position of the tip of a stretched spring, when the movement changes direction. This is a characteristic of any type of oscillatory movement.

$\color{blue}{E\,'(0)}$ is $\color{blue}{0}$. Reversing the direction of motion in a continuous function means that the first derivative is null in the reference point. Non-oscillatory movements are not included in that reasoning.

This is the formula of the potential energy of a spring, when someone pull a spring and hold it. Now we can derive it in relation to x (Energy = Force * Distance):

As the force acts for something to return to a stable position, the constant $k$ shoud be preceded by a - signal.

The most general solution of the above differential equation where the second derivative is the function itself, with the changed signal corresponds to:

There are 2 different constants because are 2 freedom degrees in double derivation.

For instance, if one derives the first solution twice, one gets

That can be rewritten as

Remembering that it is indifferent to use sine or cosine because

To visualize better, if we imagine this function as expressing the vertical oscillation of an longitudinal oscillatory motion. Let's consider $\color{blue}{\Phi = 0}$ so $\color{blue}{y(t) = A\,sin(\omega t)}$. 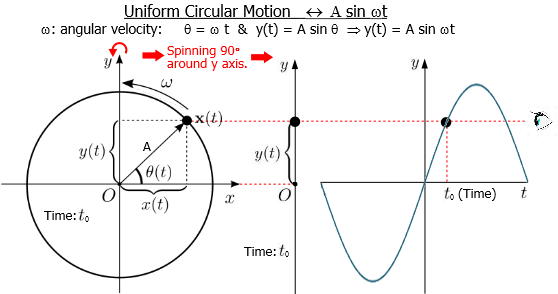 Any above expression represents simple harmonic motion (SHM), that can be displayed as circular movement with constant angular speed. Over time, the amplitude draws a sine graphics.

Here's a differential-equations-free perspective. Linear nondispersive waves are superpositions of moving profiles which are undeformed as time goes on. To be precise, in one dimension they are functions $$f(x - v t)$$ where $v$ is the wave speed. Any such function may be considered a collection of ``moving point masses" $\delta(x-vt+\phi)$ where $\phi$ is a constant phase shift.

If the profile $f$ is periodic, meaning that $x \mapsto x + \lambda$ is a symmetry of $f(x-vt)$, then our point masses are collected into families $$\sum_{n \in \mathbb{Z}} \delta(x - vt + n\lambda + \phi)$$ which all have the same weight in $f$. Using the method of images, this is equivalently a single particle moving at a constant speed around a circle.

So it doesn't really have anything to do with the motion, just the relationship between periodic functions and the circle.

Not the answer you're looking for? Browse other questions tagged waves harmonic-oscillator or ask your own question.

23
Why can a wave be expressed with a sine function?
13
Can Hooke's law be derived?
0
How to visualize the angular frequency in SHM?

5
Why are AC quantities represented by sine waves always?
2
Can we represent Simple Harmonic function as triangular waves?
3
How does a non-diffracting beam form from a converging ring of illumination?
0
Why do standing waves only occur in some specific conditions?
8
Intuitive Cause for End Corrections
3
Why and how are wave sets (groups) created?
1
Why does wave keep on travelling despite destructive interference?
5
Is this a possible derivation of the electromagnetic wave equation?