Please help me to clarify situation with shape of electromagnetic waves.

EDIT: From comments I see root of problem. I afraid I'm no so smart as all of you so I simply don't get what you talking about all these waveguides, near / far fields and other similar things. Unfortunately I don't know any of calculus also. Beside that I feel some language barier, so I rephrase my questions to be more specific trying to express what I exactly can't understand. And I would prefer answers in simple non-math terms.

EDIT2: I would like to thank you all for the answers and comments, they were very useful. At least I feel I've got some basic understanding.

Here is a 3D animation of single pulse. 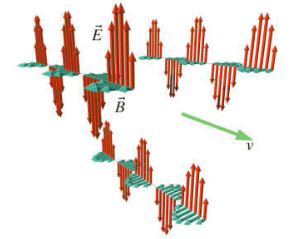 I can't understand why $\vec{E}$ and $\vec{B}$ fields are take such orthogonal form and how it can satisfy Maxwell's equations and in particular Faraday's law.

There is usually mathematical proof in textbooks why it so with explanation considering some region of space in which such wave are exists. And I'm lost in this point.

Because I thought induced electric fields in case of time-varying magnetic fields looks like this: 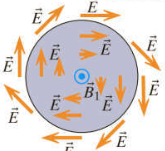 Ok, maybe they not always take form of circles but at least loops are always closed.

Now, as for me, in case of EM wave we got same situation and here is part of explanation confirming this:

...With the right thumb pointing in the direction of -dB/dt, the fingers of the right hand curl clockwise, which is the sense of the electric field around the path. 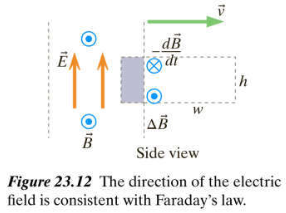 Similar time-varying magnetic field but it looks completely different. I don't see any circular fields around changing $\vec{B}$, there just vertical perpendicular $\vec{E}$ field which "moves" to the right, no horizontal or any curly components (roughly speaking it looks like electrostatic but with no any charges). At same time there also is mention about right hand "rule" in text. I must be blind or something.

And I just think that same problem with magnetic fields - they not in forms circles as well. Maybe these orthogonal propagating fields just small part of main global induced fields which forms closed loops like it should be. Don't know. Feels like I can't see the whole picture.

Is this vertical $\vec{E}$ field in wave are actually induced ?

In other words how such orthogonal constitution of fields can satisfy Faraday's Law which implies closed loops in induced $\vec{E}$ fields ?

Here is a similar question, unfortunately without satisfying answer.

Note that for an oscillating dipole:

which shows that there is a lot going on.

Note that there are different powers of $r$ in different term, which means that the field configuration looks different at different distances.

Many wavelengths away (the far-field, or radiation zone), only the smallest inverse powers of $r$ term contribute. It is here that the $E$ and $B$ fields are nice sine waves with their peaks in phase.

At smaller $r$ is the transition region, and the smallest $r$--typically within a few wavelengths--is the near field. Note that these terms pick up factors of $i$, which means the $E$ and $B$ fields can be out of phase, which is what you would expect from simple induction.

The near field depends not only on the antenna design, but also on conductors that may be in the near field. For critical applications (say a spacecraft lander leg in the near field of your terminal descent radar), you can't just imagine what is going on, and detailed calculations or measurements may be required.

The dipole formulae shown here are the simplest analytical case; however they do illustrate the origin of the differences in near are far field configurations.

You've explicitly asked for answers that are simpler than the existing ones, so let me start off with a warning: Maxwell's equations are intrinsically mathematical statements. If you want any sort of detailed understanding of how they work, or of how some specific situation relates to the Maxwell equations, then there is a point at which there is simply no other choice than sitting down, buckling up, and doing the maths. If you're unwilling or unable to do the maths, then you just need to accept that there are situations in which you will not be able to understand things to the level of detail that you might wish for. If that sounds harsh, then sorry, but that's just the way things are.

Next up, there's an important point that's often not made strongly enough: plane waves are a model and nothing more. Plane waves are a possible solution of the Maxwell equations, and nothing more: they are useful in constructing some forms of general solution to the equation, but the fact that a given set of fields (say, a plane wave) is a solution to the equations does not imply that all solutions have that form.

The reason this is important is that several of your questions have the form "why are plane waves like this?", and they are essentially, fundamentally unanswerable. The fact that plane-wave solutions have a characteristic X is an existence statement ─ "there exist plane-wave solutions of the Maxwell equations with characteristic X" ─ and not a universal statement, i.e. it does not imply that all solutions of the Maxwell equations must behave like that.

Thus, for example, the answer to

Now, as I understand your long-and-rambling post, the core of your question is basically how do plane waves satisfy the Faraday induction law?, and the answer to that can fortunately be seen graphically. The diagram you presented is nice, but the statement of the Faraday law of induction is a bit more precise: it states that for any given loop inside of which there is a changing magnetic flux, the circulation of the electric field along the loop, i.e. the integral of its components along the loop, must be nonzero. 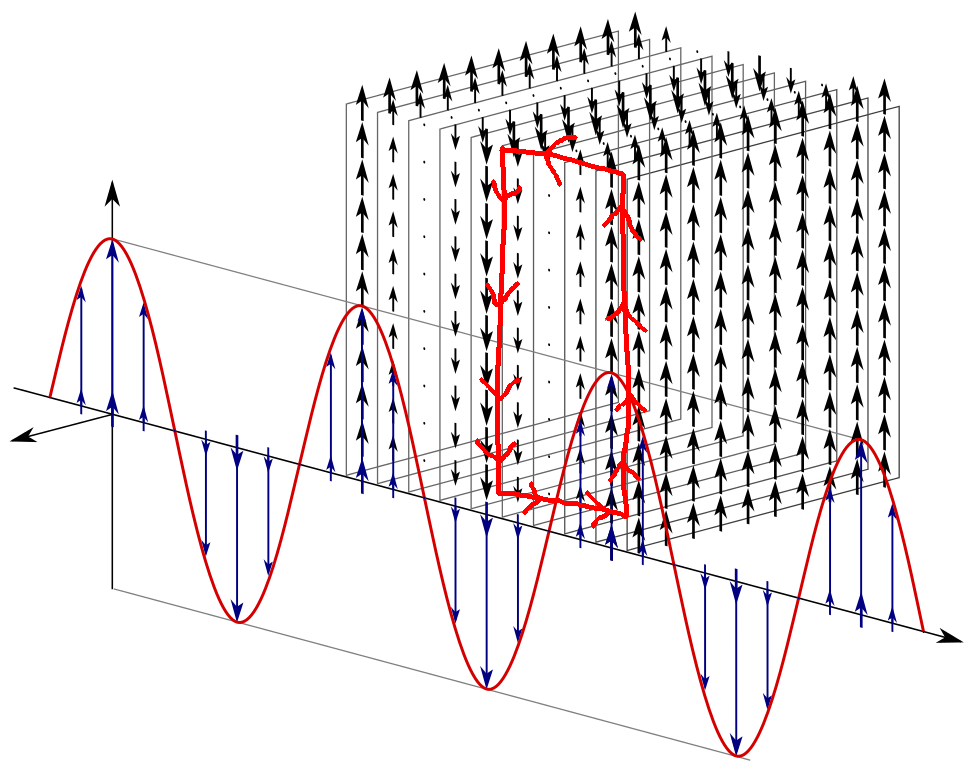 Note, in particular, that for the curve marked in red, the electric field is always along the direction of the curve, or orthogonal to it; that implies that the circulation $\oint_C \mathbf E\cdot \mathrm d\mathbf l$ is nonzero.

Now, that said, if you want any more details, then you just need to buckle up and learn the maths, or accept it as a given that plane-waves satisfy the Maxwell equations because they have a mathematical form that satisfies the mathematics of the equations.

No. Electromagnetic fields can take a multitude of different forms, and no matter how many examples you see, that still doesn't imply anything about their general behaviour, i.e. it doesn't imply for any circumstance that the EM fields "just take" this or that form.

And, as I emphasized above, the $E$-orthogonal-to-$B$ configuration does not contradict either the Ampère-Maxwell or the Faraday induction laws. Electromagnetic fields always satisfy all four of the Maxwell equations; if they don't then they're not EM fields, period.

Here is an image from a web search: 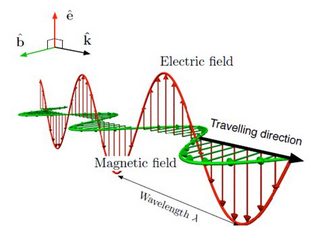 The OP diagram #1 would apply to an extremely thin parallel beam of light, where the width of the beam is nearly the same as the wavelength. A bit un-physical! Collimated parallel beams would suffer extreme diffraction effects unless the beam diameter >> wavelength. In OP diagram #1 the successive "rings" should be drawn as thin stacked pancakes or as very narrow, tall elipses, not as the circles shown.

More typical is to depict the expanding 3D ripple-pattern surrounding an atom or antenna. The pattern looks like expanding concentric balloons, with the field-lines drawn on the balloon surfaces. The balloons have large holes at their poles, through which the e-field lines can pass.

The MIT open courseware project publishes an animated diagram of the e-field propagating outwards from a small dipole antenna, below. It's the 2D section of the 3D pattern.

(Your first diagram would be an extremely narrow slice of the horizontal axis in the animation above.)

Notice the lack of actual "sine waves" in three-space diagrams. In physics textbooks, the typical EM sine-wave diagram is only depicting the E and B amplitudes, not their 3D shape. The sine wave is a plot of flux density, not a depiction of wave-shapes in space. The actual field shapes take the form of closed-loop flux lines in the shape of a bent, crushed, expanding torus in three dimensions. At a large distances from the emitter, each torus becomes squashed and stretched until it resembles an expending spherical shell with axial holes.

Imagine the layers of a concentric onion, with holes at the axis of each shell, and with the e-field flux passing through the holes and curving broadside across the sphere, like lines of longitude on a world map. In this case the world-map is a continuously-inflating balloon. Each successive concentric balloon has the polarity of its e-field flux-pattern pointing opposite to that of the previous neighbor balloon.