Equivalence principle and bending of a light ray

In some explanations of a phenomena of curved spacetime we have an example of a light ray emitted in a freely falling space ship perpendicular to the direction of a free fall. In this case, for an observer in a spaceship height at which a light ray is emitted is the same as the height at which it hits the oposite wall. For an observer that is not in a free fall but experiencing the effects of gravity, light ray must bend in order to hit that wall of a spaceship. So, my question is this, why does a light ray care at all about the state of motion of its source? Why must it obey the fact that it was made in that space ship and act like it has to hit the wall? I know that this is so, but isnt that funny? One would expect that light ray just goes in a straight line and hits the wall in some other, higher point, from the observers in a spaceship point of view. So it seems that if something happens in an inertial frame, like emission of a light ray, it is somehow bounded to be in that frame in a way. I know that we have to say: motion of that system is relative and there is no way of detecting this but there is no way of detecting this because light ray acts as bounded to that frame. Can we than say that this is the only logical conclusion that does not contradict common sense, because of course, in an inertial frame, one would expect this ray to just go in a straight line, and it does so, but than, in some other frame, same ray MUST bend in order to coincide with that place on the wall where it HAS to hit?

So, my question is this, why does a light ray care at all about the state of motion of its source? Why must it obey the fact that it was made in that space ship and act like it has to hit the wall?

Nothing in the "accelerating spaceship" example requires the light ray to be emitted by something inside the spaceship. For example, one could imagine a light ray traveling from somewhere outside the spaceship that enters a porthole on one side of the spaceship and exits out the other side. In fact, at least one textbook that I know of (Hartle's Gravity: An Introduction to Einstein's General Relativity) depicts it this way. 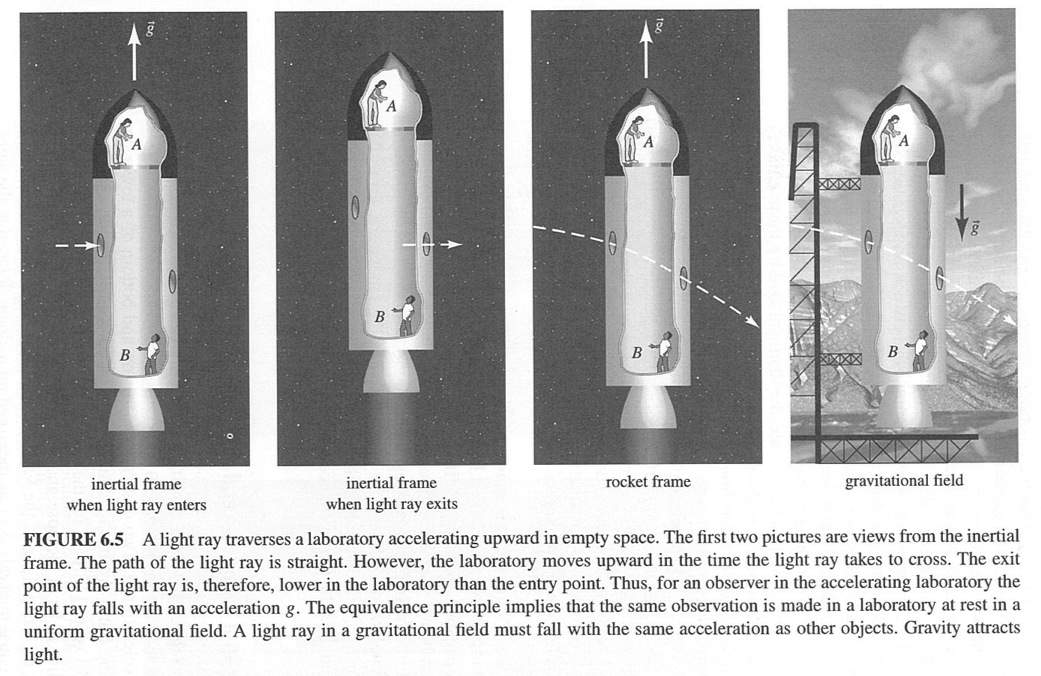 All that is required for the argument to hold is that light travels in straight lines in inertial frames; no argument about the motion of the source is necessary to conclude that the light ray will be deflected.

Not the answer you're looking for? Browse other questions tagged general-relativity visible-light inertial-frames curvature equivalence-principle or ask your own question.