Assume we want to find the speed of Robot Space Probe relative to Earth I understand that the formula must use formula (1) where $v_x$ is the speed required. This is clearly obtainable from the fact that the Earth is at rest relative to the moving spaceship and hence this reduces to a situation similar to the usual "Observer - Train" situation. This is also recognizable from the derivation where we assumed that the reference frame S' moves at speed u relative to the reference frame S. 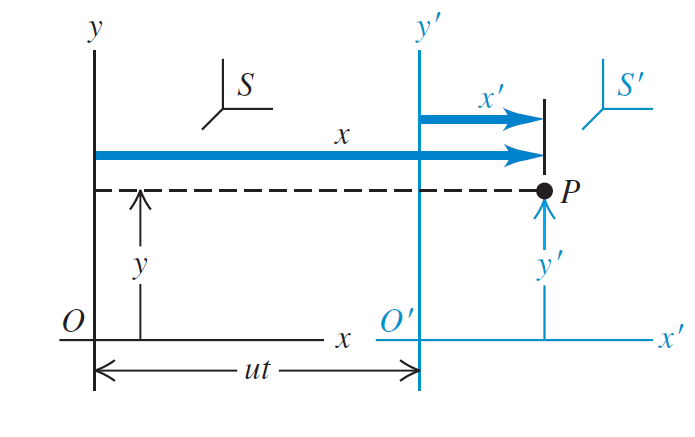 I know that the math shows that taking the wrong reference frame gives us a value of magnitude greater than the speed of light and hence we would have to take the other Lorentz Equation. However, I need to learn the concept.

HINT: The easiest way to solve this problem is to let the spaceship be in the "rest frame", and let Earth be the "moving frame". What is the velocity of the Earth relative to the "rest frame"?

As an aside, you say that:

I know that the math shows that taking the wrong reference frame gives us a value of magnitude greater than the speed of light and hence we would have to take the other Lorentz Equation.

First, I recommend using the symbol $v$ to be the relative velocity of the two reference frames, i.e., the primed inertial reference frame (IRF) has velocity $v$ relative to the unprimed IRF. Note that $|v| < c$ (there are no IRFs with relative speed $c$)

Then, by the relativistic velocity addition formula,

so your 2nd equation has a sign error is correct.

However, assume that we have to find the speed of the Scoutship relative to the Spaceship what Lorentz Transform Equation should we use?

Thus, we can use the 2nd equation above to find the velocity $\nu'$ of the scoutship relative to the spaceship:

However, you could have used the first equation by choosing the spaceship to be the unprimed IRF. I will leave that as an exercise for the interested reader.

Not the answer you're looking for? Browse other questions tagged special-relativity spacetime velocity coordinate-systems inertial-frames or ask your own question.