Momentum of light in anisotropic media

This question is related to the Abraham-Minkowski controversy that has already been discussed extensively here and in the research community. But I want to ask about an aspect of this momentum controversy that I could not find in literature: There are two common expressions to calculate momentum of light:

For an anisotropic medium with \begin{equation} \vec D = \epsilon_0 \hat \epsilon_r \vec E \end{equation} with $\hat \epsilon_r$ being a tensor with three different entries on the diagonal, $\vec D$ and $\vec E$ do obviously not point in the same direction, so $\vec k$ and $\vec S$ also not point in the same direction. In this case, which definition of momentum has to be used and why?

"In this case, which definition of momentum has to be used..."

The momentum density (momentum transferred per unit time per unit area) associated with the fields will be described by the Poynting vector. An expression similar to that which you give for $p_2$:

The $\vec{k}$ vector just indicates the spatial dependence of the phase of the travelling wave. On the other hand, the Poynting vector indicates where the energy density of the wave is moving, in other words, the direction in which the "amplitude" of the wave is propagating to.

Thinking of an individual photon, the Poynting vector gives a measure of the instantaneous group velocity of the wave-packet's wavefunction, something which can be directly related to the momentum of the photon.

An example that illustrates this in an anisotropic medium!: Let us think of a photon that travels through a birrefringent medium as shown in (Fig. 6.2. (b)): the $\vec{k}$ vector never changes (ie. always points to the right), as the wave fronts are always parallel to the material's walls. Nonetheless, the photon exits this anisotropic material at a different vertical position: it must have had vertical momentum while it propagated through the medium, as indicated by $\vec S$. 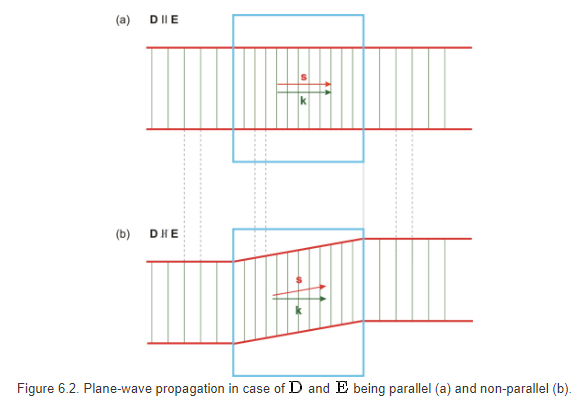 Sidenote: there is an additional co-travelling momentum due to the electrons rearranging themselves in the medium in response to the travelling wave. This is named the Minkowski momentum and is described by something similar to the expression you give for $p_1$.

Not the answer you're looking for? Browse other questions tagged electromagnetism momentum or ask your own question.