Spontaneous collapse of the universal wavefunction

How did the Hatley-Hawking wavefunction of the whole universe, as defined on the minisuperspace of all possible homogeneous and isotropic three geometries and matter fields, experience a collapse, giving rise to the classical universe we observe?

Specifically, if you take the whole universe as the system, then by definition there can be no outside 'observer' who can interact with the system and lead to it's collapse. Does this mean we should switch to the concept of spontaneous collapse(collapse without an 'observer'), e.g. GRW or CSL collapse models?

If we agree that a quantum system can spontaneously collapse, we still have a problem. The known formulation of quantum mechanics(even the spontaneous collpase models) assumes a preexisting classical spacetime; for instance in the spontaneous collapse models the position space wavefunction of a quantum system collapses at a particular point in 'space' at a random moment in 'time'. Then again, classical spacetime itself is encapsulated in what we call the classical 'universe'. If we agree that the wavefunction of the universe can spontaneously collapse to our classical observable universe, then exactly 'where' does in collapse into?

In particle physics , interactions are on par with observers. When two protons at the LHC hit each other, the wavefunction of the system "collapses" to one event , for example this Higgs to gamma gamma containing event 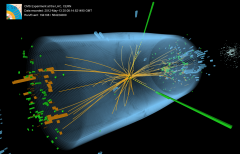 Figure 1. Event recorded with the CMS detector in 2012 at a proton-proton centre-of-mass energy of 8 TeV. The event shows characteristics expected from the decay of the SM Higgs boson to a pair of photons (dashed yellow lines and green towers). The event could also be due to known standard model background processes.

There was no observer. The single interaction in the picture is a reconstruction from a number of secondary interactions finally registered in one file and analysed with the proper programs to give the picture.

Cosmological events analogously do not need an intelligent observer to occur. It is a misunderstanding of this dubious word "collapse", which really means getting one instance from a probability distribution, in your question "wavefunction of the whole universe,", more complicated than the wavefunction for the scattering of two protons, but the principle is the same. One has to look for the effects of this particular point from the probability distributions describing it.