Electrostatic notion of voltage as it applies to circuits

I have a question that's been bothering me about electric fields, voltage, and circuit analysis.

Initially, I came to understand voltage as it was taught in the context of electrostatics - through energy analysis. The concept of the electric field as a conservative field makes a lot of sense. No matter what path a charge takes, if it travels from a positive charge to a negative charge in any way (in a dipole situation), it has the same difference in voltage, namely, the voltage between the positive and negative charge.

This concept of voltage seems to take a huge leap when we jump to considering circuits.

The terminals of a battery create an electric field, which tends to move charge carriers from the higher to the lower voltage.

But how can the circuits be of absolutely any shape? If I have an extremely long, convoluted wire, how can we analyze voltage as simply as we can? Imagine a practical situation of a lamp plugged into a wall outlet far across the room. Circuit analysis says that the wall outlet is "at 120V" (AC) and the voltage drops through all resistance in the circuit on its way back to the ground wire. I just have trouble matching up this notion of voltage with the notion of voltage at a point in an electric field. On the other hand, the only way the charges in a circuit move is because of an electric field. Is the electric field just conveniently shaped such that it moves charges along the circuit at every point? What if the wire goes "uphill" and turns momentarily back toward the positive battery terminal but then turns around again. Wouldn't the charges get stuck in the local potential energy well? 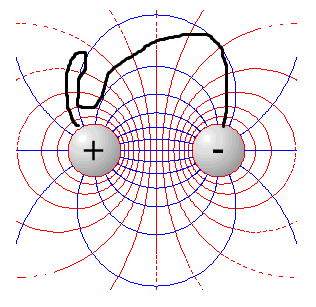 The plates of a charged battery create an electric field in the space around the circuit and in the circuit itself. At every point in the wire, this field "instructs" charged particles to redistribute themselves. This redistribution gives rise to another electric field that eventually combines with the battery's field to create a net uniform electric field inside the wire. It is this final uniform electric field which drives the current (causes mobile charge carriers within the wire to move). This feedback process is driven by surface charge redistributing itself on the wire's surface. The most astounding thing is that this entire process happens every time the wire's shape changes, and it happen VERY quickly. See the relevant chapters of Matter & Interactions by Chabay and Sherwood (3rd edition, Wiley, 2011) for details. This the only introductory text I know of that deals with surface charge gradients in circuits, and thus is the only one that correctly explains the underlying physics.

The electric field lines shown in your diagram are for the electrostatic case of two oppositely charged circles.

When analyzing even the simplest direct current (DC) circuits, it is important to realize that the situation is non-electrostatic, since charges are moving through the conductor.

The essence of circuit theory can be understood with reference to Kirchoff's circuit laws, which were devised some years prior to Maxwell.

Of course, these laws are embodied in Maxwell's equations, as we can see from the Maxwell-Ampere law:

Which, for electrostatic and magnetostatic (DC current) cases, become:

This means that the electric field is conservative in these cases. That is, we can define a scalar function (the electric potential, V), where:

In the absence of any other forces or constraints, a small positive test charge will follow the path shown by the blue line, so the electric field lines indicate the path that a 'free' charge will take. Note that there are not normally any 'free' charges in the air, as the air is a dielectric (insulator).

Now suppose a lamp is connected to the terminals of the charged battery by two pieces of resistive wire along some arbitrary path. Assume also that the overall charge of the battery/wire/lamp system is neutral.

When the wire is connected to the charged battery terminals, the electrons move along the wires and through the lamp, although they experience some 'resistance' due to 'frictional' forces within these conductors which reduce the mobility of charge carriers. These frictional forces are generally proportional to the velocity of the charge carrier and result in heat dissipation in the wire and lamp, as well as light being emitted by the lamp filament.

Note that whist the current flows through the wire, the electric field outside the wire is distorted with respect to the electrostatic case, due to the charge concentration at the surface of the bends in the wire.

This is analogous to a river meandering down a gentle slope. Just as the flow of water carves out the path of a river, so too the flow of current through a wire creates an electric field. Under high current flows, the change in momentum of the water around a bend results in a higher thrust force and hence pressure on the outer bank of the river. As long as current flows through the wire, there is a slight but steady (monotone) drop in potential along the length of the wire from positive to negative, despite the wire doubling back towards the positive terminal, because the current in the wire alters the charge distribution and hence the electric field (forces) and potential gradient (pressure) along the wire.

But how can the circuits be of absolutely any shape?

Circuits can be any shape because you can bend wires. But don't worry I'll explain how the charged react to the weird shape so as to have a nice flow of current.

If I have an extremely long, convoluted wire, how can we analyze voltage as simply as we can?

A lumped matter model means you treat the circuit as a bunch of parts that each have simple actions and reactions. An example is a resistor, it drops voltage proportionally to current and takes the energy loss and expels it as heat. I promised to explain, so here goes. The charge distribution in the resistor is not always a zero net charge density. Look at your picture. If the wire were neutral, the voltage would drop as per the equipotentials. But for each little bit of resistor with current I, we need a voltage drop per unit length (the exact value depends on the resistance). If the wire is shaped so that the initial charge distribution doesn't have the right voltage drop then something happens. There develops actually a nonzero charge distribution. In your example the charges would get stuck in the well, at first. But then there would develop a relatively positive charge density there which would itself raise the potential up, and it keeps doing that until you have the voltage drop you need.

OK. But why do you need that voltage drop? Let's look at your next question.

On the other hand, the only way the charges in a circuit move is because of an electric field.

Charges are particles so they do have inertia, a steady current could persist just fine by inertia if there were no forces acting on it. However, in a resistor there are forces. The reason you need a certain voltage drop is that you want the electric field to push hard enough to overcome the loss of energy that the mobile charges give to the lattice. The wire has a lattice of atoms, and when the electrons push against them they heat up. So energy is constantly being lost from the electrons to the lattice and then to heat. You need to have the electric field do an equal amount of work to have equilibrium. That voltage drop per unit length is exactly what was needed to overcome the resistive losses for that level of current. So you need to actually drive the electrons hard through the resistor to overcome the resistive loses they experience traversing the resistor.

Is the electric field just conveniently shaped such that it moves charges along the circuit at every point?

In general (in the steady state) the electric field is distributed so that the net force on the charges is orthogonal to their motion (for a stationary circuit). So there are net forces to whip the charges around corners. And there are electric forces to counterbalance other forces. But all in all no net work is being done in most parts of the circuit.

What if the wire goes "uphill" and turns momentarily back toward the positive battery terminal but then turns around again. Wouldn't the charges get stuck in the local potential energy well?

Once they start to get stuck that raises the potential up so the next ones don't get stuck. Same thing happens at corners, the first few charges try to go in straight lines when they approach a bend in a wire, but that motion causes a charge buildup that then steers the next charges around the turn.

Not the answer you're looking for? Browse other questions tagged electrostatics electric-circuits electric-fields voltage or ask your own question.

8
How does electricity flow in conductor when potential difference is applied?
6
Why is current in a circuit constant if there is a constant electric field?

1
Need help understanding a simple circuit in-depth
0
What is voltage in a circuit?
1
Some questions related to circuits and flow of electrons
1
Electric potential in a wire
0
I don't understand something about battery voltage
6
Can someone answer my questions on the concept of voltage?
0
Why do charges move across wires in circuits if the voltage across them is zero?
3
What is “electric field causes current in a conductor (metal wire)” exactly?
0
Voltage and electric field between Live and Neutral conductors
1
What is the voltage in electrical circuits?