Why is the latent heat of fusion of helium-3 a negative quantity?

I am new to this community and I have little to no background in physics, so I apologise should I make a glaring factual mistake in my question.

I briefly studied the phase transitions of matter and, quite by accident, came across the "latent heat of fusion", defined as the energy needed to be supplied to the system to change it from solid to liquid. It reads on Wikipedia that this quantity is, naturally, generally positive as an increase in internal energy is needed for the transition. However, there is apparently one notable exception as is the case with helium.

Quote: "Helium-3 has a negative enthalpy of fusion at temperatures below 0.3 K. [...] This means that, at appropriate constant pressures, these substances freeze with the addition of heat."

Could anyone kindly explain to me, in laymen terms please, why is it the case that when heat is added to this substance, it FREEZES at constant pressure? It honestly fascinates me and I can't wrap my head around it.

I have attempted to answer this interesting question noting the following:

I have little to no background in physics

Could anyone kindly explain to me, in laymen terms please

The behaviour of $^3 \rm He$ is anomalous if not unique because of a number of reasons.

The second reason is that in the nucleus of $^3 \rm He $ there are two protons and one neutron each of which have a property called spin with a value of $\frac 12$ and overall the $^3 \rm He $ nucleus has a total spin of $\frac 12$.

An important physical quantity which I will use is entropy which you can think of as a measure of disorder and if you add heat to a system you will increase the disorder and hence the entropy.
So you can melt solid water crystals (ice) by adding heat to it to form liquid water in which the molecules are less ordered thus increasing the entropy of the water.

A useful visual aid which is used when discussing the phases of a substance is called a phase diagram which is a graph of pressure against volume.
A normally behaved substance has a phase diagram like the one below which is for carbon dioxide. 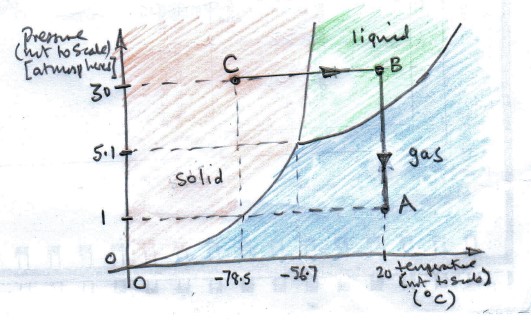 Suppose you have some carbon dioxide which is at a temperature of $-78.5\, ^\circ \rm C$ and a pressure of $30$ atmospheres (C) you will see from the graph that the carbon dioxide is a solid.

The phase diagram for $^3 \rm He $ is very different from that of carbon dioxide. 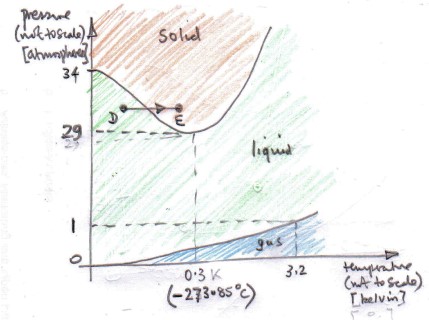 The transition from liquid to solid when the temperature is rising is equivalent to the enthalpy of fusion being negative.
To explain this behaviour one must turn to quantum mechanics.

It would seem that during that transition one goes from a less disordered liquid to a more disordered solid and that is in fact what is actually happening.

As the temperature of liquid $^3 \rm He $ decreases so does the spins become more ordered (arrows pointing in the same direction) and so the entropy of the liquid state decreases with temperature.

However in the solid state the nuclei stay disordered and the entropy does not changed with temperature.

So there is this very strange condition for $^3 \rm He $ where the solid state is less ordered than the liquid state which is exactly the opposite for carbon dioxide and all? other substances except $^4 \rm He $.

This anomalous behaviour of $^3 \rm He $ can be used as a basis for cooling below $0.3 \rm K$ down to about $1 \,\rm mK$ because if one increases the pressure on a sample of liquid $^3 \rm He $ such that it turns liquid to solid, this requires an input of energy which can come from the thermal energy of the sample itself - the temperature of the sample decreases.
This is called Pomeranchuk cooling and was used by Lee, Osheroff and Richardson in their Nobel prize (1996) winning discovery of the superfluidity of liquid $^3 \rm He $.