I'm pretty sure I will receive many wonderful answers, but could you also refer me to a specific reference by page number to read more?

If a body touches another body, there is a force of reaction or contact force between the two bodies. This force is perpendicular to the surface of the body exerting the force. Like tension, the origin of this force is also electromagnetic. In Figure 2.29 we show the reaction force on several bodies. 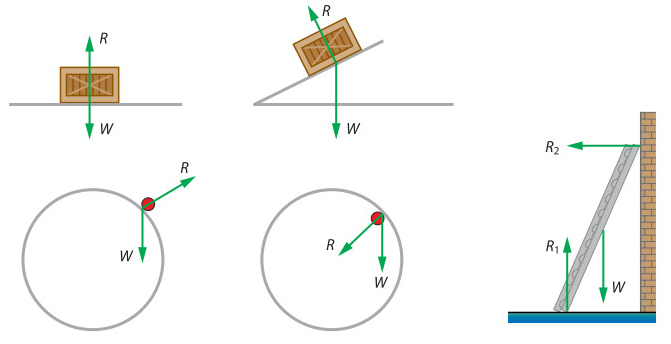 Suppose you are standing on a straight plane then the force of gravity is pulling you downwards with a force equal to $mg$ and because you are standing on a straight plane so you exert a force of $mg$ on the ground and according to Newtons third law the surface should also exert an equal and opposite force on you and this is known as the reaction force. So the force that you exert on the ground is the action force of normal reaction. That is why in general the magnitude of normal reaction is equal to the gravitational force.

But when you are standing on an inclined plane then the magnitude of gravitatinal force is still $mg$ but now you dont exert a force of $mg$ on the surface(since it is inclined) then your normal force would be equal to the force that you exert perpendicularly on the inclined surface which is $mgcos\theta$.

Conclusion:- Normal force is the reaction of that force that you exert perpendicularly on the surface on which you are standing.

The normal force is the reaction of the force that pushes the surface.

Whenever a body exerts a force on a surface, the surface will exert a normal force on the body.

Normally, this action force is the compontent of weight perpendicular to the surface.

The normal force, thus, has the same magnitude as that component of weight, same direction and opposite sign.

In the 2nd circle of your picture, there will only be normal force if the ball is "pressed" against the surface.

The issue is nomenclature

The nomenclature around forces in physics textbooks (and physicist) isn't standardized enough to give a definite answer to your question. Instead, you will just have to pick up from context what type of forces are being discussed. Here are some examples to help you along:

The word “reaction” was used by Newton when he stated his third law.

Law III To every action there is always opposed and equal reaction : or the mutual actions of two bodies upon each other are always equal and directed to contrary parts.

I agree with Mathemagician that the use of the term "reaction" here is not the same as when describing action/reaction forces.

As Mathemagician correctly points out, the normal "reaction" from the ground on the box in your 1st diagram is not the action/reaction partner the weight of the box, because (i) weight is gravitational whereas normal force is electromagnetic, (ii) these 2 forces act on the same body (the box), and (iii) weight (or its normal component) and normal reaction force are not always equal.

In this context the contact force is called a reaction force because it is the "reaction" or "response" to a given situation and it is difficult to calculate or measure directly. The only practical way that you can decide what value it has is by recognising that it is the unknown response to some other force or forces which are known, in order to make a known acceleration happen. It is the unknown force which is needed to make the equation $$\sum F=ma$$ balance.

The same can be said of the tangential reaction force, better known as the static friction force. It is another contact force whose value is variable but very difficult to calculate or measure except by deduction from applying the equation $\Sigma F=ma$.

In theory both normal and tangential reaction forces could be calculated directly - eg by modelling them as spring-like forces. Just as you can calculate weight using $W=mg$ if you know the mass $m$ and the strength of the gravitational field $g$, you can also calculate the normal force using $F=kx$ if you know the amount $x$ by which the ground is compressed by the box and the spring constant $k$ for the ground, assuming it obeys Hooke's Law. But it is not practical to measure either $x$ or $k$ because one is microscopically small and the other is enormously large. (Alternatively we could measure the compression of the box, which if made of wood or cardboard will be greater than that of a concrete, granite or marble floor.) Likewise the static friction force could be calculated from the microscopic lateral displacement of the box or the ground, and its enormous lateral spring constant - but again it is not practical to measure either of these.

Mathematically a contact force (normal or tangential) is one type of constraint force. It takes whatever value is necessary to ensure that the constraint condition is fulfilled. Usually this means that a boundary is not crossed.

We assume that the ground and the box are rigid bodies which do not deform at all, not even on an atomic level. This means that $k=\infty$ and therefore $x=0$ for all values of applied force $F$. There is no way of deciding what value $F=kx$ has using this model - it is indeterminate. The only way we can calculate the contact force $F$ is by deduction, as the unknown force in the equation $\Sigma F=ma$. In a 2D problem, if we have 2 unknown forces we can use the rotational equation $\Sigma T=I\alpha$ to find the 2nd unknown force. If we have 3 unknown forces then we're in trouble. The rigid body model cannot cope with this situation.