Why was the glass broken in the Lobby but not above the impact zone? - 9/11

Disclaimer: I do thoroughly believe that 9/11 was a terrorist attack, so please don't start arguing whether it was an attack or inside job, focus on the question.

Also: I was about to post this in History but I figured that physics would be more suitable.

So the question that I have always wanted an answer to but never found one is the following:

Why was the glass broken in the Lobby of the Twin Towers but not above the impact zone?

So I watched the documentary of the French Brothers who followed the Firefighters and when they respond to the Attack they make their way to the North Tower and when they enter, you can clearly see broken glass.

The link to the scene of the documentary, the shattered window can be seen starting at 0:55 seconds. https://m.youtube.com/watch?v=XvUIQZ7t7Ak 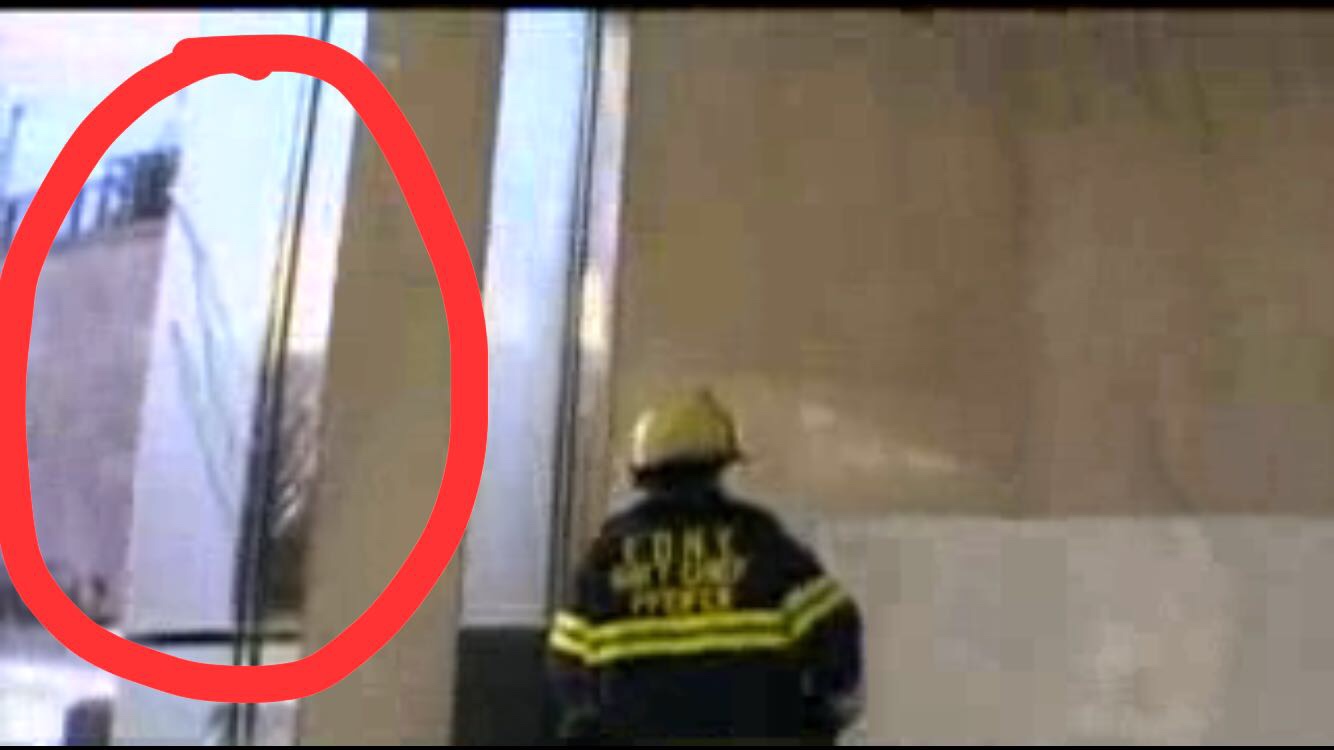 But there's also a recording of the 911 responders who talk to the people trapped above the impact zone (I can't find the video on YouTube right now, will link it as soon as I find it) where a woman shouts to "break the windows".

So how is it possible that the glass on the 100th Floor is intact when the plane hit the building at the 80th floor, but the glass in the Lobby all the way down at the ground is broken?

I think the answer may be shear stress in the glass.

When the plane hit the tower the whole thing presumably swayed and deformed in various ways before settling down again. I think the movements of things such as tall buildings under wind and, I presume, impacts of various kinds are modelled by civil engineers, and I bet that they are complex. However I suspect that the temporary deformation (assuming the whole thing was mostly-elastic) would be particularly large at the base of the tower where it's anchored in the ground: obviously the base doesn't move far, but it probably bends quite a lot (for instance consider pushing a stick stuck in the ground sideways near it's tip: it's going to break somewhere near the bottom).

So when the tower swayed and deformed after the impact, I guess that the window frames became significantly non-rectangular temporarily and this caused the glass in them to fail. The video does seem to bear this out, as there seem to be cracks propagating in from the edge of the panes.

The part of the tower above the impact was both of lower mass and also wasn't anchored anywhere and so might not have experienced the same thing.

I've posted this as an answer (it was originally a comment) as I was asked to do so: I do think that it's mostly a fairly seat-of-the-pants guess however and I'd welcome clarification or correction from people who study the behaviour of tall buildings and other structures.

the answer is in the description of the video " It shows that an explosion occurred at the lobby of the first World Trade Center tower that was hit by an airplane." Jet fuel ran down the elevator shaft and exploded (hence the pple on fire mentionned in the video)

Not the answer you're looking for? Browse other questions tagged newtonian-mechanics forces estimation glass building-physics or ask your own question.

10
How to calculate the number of glass sheets that will be broken by a falling object?
4
Why didn't the glass break?
10
Why iron sparks damage the glass surface but do not harm leather apron?
1
Why does molten sand cool to form glass and not return to it's original yellow form?
1
A metallic container when hammered deforms but a wine glass when falls or hammered breaks. Why?
2
Can a glass screen protector reduce the impact on a phone?
17
Why does pepper not stick to the glass with print inside my pepper shaker?
0
Is there a relation between the domains in broken (but not shattered) tempered glas and the amorphous structure of glass?