I'm relatively new to astronomy and I would like to better understand why we need filters.

I understand the concept of the filter, I just can't understand we they are so useful.

In other words, what can you do with them that you can't do without them?

Thank you in advance

The reason filters are so useful is precisely why we have the same kind of system in our own eyes (three different types of cone cells with sensitivity to different parts of the spectrum): they allow our instruments to see color.

Filters come in two types: broad and narrow. Broad filters are sensitive to a wide range of the spectrum (much like the cone cells in our eyes), while narrow filters are usually designed to block out everything but a specific (astronomically-useful) wavelength.

Usually, CCDs and other light-collecting devices don't give us a color image; rather, they just tell us how many photons they collected, which, at best, will give us a black-and-white image. In order to actually form anything close to a color image, we overlay three separate black-and-white images taken through three different filters. These three images, when given the colors of red, green, and blue, give a full-color image. If the three filters roughly emulate the sensitivities of the eye's cone cells, we get a true-color image; otherwise, we get a false-color image. Many of the most striking astronomical images are false-color, because not having to adhere to the spectral sensitivity of the eye allows astronomers to highlight the most interesting features of whatever is being examined.

Aside from making cool pictures, filters also give us a quick way to estimate the basic spectral characteristics of many stars at once. One of the most prominent ways in which this is done is the "B-V color" of a star, which is its magnitude in the B filter (which is broad and blue) minus its magnitude in the V filter (which is broad and somewhat redder). The higher the B-V value, the bluer a star is. Since the color of a star is related to its blackbody spectrum, we can correlate the B-V color to the temperature of a star. As such, the B-V color is the horizontal axis of one of the most important collective descriptions of stellar populations, the Hertzsprung-Russell diagram (the other axis is absolute magnitude, which is directly related to luminosity). Here's one for the M55 cluster: 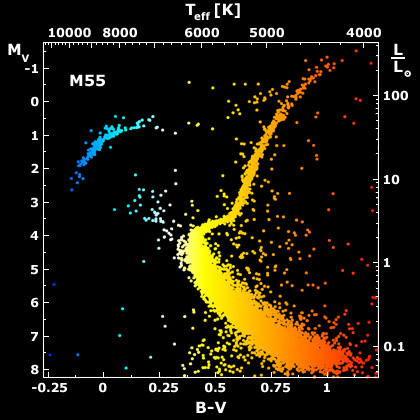 We might be able to glean the same information by taking the full spectrum of each star one at a time, but that is far too labor-intensive to be practical at this time (let alone in the early 20th century, when the HR diagram was developed).

In contrast with broad filters like U, B, and V, which give rough information about a star's color and broad spectral characteristics, narrow filters allow us to concentrate on very specific wavelengths. Some of the most common are:

These three narrowband filters in particular form the "Hubble palette," and allow us to produce astronomical images in such a way that immediately illuminates the astronomically-interesting parts of an object. For example, in a typical photo of the nebula NGC 2237 (taken from http://www.mcwetboy.com/mcwetlog/2010/04/falsecolour_astrophotography_explained.php), the visible-spectrum image looks like this: 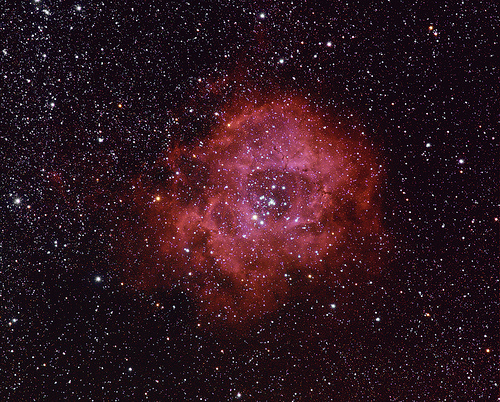 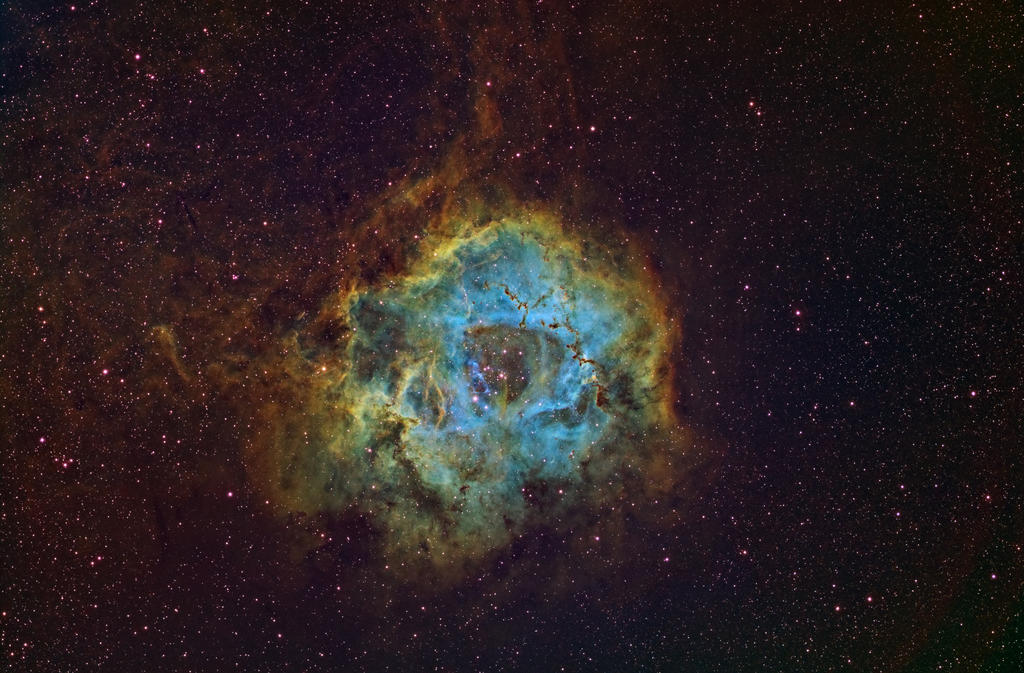 You can clearly see the internal structure of the nebula here, while in the visible-spectrum image it's just a red blob. Not only that, but we know the specific composition of the clouds that we're seeing, based on their color in this false-color image, whereas before, we only knew how bright they were (there are many things that look red, but only one that looks the exact shade of red that would pass through a S-II filter, for example).

Here are some reasons. I'll keep things in my reply fairly basic and invite the experts to weigh in with more detail. Probably_someone's reply above has the detail and excellent photos as well.

The light emitted during astrophysical events carries information about the mechanism by which it was emitted and the specific conditions present during its emission. So if an astrophysicist wishes to search for and detect a specific physical process in the cosmos, she could improve the sensitivity of her detection apparatus by fitting it with a filter which passes the light that is characteristic of that process while blocking extraneous light which is not.

The phenomenon of suburban sprawl near observatories has compromised the ability of astronomers to do spectroscopy through their telescopes because of light pollution from sodium and mercury vapor streetlights. To restore some of this lost capability, it is possible for the astronomers to fit their instruments with filters which specifically block the emission lines from the streetlights. This means that the astronomers are reduced to doing spectroscopy "through a picket fence" but that is better than nothing.

Note here that although the filters I have described above were originally pieces of tinted glass that were inserted into the optical path of a camera loaded with silver halide film, they still work with digital imaging devices and it is possible also to apply "filters" in software to process digital images.

Not the answer you're looking for? Browse other questions tagged astrophysics astronomy spectroscopy or ask your own question.