I was doing a quantum physics past paper and there was this question about ionizing atoms with laser. My answers made reference to the photons within the laser knocking off or transferring their energy to the electrons and allowing them to escape if this energy exceeds their biding energy. I then checked on the markscheme and all it mentioned was the laser modifying the nuclear potential to allow the electron to quantum-mechanically escape. I am confused.

I know quantum tunneling happens when a wave function meets a potential barrier, but I don't understand how the laser provides this barrier. Isn't a laser just a stream of photons basically? Also, the markscheme made reference to OTBI ionization for hydrogen (the second part of the question was specifically about hydrogen).

I did some reading and I get the idea it is the same thing as quantum tunneling, so I am not sure why in the markscheme the two seem like different ideas altogether. Unfortunately, the markscheme is not a full answer but just a string of key words to award marks so that doesn't help.

I suspect that the core of your question is this:

Isn't a laser just a stream of photons basically?

The answer to that core problem is essentially "yes, but there are situations where that isn't a useful description".

In particular, tunnel ionization and over-the-barrier ionization are phenomena that take place when the laser's frequency (and thus its photon energy) is very small, so that you need many photons to make it all the way up to the ionization threshold. Since you need many photons, the process basically won't happen unless you have a very high field intensity, but this can be problematic in its own way, because the perturbation-theory expansion that allows you to talk about 'absorption of photons' loses its usefulness at those high intensities:

This is where tunnel ionization comes in. Supposing that you have a field of angular frequency $\omega$, intensity $I$ and peak field strength $F=\sqrt{2I/\varepsilon_0c}$ ionizing a target of ionization potential $I_p=\frac12 \kappa^2$, then you're in the multi-quantum regime whenever $I_p/\hbar\omega$ is greater than one, but the real discriminant is known as the Keldysh adiabaticity parameter, $$ \gamma = \sqrt{\frac{I_p}{2U_p}} = \sqrt{\frac{I_p/2}{e^2F^2/4m_e\omega^2}} = \frac{\kappa\omega}{F} $$ (with that last equation on atomic units; $U_p$ is the ponderomotive energy). If the field is strong enough and slow enough that $\gamma < 1$, then the perturbative expansion that explains ionization as the absorption of individual photons loses its usefulness, and you need to move to a different picture.

That picture is tunnel ionization. Since we're in a roughly adiabatic regime, where the suitable measure for $\omega$ (namely, $\gamma$) is small, then we can basically think of the interaction with the laser, the dipole coupling $$ \hat H_\mathrm{interaction} = e \hat{\mathbf r} \cdot \mathbf F(t) $$ as a time-dependent linear potential that gets added to the initial atomic potential well. And, if that field is strong enough, then it can bend the potential low enough to make a potential barrier that the electron can then tunnel through: 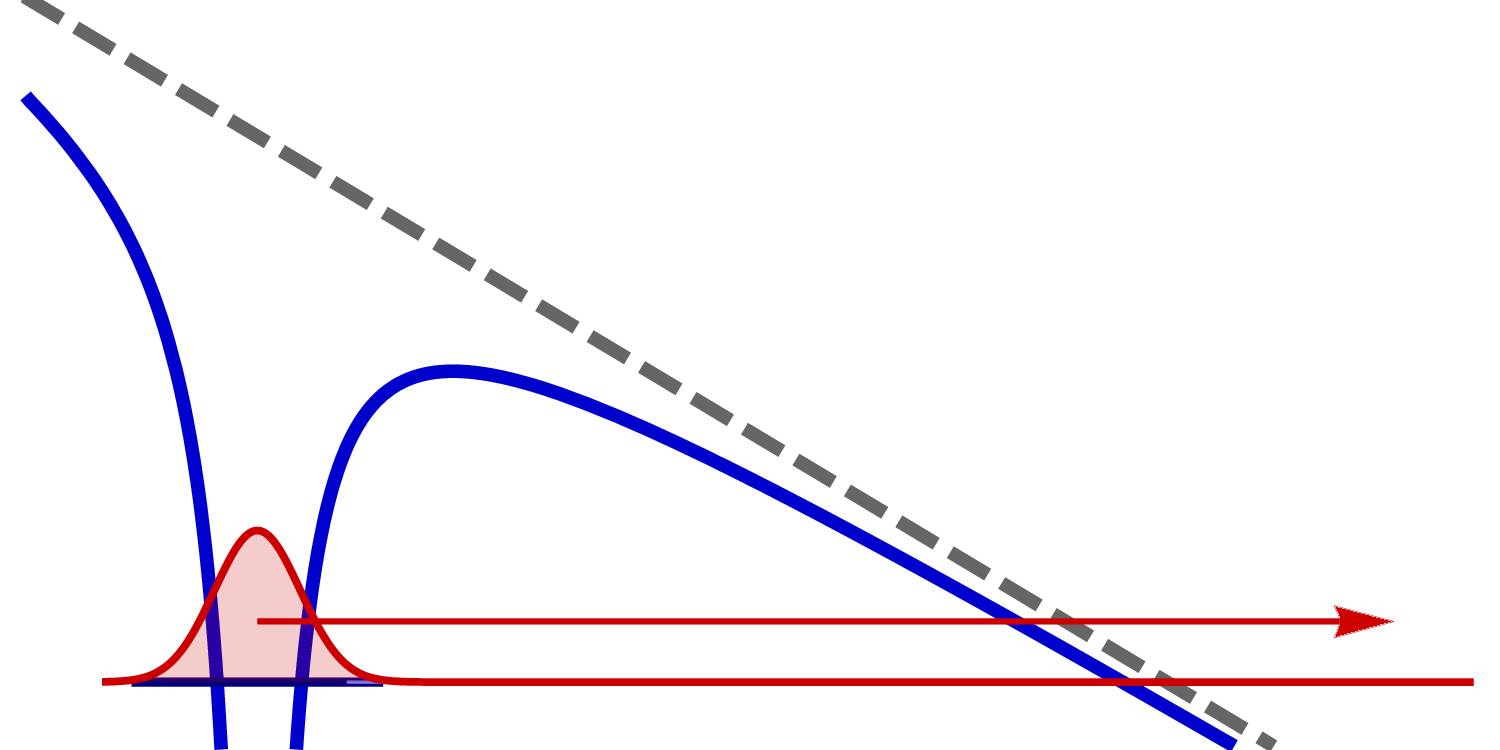 If you do the calculation for the rate of (quasi-static) tunnelling through that barrier, the core result is that the rate goes as $\omega_t = F/\kappa$ (or $\omega_t = eF/\sqrt{2I_pm_e}$ with all the constants put in), and this mechanism will only produce a sizeable tunnelled population if the field peak is sustained longer than that, i.e. if the Keldysh parameter $\gamma = \omega/\omega_t$ is small enough.

Thus far for tunnel ionization, which is relatively 'clean' as far as things go. Now, it should be clear from my diagram above that if you turn up the intensity even further (thereby taking you even further away from the validity of the photon picture) then at some point the peak of the tunnelling barrier will be so low that it falls below the energy level the electron was initially sitting on: this is the situation for Over-the-Barrier ionization, and it should be clear that it is swift and effective at removing the population from the bound state and onto the continuum.

The laser doesn’t provide the barrier, on the contrary, the laser helps to overcome the barrier. That means that when you give visible light, you achieve just an excited state of the atoms, and it’s impossible to get them ionized. But these excited electrons can easily escape through quantum tunneling, something that is not possible in classic physics. Using a laser you can give a pure wavelenght of visible light, exactly towards a target.

Not the answer you're looking for? Browse other questions tagged electrons atomic-physics laser quantum-tunneling ionization-energy or ask your own question.