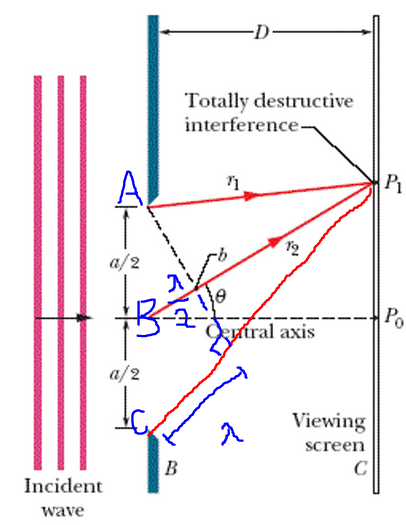 Essentially, to which point on the incident wave does the light ray from point C interfere destructively with?

It's not quite clear what your assumptions are, but it appears that you might be assuming that only two "rays" can interfere at a time at any point. If so, that's not correct. Destructive interference doesn't destroy the interfering waves. Instead, interference involves the superposition of all the "rays" incident at a point. I use the term "rays" here because of the way you made your drawing with waves coming into the aperture and rays leaving the aperture.

If, instead, you draw concentric circles around A having the same radial spacing as your incident wavelength, and do the same for B and C, then you might get a better idea of how Huygens principle works. Anyplace that circles from A, B, and C all overlap, you'll get constructive interference. Destructive interference (and interference in general) is more difficult to illustrate graphically, because it requires taking both phase and amplitude into account. Phase change is proportional to the distance from the point source; and the amplitude contributed by each point source drops in proportion to $1/r$, where $r$ is the distance from the point source. Note that this is different from the way that intensity drops, which is in proportion to $1/r^2$. The only way I know to do the interference calculation is to use calculus: to do an integral adding all the phase and amplitude contributions from the wavefront, across all the points in the aperture.

If this doesn't help, please try to clarify your question.

Assume that there are ten secondary sources as shown below with the waves from source $1$ overlapping with that from source $6$, $2$ with $7$ etc with the path difference being $\frac \lambda 2$. 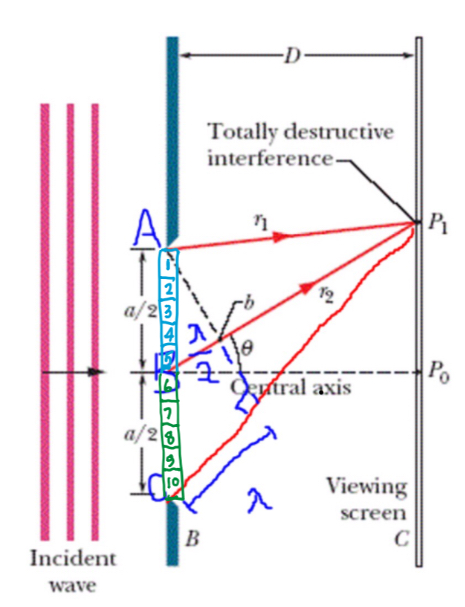 Now imagine that instead of ten secondary sources you increase that number to one thousand, one million, one billion etc.

The picture is a simplification using only 3 point sources when in fact they are infinite. The amount of light reaching P1 will be the integral of the phases reaching P1 from across the entire line segment AC. It will probably be something like the integral of cosine from -pi to pi, which is 0.

Not the answer you're looking for? Browse other questions tagged visible-light waves huygens-principle or ask your own question.