When the oscillator is a system with an angle can we define the angular frequency to be the radians per unit time covered by the system itself?

I read on stackechange that in springs or any one dimensional oscillator the angular frequency is just describing a rate of angle change in the associated circle on which it's projected. Something like this : 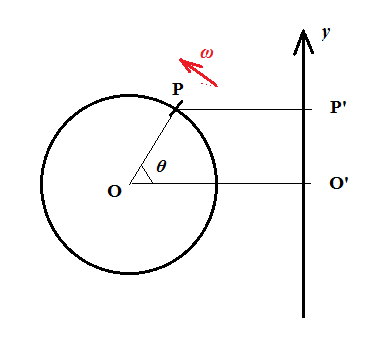 My question is: suppose you have a pendulum as an oscillator. Would it be correct to say that the omega / angular frequency. Is a measure of radians per unit time that the pendulum itself going through. Or there is still some other hidden circle for which this is defined?

Edit: is the following definition possible? : we take the whole edge on which the pendulum is passing through and circulate it. Meaning, we make a closed circle out of it . Would then the radians in that circle can be thought of as the angular frequency? If it's correct, would that be correct for the line on which a linear spring is oscillating?

Would it be correct to say that the omega / angular frequency. Is a measure of radians per unit time that the pendulum itself going through.

If $\theta(t)$ is the (small, time varying) angle the pendulum makes with the vertical axis, then

But the "radians per unit time that the pendulum itself [is] going through" isn't constant with time and isn't the angular frequency but is instead the angular velocity:

The construct that you are looking at is sometimes called "the reference circle" and a electrical engineer would call it a "phasor".

In either case the circle is not (necessarily1) a real thing, it is a mathematical construct used for several purposes

You certainly can define the angular frequency of the oscillator as

1 You can realize a phasor as part of a demonstration. Place a vertical pin on a turntable and shine a bright light on it from across a darkened room. The shadow of the pin will execute 1D harmonic motion on the wall.

For bonus points, rig a small angle pendulum with the same frequency just above the projection height of the pin, and set it in motion so that it matches the motion of the shadow. (This is hard but I've seen it done really well once and it is beautiful—even mesmerizing—to watch.)

With a pendulum and your defined circle, the rate at which the angle $\theta$ is changing $(\frac{d\theta}{dt})$ is not the same as the angular frequency ($\omega$).

Let's assume that our pendulum is only displaced by a small angle, so we can use the small-angle approximation and get a nice analytic solution of $\theta$ as a function of time. This solution could look something like $\theta(t)=Acos(\omega t)$.

We use the term "angular frequency" with sinusoidal oscillations since the argument to sinusoidal functions are angles. Even though in the example of the pendulum $\omega$ does not refer to an actual angle in our system, it is still called an angular frequency. It seems like you have a grasp on the actual physics involved, so I wouldn't get too hung up on definitions and semantics.

Not the answer you're looking for? Browse other questions tagged newtonian-mechanics harmonic-oscillator angular-velocity or ask your own question.