Why less temperature at high altitude

Why there is always cold at high altitudes. e.g. at peak of mountains. Also as we go high from sea level, temperature starts decreasing. Why is it?

I'd like to add to the answers already given. Indeed, the atmosphere is transparent to shortwave radiation from the Sun, but absorbs a lot of the longwave radiation from the Earth; that's why we have the greenhouse effect, that's why the Earths has a liveable climate and that's part of the reason why we have the lapse rate we observe. But why is it colder at the Tibetan plateau, which is a large, flat area at roughly 4 km elevation? Aren't we equally close to the local surface there as when we are at sea level?

Let's assume the Tibetan plateau receives the same intensity of solar radiation as lower areas at the same latitude. In reality, it probably receives more due to the dry climate. Then it should heat up more, shouldn't it? But it doesn't. The system Earth-Atmosphere can be considered to be in a local Radiative-Convective Equilibrium (see the diagram from Kevin Trenberth below). This means that the energy flows "in" and "out" cancel out by energy transport due to radiation and convection. In other words: what goes in, must go out (this is not really true locally, because there are large-scale flow patterns known as wind). Now, the Earth surface emits radiation according to its temperature with $P = \epsilon \sigma T^4$. Some of this radiation is aborbed by greenhouse gases (or clouds) in the atmosphere: water vapour, carbon dioxide, methane, and others. Then the atmosphere heats up, and again radiates according to $P = \epsilon \sigma T^4$; part of this radiation goes into space, and part goes back to the surface. The greenhouse gases keep the surface of the Earth warm like a blanket.

Now at the Tibetan plateau, the atmosphere is much less dense, because the elevation is so high. Therefore, radiation emitted by the surface is not absorbed much, but mostly exits straight into space. This means that the surface cools down. To return to the blanket analogy: Tibet has a much thinner blanket than lower elevations do.

Now I have made a number of severe simplifications, because in reality it depensd on day/night, on clouds, on atmospheric flow such as wind, on humidity, and on other factors. But whereas the explanation given by others explains why it gets colder higher up in the free atmosphere, I think it doesn't really explain why it is colder at the Tibetan plateau. 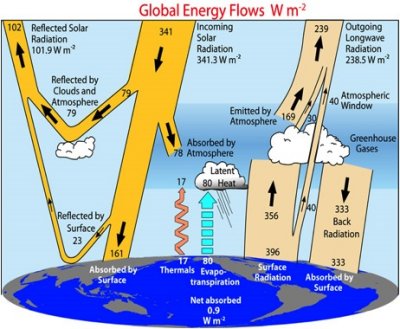 Crazy Buddy is quite correct that it's because gas expands and cools as it rises, but there is more to it than that.

For something to be be heated it must either absorb EM radiation, or it must be heated by some hot object it's in contact with. Air doesn't absorb light so it can't be directly heated by sunlight. Instead the sunlight passes through the air and heats the ground, and the ground heats the air.

The expansion comes in because the hot air that is heated by the ground rises. However as it rises it's volume increases and therefore it's temperature decreases. So the decrease in temperature with height is indeed due to expansion, but this is only the case because air is heated from below by the ground.

This is a very old question, but none of the answers fully address the question. I'll frame my answer in terms of answers to a series of questions:

How much does temperature vary with altitude?
The answer is quite a bit. The following graph that depicts average behaviors of temperature as a function of altitude: 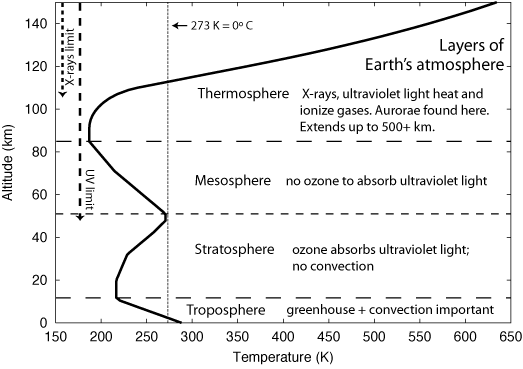 This convection-driven heat transfer is one of the two key mechanisms by which heat is transferred from the bottom of the atmosphere to higher levels. The other mechanism is the greenhouse effect. While our atmosphere is more or less transparent at visible wavelengths, it is more or less opaque in the thermal infrared. Water vapor, carbon dioxide, and methane are the key greenhouse gases that cause this greenhouse warming. Just as we use blankets in winter to keep us warm at night, those greenhouse gases act as a blanket to slow the transfer of thermal radiation from the sunlight-warmed surface to the blackness of space. Convection dominates over radiative heat transfer if convection is possible. The greenhouse gases and the radiative heat transfer that results is what makes the conditions right for convection to occur.

The answer is because the plateau is so very high. Free air at that altitude is heated rather indirectly from the ground far below. Intervening air steals much of the rising warmth. The lapse rate is in full swing. The plateau is heated directly by the high elevation land. The solar flux is higher than at sea level because of the plateau's great altitude. The plateau is in fact a major heat source for the upper atmosphere. A large number of scientific articles have been published on this subject since the 1950s.

As long as we don't go much higher (we stick ourselves within the troposphere), the lower regions in the atmosphere can be roughly approximated as a bulk of ideal gas (that's the standard atmosphere we use in our aerodynamics course), so that we can treat it using the ideal gas law ($PV\propto T$). As we go higher and higher, the atmospheric pressure decreases, causing the temperature to drop (since they're directly proportional).

This table shows the variation of pressure with altitude in psi.

As Mark said, the water vapor content in the air also plays a major role. Different lapse rates have to be considered for change in humidity. Even a slight variation might significantly affect the lapse rates.

A natural question should've come by now, "Why does the pressure decrease then?"

Because the air molecules here at lower altitudes experience the weight ($mg$) of the molecules above them, thereby a net compressive force is produced. Though the force is very small (of the order of $10^{-25}$ or something) for an individual molecule, considering as a whole (a few kilometers depth and width), the net weight is big! As altitude increases, the downward force also decreases due to the decreased density of the molecules.

And, (as Chris & John say), as we go to the upper atmosphere, the temperature starts increasing with altitude, as air gets heated up directly by sun's radiation!

Not the answer you're looking for? Browse other questions tagged temperature atmospheric-science or ask your own question.

0
Why are the tops of mountains covered with snow, but not at the bottom?
0
If hot air rises, why is it colder at higher altitudes?
1
Heat and Thermodynamics
0
Why is the air in high atmosphere typically colder than on the ground?
4
Why it is colder in mountains, at high altitudes?
2
Atmospheric pressure And heat convection
0
Details on why temperature is lower at high altitude

2
Pressure at a given altitude?
2
Temperature distribution in a column of air
3
How to calculate altitude from current temperature and pressure?
0
What factors affects the cold temperatures in high altitudes?
1
Why is it that the wind over land in day(low pressure) move to the sea(high pressure)?
8
Can we theoretically guide cold air from high altitude down to the needy cities as free AC?
0
Air density at very high altitudes ( $h > 100 km $)
1
In which altitude does Rayleigh scattering produce the blue color of the sky and are density fluctuations required?