When I studied interferences, I saw that only coherent sources could interfere.

In physics, two wave sources are perfectly coherent if they have a constant phase difference and the same frequency, and the same waveform. Coherence is an ideal property of waves that enables stationary (i.e. temporally and spatially constant) interference. https://en.wikipedia.org/wiki/Coherence_(physics)

What we saw is basically that light was emitted in wave packets. Each wave packet is coherent with itself but not with the others.

I cannot figure out what is the interpretation of such packets at a quantum scale. Light is supposed to be emitted when excited atoms emit photons. What makes some photons coherent and other not?

For example, let us take a double slit experiment with electrons or atoms. What does it mean for electrons or atoms to be emitted by coherent sources? More specifically, what condition their wave function should satisfy? What would be a wave packet of electrons? Is there a link with the idea that in order to have interferences, we must not be able to tell by which slit the electron went through?

Thanks to your answers, I almost understood how a single photon could be coherent with itself : its wave function $\Psi$ is spread in space and time. For example, an atom that emits a photon has a certain probability to emit the photon at each time. At a given time, there is a certain probability that the photon is located around the atom and then it propagates. Then we split $\Psi$ into $\Psi_1 + \Psi_2$ which correspond to the atom going through one arm (or one slit) rather than through the other. Finally, on the screen, the probability to get observe the photon in $\mathbf{x}$ at time $t$ is $$|\Psi_1(\mathbf{x}, t) + \Psi_2(\mathbf{x}, t)|^2$$ and the interference term in non-zero if the two wave functions overlap.

However, it seems that independent sources can also interfere (G. Magyar and L. Mandel, Nature (London) 198, 255 (1963), I couldn't find the original, but it was reprinted in Concepts of Quantum Optics by P. L. Knight, L. Allen). In another article (Interference of Independent Photon Beams, R.L. Pfleegor, L. Mandel, Phys. Rev., 159, July 1967), they reproduce the result and explain in the discussion that this mustn't be taken as independent photons interfering but is linked to the detection process.

I might not know enough of quantum optics to understand this properly. It seems that I'll have to wait before I can understand. Nevertheless, would it be possible to create two independent sources of particles like electrons or atoms interfere ?

If you look around the literature, you won't really see anybody writing out the wave-functions of a single photon. People will write wave functions of electrons when they are moving much slower than the speed of light (as they are able to move slowly because they have a mass), but never of photons. The reason for this is that, in quantum field theory, you really have to think about all the photons at once, not just one photon at a time.

When an atom emits a lone photon, there is no conception of whether that photon is "coherent" or not. Coherence is a property that many photons share with each other. Usually, when light is emitted, like in a light bulb or from the sun, the light is not coherent. To get single color coherent light, as described by Maxwell's laws before people knew about quantum mechanics, you perversely need to use a quantum mechanical mechanism, namely a laser. I do not really understand how a laser works, but somehow it exploits multiple energy levels in an atom to release light that is coherent with all the other light around it.

The quantum field states that most closely resemble classical waves are called "coherent states." Coherent states are states of the quantum photon field, for example, that are as close to the classical electro magnetic waves as is allowed by a generalized notion of Heisenberg's uncertainty principle. These are the states that a laser produces.

So it's weird: photons are quantum mechanical, but a laser can produce them coherently in a way that mimics classical mechanics.

Is there a link with the idea that to have interferences we must not be able to tell by which slit the electron went through?

As clearly described in this paper, when particles (like unbounded electrons) are sent individually through a pair of slits, a wave-like interference pattern develops, but no such interference is found when one observes which “path” the particles take. 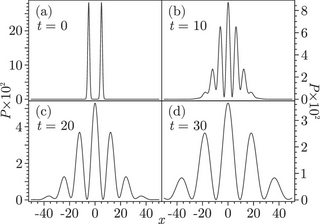 Interference effects at different times when the particles are left unobserved i.e., no measurement or $\sigma \rightarrow \infty$ 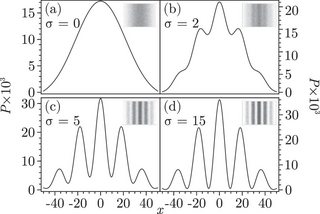 These figures show the effect of $\sigma$ at a fixed time (here $t=30s$). $\sigma = 0$ indicates a perfect measurement, coherence is lost and only a broad fringe appears. As $\sigma$ increases one can see the interference being restored. Insets show simulated detection screens.

Hence, there exists a clear link between the measurement(our ability to distinguish the path taken by a particle) and the visibility of the interference fringes.

Interference is a broader concept even than " having a constant phase difference". For example, if the phase difference between the two sources shifts at a constant rate, interference fringes still appear but they move at a constant speed. If a single photon is considered, the concept gets both a bit clearer and a bit fuzzier. We can't measure the shape and frequency content of a quantum wavepacket, but if we can make a lot of identical wavepackets we can build up a statistical measurement of their shape. It turns out that, by that method, we can show that individual photons have a coherence length: delay the photons in one arm of an interferometer by more than that length, and no fringes will form. The coherence length relates to the frequency bandwidth of the photon, which can be measured by analogous statistical means. For most practical purposes, interference only occurs between different parts of a single particle's wavefunction overlapping, and interference fringes that appear in an interference experiment depend on the particles all being prepared so that their wave packets have the same properties- whether the particles are photons, electrons, neutrons, or whatever. Each detection event just puts another dot into a pointillist representation of the fringe pattern.

Lets start with first quantization and the quantum mechanical wave function of a photon, before we start on wave packets, which belong to second quantization.

The quantum mechanical equation for photons is a quantized Maxwell's equation, in various forms, an example as from $\operatorname{Eq.}{\left(11\right)}$ in this paper:

The $Ψ^*Ψ$ of this wavefunction is the probability of a photon to manifest at $\left(x,y,z,t\right).$

Note that the $\vec{E}$ and $\vec{B}$ fields are the ones that will appear in the classical beam made up of zillion of such photons by superposition of their wavefunctions. As complex numbers phases will appear which will carry the possibility of constructive and/or destructive interference patterns.

Now we come to wavepackets and second quantization. Second quantization uses the plane wave solutions of the photon wavefunction as the field on which creation and annihilation operators will operate to describe a real photon in $\left(x,y,z,t\right).$ A single plane wave is not localized and one has to use the wavepacket mathematics to describe real photons, with adjacent frequencies in the field functions. These obey a form of the Heisenberg uncertainty .

The way the superposition of photons generates the classical electromagnetic waves in quantum field theory can be seen in this blog post by Motl.

The interference patterns have been addressed in the other answers.

The easiest example to see the above is when considering a combinations of two light-fields of orthogonal polarizations. You'll see that since $I = E \cdot E,$ and since the vectors are orthogonal, that you'll end up not having any interference terms.

In classical physics, the electric field is solved by Maxwell's Equations, which has solutions that behave like traveling waves that have these properties.

When two things are quantum mechanically "coherent", we obtain these "quantum interference terms" at the end. I think a lot of people consider this to be the "essence" of quantum mechanics.

When two things are quantum mechanically "incoherent," we don't have these terms:

Just like with the case of light, if the two states that want to interfere quantum mechanically are not initially identical, they will not be able to interfere coherently. You can study more about these "incoherent states" as they can be represented in the density matrix formalism of quantum mechanics (which unfortunately not often taught in quantum courses).

So now answering your questions:

What does it mean for electrons or atoms to be emitted by coherent sources?

Is there a link with the idea that in order to have interferences, we must not be able to tell by which slit the electron went through?

In the double-slit experiment, you can obtain an interference pattern even if you send the particles one-by-one. The coherent interference occurs between the two slit possibilities that the single particle can travel through. So the states after traveling through each slit possibility must look identical to interfere coherently. For example, if one of the slits changed one property of the electron (like it's spin) while the other slit didn't, then these two "probability amplitudes" will not coherently interfere because they aren't describing the same possibility states.

More specifically, what condition their wave function should satisfy?

For the double slit, the wave-functions of slit 1 and 2 $\psi_1(x)$ and $\psi_2(x)$ need to have a point in space where they overlap, and they need to be describing the wavefunction of a state with identical properties between 1 and 2.

What would be a wave packet of electrons?

Wavepacket? I'm not sure this is necessary for your understanding of your question, but a wavepacket (intuitively speaking) is basically when your wavefunction is localized to a short burst (a pulse) in time.

A wavefunction of electrons (plural) would imply a lot of electrons all interfering together, which is actually very complicated and I don't think this is what you're interested in.

Light is supposed to be emitted when excited atoms emit photons. What makes some photons coherent and other not?

Photons are considered "coherent" when they are identical and consequently can interfere completely. The simplest example (similar to the light case) is when the photons have orthogonal polarizations. Now the particles are completely distinguishable, and they will not have that extra interference term.

Making a single photon source experimentally that produces this "quantum interference" is tricky because it means that the photons have to have identical properties. For example, atoms that emit single photons often emit photons of a frequency that's dependent on their temperatures. So if you want to see quantum interference between these two sources, you will see that you would have to control their temperatures precisely to ensure the photons properties are identical so they can interfere.

0
Young's DS experiment and most light sources
5
Why can interference from two independent sources be observed?
2
Interference of independent electrons
0
How do I interpret the math relating to diffraction?
1
Interference of two non-entangled photons, calculation using tensor product of Hilbert spaces
7
Hong-Ou-Mandel Effect for incoherent photons
1
Interpretation of double slit experiment
0
Where is the quantum interference term in a qubit state?