Is the electric field at the edge of a uniformly charged disk infinite?

Consider a disk with a radius $R$ (I'll use $R=1$ at various points here) that has a constant surface charge density $\sigma$. Unlike the similar problem of the field in the vicinity of a infinitely thin ring, the field directly above the disk is very well behaved. Like the case of an infinite sheet of constant surface charge, the field limits to a constant as you get closer to the surface, and a point on the surface has a defined electrical potential. 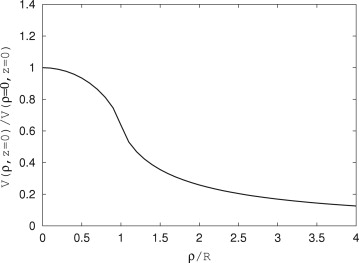 As you can imagine, the point of the highest slope is the edge of the disk. Is the slope (field) at this point infinite? From what I can make out of their equations, signs seem to point to "yes". The Elliptic functions are tricky, however, and I don't trust my conclusions. Up to the point $\rho=R$, the form of the above function is:

Here, $E(\rho)$ is an elliptic function, and is different from the paper, because it uses the "Matlab" convention while I use the "Wikipedia" convention. The slope of E() doesn't look convincingly upright, but the derivative seems to indicate it should be. I'm also troubled by the fact that I can't seem to numerically observe a divergence at $\rho=0.9999999999$.

The physics at play are even more perplexing to me. I expected that a 2D surface, any 2D surface, would have a finite field on its face. Not so for a line, I understand that. But the ring that defines the edge of the disk only has a differential amount of charge on it.

Consider another thought experiment: start at $\rho=1$ and $z=0$, I'll denote it $(1,0)$. Now move upward, but keep $\rho$ the same. If you're at $(1,0.001)$ you should have a finite field. But what happens as $z\rightarrow 0$? Does it just jump from a defined finite value to infinity? What on Earth is going on with the electric field in the vicinity of this edge, or ANY edge of a 2D surface for that matter?

Yes, the field is infinite, but it is only log divergent near the plate, so that it is hard to see the divergence numerically. You can see this easily by solving the problem of a uniformly charged infinite plate, which is a 2d problem. Here the charges are uniform along the negative real axis, where the 2d space is imagined to be the complex plane.

This problem can be understood as follows: the 2d electrostatic field of a point charge at the origin, written as a map from C to C can be written in complex form as:

Now you want to superpose all the charges on the negative z axis. This is a simple integral:

where I threw away an infinite additive constant (you should think of this as calculating the potential difference between the point z=1 and any other point). This is the function with a given fixed cut discontinuity on the negative real axis.

So at the point $r,\theta$, the electric field is

Where I have restored the $\rho$. The part in the y-direction is finite, as your intuition says--- the discontinuity is equal to the charge density (this charge density is the cut discontinuity of the electric field analytic function, which is a way of making it obvious that the electric field goes as the log--- the log function as a constant cut discontinuity). The divergent part is in the x direction, and it is only invisible in the bulk disk because when you get close to the surface, you have cancellations from the left and from the right that wash it out.

So the answer is yes, the E field is log divergent, but only the component in the plane of the disk pointing out. The solution of the disk asymptotes to the plane solution in the near disk limit.