Is effective gravity constant over the surface of the ocean?

The Earth is not spherically symmetric, but is slightly flatter at the poles while bulging at the Equator: an oblate spheroid. There are consequently slight deviations in both the magnitude and direction of gravity across its surface. The net force (or corresponding net acceleration) as measured by a scale and plumb bob is called "effective gravity" or "apparent gravity".

But I don't see how this is physically possible.

So is my physical argument wrong, or is the net force on a body actually the same at the poles and equator?

You suggest that for a body of water to be in stable equilibrium, i.e. to have minimum energy, it should have the same gravitational field everywhere at its surface, as otherwise we would be able to move the water around to lower the energy. This sounds intuitive, but it's just not true.

As an extreme example, consider a puddle of water on Pluto. The gravitational field is weaker there, so by your argument we should be able to harvest energy to sending water to Pluto. But that's completely wrong: it would actually cost an enormous amount of energy to do this.

The right statement is that the gravitational potential is the same everywhere on the surface of water. That has nothing to do with whether the field is the same.

Note well: In this answer, I am including the fictitious centrifugal acceleration due to the Earth's rotation as a part of the gravitational acceleration vector. This is quite standard in geophysics.

The equipotential surface defined by mean sea level (aka the geoid) represents a minimum in the potential energy of the Earth's oceans. Deviations from this will result in the oceans having greater potential energy than that of the geoid and will have points at which the waters will flow downhill to realize the geoid. 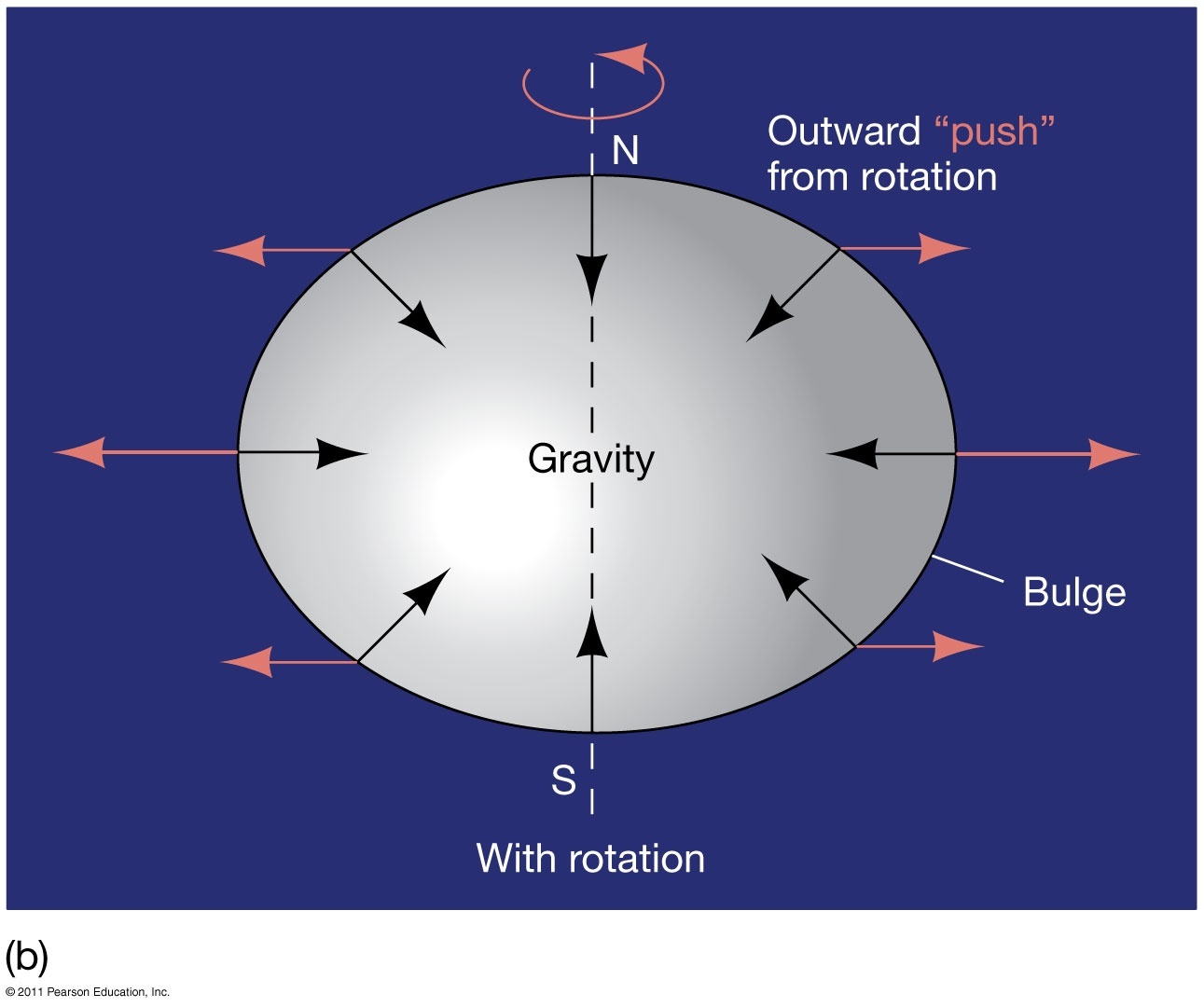 Keep in mind I might have simplified a few things for clarities sake.

As you decrease the moment of inertia of an object, for angular momentum to be conserved, its rotational velocity must increase, and this causes an increase in its rotational energy.

Moving water from the equator to the poles decreases the moment of inertia, increasing the rotational energy. The surface of the water is such that these balance out, and moving water between different latitudes does not change the total energy.

Not the answer you're looking for? Browse other questions tagged newtonian-gravity earth centrifugal-force fluid-statics geophysics or ask your own question.

66
Why is the Earth so fat?
-1
The acceleration in Earth's gravity

66
Why is the Earth so fat?
3
Saturn's polar versus equatorial gravity
14
Why is Earth's gravity stronger at the poles?
9
Distribution of Gravitational Force on a *non-rotating* oblate spheroid
12
Rivers that flow “uphill” due to Earth's rotation
0
Equator water pipeline flow at sea level?